- May 15, 2016
Welp, I know I'm well over a week late on this, but life happens so I wasn't able to sit here and tally up my finds from the McDonald House Sale. I already covered the first two days. I mean, I had the time to have two soda's but I didn't have the energy to write about rummaging through second hand treasures. That's on me. Well, today, I'm writing about day 3 of my adventure. And what an adventure it was...

Friday started off easy enough. It was 50% day, and I went later in the morning, so there still wasn't a HUGE crowd. But it certainly was showing signs of ravaging and crowds. Familiar items still remained unwanted but seriously out of place with very little effort to clean it back up. In fact, I dropped a couple vhs I didn't want the day before and they were still in the exact same spot. I get it though. Everyone wanted the sale to be over with in a huge way. But, darn son, you've got two more days. Make an effort!

So by now the adrenaline is still running wild in shoppers. It's almost reaching a Hulkamania fever pitch. You couldn't stop anyone from achieving flawless victory here. No sir. The hopes for victory were high. The old ladies with their carts were still unforgiving. I described this as being a part of the Royal Rumble on the first day. Today, though? This was a TLC match. People were a little bit more vicious. If you walked away from today with any energy or motivation for tomorrow, you were truly the champion. 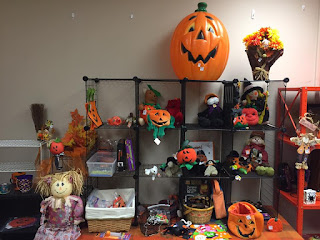 Obviously, The Sale (as us in the know call it) is a great spot for low priced decorations for all holidays, especially Halloween and Christmas. You'll notice from the first day, the room was plump and full of joy. Today, it resembles a normal yard sale inside someone's old dirty garage. This ain't no Garage Sale, son. NO. IT'S THE SALE. 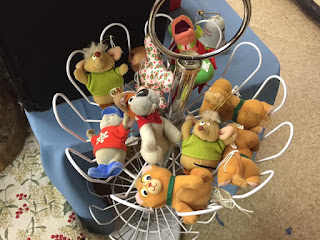 See those awesome Disney characters above?  I noticed these Friday for the first time. Which boggles my mind. I feel like I would've noticed them the first day. That is unless they just put them out on Friday. Which may very well be the case. Either way, I'm glad they did! I love these! For those who don't know or remember, these were holiday ornaments from McDonalds from 1988-1990. Offered around Christmas in conjunction with that year's hottest Disney movie, these little guys were the envy of kids everywhere. They're just too adorable! Who wouldn't love these on their tree or just on their shelf in general? In fact, last year at this very same sale, I picked up a Barnard(he's the chubby mouse in the red sweater) in the box!

I left these guys behind because I figured they'd stick around til Saturday when everything was 75% off. Admittedly, it was a very bold move and could prove to be downright stupid. But I had bigger fish to fry. No offense, Sebastian.

Now there were some other items that caught my eye but the asking price was still a little much and/or they were in lousy shape. My favorite item is a prime example: 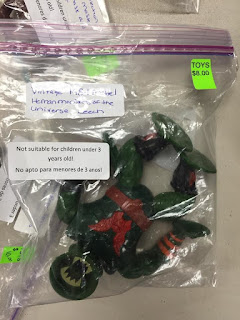 "LEECH. HE-MAN MONSTERS OF THE UNIVERSE". Monsters of the Universe? What kind of bootleg nonsense is this? I mean, they got the name of the character himself right. But...what?!? Look, Leech is a great character but asking $8 for him, is a little much. Even $4 is a hard bargain. Much like the Disney ornaments, I'd leave him behind. I wouldn't have lost sleep had he not been there the next day.


My Friday haul is below. Check them out! 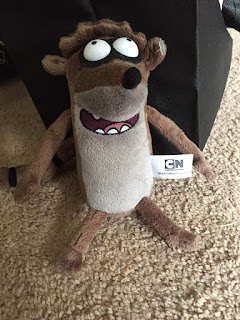 I absolutely love the Regular Show. It's such a fun show. It's like a toned down, modern day Ren and Stimpy. But a little smarter. And in fact, Rigby is my favorite character. If I have to convince you why a rambunctious raccoon who loves VHS and grilled cheese is so awesome, you're not really using your head properly. Rigby now proudly sits on my shelf or is used as a snuggle toy for my bunnies, who love grooming and using stuffed animals as cuddle fodder. Bunnies are weird. 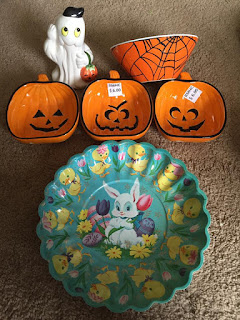 So, the plastic bowl, the chubby ghost and the vintage bunny decoration are all fantastic. They are, but the real victory are those three pumpkin bowls. The pumpkin bowls were something my fiancee wanted but asking $6 bucks each was not something she wanted to open the purse for. I don't blame her. So she left them behind. Thankfully, on 50% off day, they were still available. I decided that I would spoil her and pick them up. I can do $9 bucks. Not too bad!

Well, when I took them up to the register, the lady wrapping and tallying up the items, looked at them and said "$6 each? That's ridiculous. This has to be $6 for the set.". WHAT? Oh my. So, instead of paying 9 dollars, I'm paying 3. That's a huge victory and proof that some workers clearly were already fed up and wanted to be elsewhere. Oh well, my gain. And you best believe we're using these all year round. When I alerted Laurie of this amazing score, she almost flew threw the roof of our apartment. Nomination for score of the year. 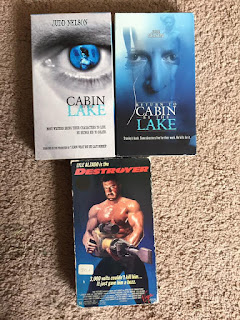 Another random and awesome score. I left behind the Cabin By The Lake movies behind the two days before, but my eBay/tape trader sense kicked in and I decided that a quarter each wasn't gonna break my bank. Solid deal.

The Destroyer was the real surprise. I hadn't seen this at all int he previous days. Trust me, I would've. This is not the kind of tape I'd normally leave behind. I had just discovered this movie at the Salt City Horror Fest, a few weeks before. It looked like it contained every terrible cliche that I love. Jacked up dude running around with outrageously stupid weapon killing people for no reason. And plus, former NFL star Lyle Alzado plays the big brute menace. This movie is so awesome it's ridiculous. In fact, ridiculous is one word I could use to describe it and be honest about it. 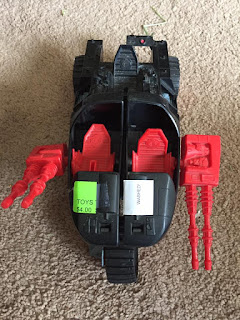 OH YES OH YES OH YES OH YES!!!!!!!!! So on day 1, I described walking around the toy section and wanted to to take a photo of something only to find that when I came back, it was gone. THIS WAS THAT TOY. MY GOSH. I don't know what happened, if someone just left it in another department or what, but here it is. I had the Python Patrol STUN as a kid and loved the living daylights out of it. Sadly, I lost it somewhere and it drove me crazy. Now, it may not be from the Python Patrol series, but it's just as cool! One of the most unique Cobra vehicles that doesn't look like someone vomited neon all over it. Very happy to own this again.