Showing posts from September, 2018
Show all

The Haunts Of K-Marts Halloween Aisle! 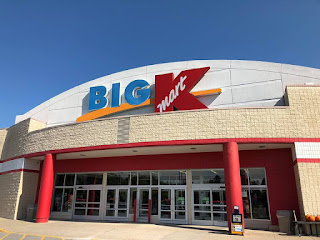 2003 was a pretty big year for me. I had finally got my drivers license, I got my first "real job" that I'd work at for 8 years, I was becoming a little bit more aware of the real world surroundings and I was developing my own sense of independence. I went from expecting my friends to drive me to the video store on Wednesdays for their "5 for $5" rental nights and Toys R Us to look for new MOTU figures to owning the night and driving myself. A great feeling indeed. Everything was coming together and it just made for such an amazing/life changing year for me. What does all this have to do with K-Mart and Halloween? Why am I sharing this and what does it have to do with K-Mart? Well, it's pretty simple. Humor me for a moment, please, and keep reading. You'll understand in a moment. In that year, I had started to redevelop a love for Halloween and there's a lot of factors as to why. I was working with kids and seeing their excitement as well as my cow
The Party Continues...

After a ten month hiatus and working on other projects, I am happy to announce that the HorrorMovieBBQ Podcast is BACK and better than ever! With a subject that can no doubt please the wrestling geek and nostalgic toy fan in all of us, WWF HASBROS! Joining me for today's episode are my friends Myles Arden, admin of the WFIGs Facebook Group and Richard Mayerik , toy-mega fan and producer of the wildly popular and beloved Netflix series The Toys That Made Us. Both guests were fantastic, have a wealth of toy knowledge and had a deep love of these plastic muscle-bound goofballs. Today's discussion consists of: -Faveorite/least favorite figures. -WWE Mattel Retro Line. -Customs. -Recent popularity. -Prototypes. -The infamous Orange Line. -What's our favorite/least favorite action feature? -Why the long face, 123 Kid? And so much more! powered by podcast garden So sit back, relax and breath in the neon fumes of nostalgia! Maybe even bust out you
The Party Continues...

Trick Or Treating With Gene Simmons! 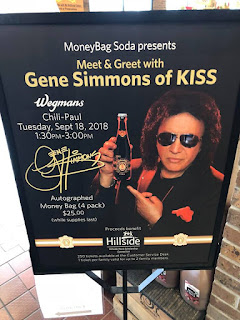 Demon, God Of Thunder, Nuke. Whatever you want to call him, Gene Simmons is a pop culture icon. Whatever he touches turns to gold and his millions of fans around the world are quick to embrace it. Of course, most of that involves putting his face on caskets, toilet paper, comic books, toys, and about everything else possible, but hey, a guy's gotta earn a buck right? He wouldn't be where he is without his campiness and outrageous antics. So why he wouldn't put his name on a soda line? Well he did and he swung by Rochester to promote it and sign! This past Tuesday, Gene came by the local Wegmans grocery store (5 minutes away from my apartment too!) to sign cases of his "Money Bags Soda" and I was right there for the entire event. A front row seat, or front row spot in line if you will. I happened to be in the right place at the right time. Tickets were released on Tuesday the week before and were gone pretty quick within hours. Thankfully, that day I had to pick
The Party Continues... 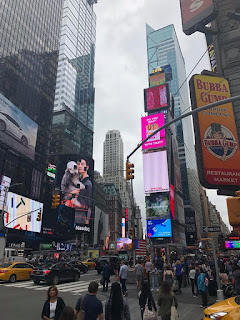 So I've been on a hiatus from this blog, which to be fair I need to take a few times a year to refresh my self. My depression has been getting much worse and my motivation to do anything but hide under my comforter with a giant bag of Doritos or lay on the couch to watch old Growing Pains reruns. It's not like I plan these things but when it happens it affects literally everything in my life, so if I barely have the motivation to change my rabbits litter box, how can I concentrate on producing quality blog content? So with that, I do apologize for the lack of MOTU Month updates. I really had wanted to provide something fun and entertaining, but again, it just wasn't gonna happen. Good news, is a lot of the articles will be held over and used for this coming Halloween, because the theme of some do fit into the spooky season! Next year, I'm gonna try it again and limit it to "MOTU Week". At least just to try and keep it simple and doable. I still love my blog an
The Party Continues...
More posts