Showing posts from September, 2015
Show all

Mannequin 2: On The Move Review 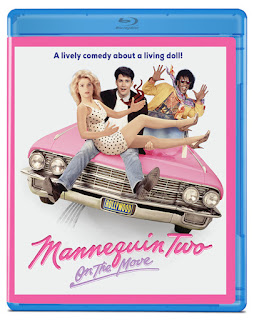 Chances are if you're a fan of goofy 80s comedies, you already own and love the 1987 movie Mannequin, starring Kim Cattral, Andrew McCarthy and James Spader. The title kinda says it all. Boy meets girl. Girl turns out to be a mannequin. Mannequin comes to life, Hollywood Montrose is awesome. Hilarity ensues. Sounds like your normal love story, give or take a few splinters, right? It was panned by critics but beloved by fans of goofy comedies everywhere. Right. Well, in 1991, we were treated to a sequel. "Mannequin 2: On The Move". Starring William Ragsdale, Kristy Swanson and Terry Kiser and none of the stars of the original, except Meshach Taylor as fan favorite, Hollywood Montrose. Ok. I know that's prolly a red flag and the fact that more people blowtorch this critically than the first one wouldn't help either. But, that's what I'm here for. To play the good cop. Fact is, I hadn't ever seen this movie until the other day when I received a s
The Party Continues... 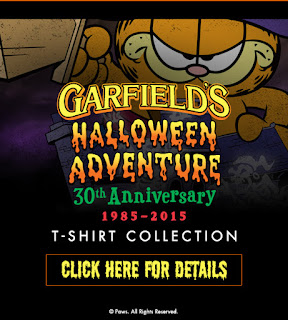 I shouldn't have to tell you how much I love the Garfield's Halloween Adventure special from 1985. I put it up there with The Great Pumpkin, which is my all time favorite Halloween special of all time. It's just a lot of fun and makes me remember a fond and innocent time when life wasn't so serious. It's a perfect companion to the Great Pumpkin and it makes for perfect Halloween viewing. The songs, the scares, the laughs. Perfection! That said, it should come of no surprise at how my eyes almost bulged out when I saw on Facebook that my buddies at Fright Rags was releasing a Garfield's Halloween Adventure 30th Anniversary collection! Oh yes. The masters of horror shirts will be releasing 4 shirts(and a hoodie!) of our favorite fat cat and his canine companion, Odie, as they celebrate one of their favorite holidays. Check them out! So how about that? Who doesn't want a Garfield hoodie to wear while sitting around the bonfire with friends?
The Party Continues... 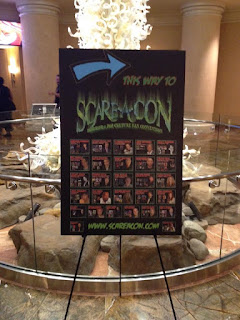 I made the trip to a new convention yesterday. Well, new to me at least. " Scareacon " formerly "Scareacuse" has been running for 4 years now from Turning Stone Casino and Resort and seems to be the one and only horror convention in the Central New York area. I've always been aiming to attend, but every time I want to, something always comes up. But, thankfully this time, I was able to debut. I made the two hour trip from Rochester to Verona on a rainy Saturday afternoon(I've always said it's a very good sign if it rains during the day of a convention). I've never been past Syracuse but I've heard it's a great area. And it proved to be even greater than I imagine. I've never been to a resort or a giant casino, so Turning Stone was downright sprawling. So much to do! Clubs, food, gambling! What's not to love! But, while all that was nice, it was the convention that brought me there. One step into the convention center and I kne
The Party Continues... 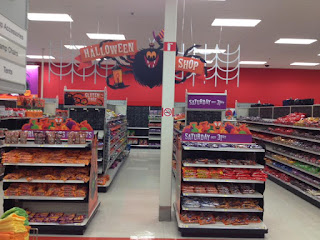 Oh it's that time again. It's been a long and much anticipated wait, but guess what? We're almost in Fall. Time to ditch those shorts and buy some jeans(or some sweat pants) and grab your hoodie. And where there's Fall, there's Halloween. And where there's Halloween, there's...THE TARGET HALLOWEEN SHOP. Thar she is. I tried my best to get a good, clear panoramic photo but using an iPhone 4s to take photos is downright dreadful. But, be that as it may, the familiar feel is there. The goofy yet trendy looking spider is ready to greet you with the biggest smile and a tip of the hat! The candy, the decorations, the exclusive designs. It's all so comforting. A quick story: Last year before Halloween, I had severe back issues to the point that I was pretty much paralyzed and couldn't leave my bed for a good two weeks, so I was pretty SOL as far as Halloween festivities go. On October 29th, I had back surgery and out of everything I wanted to do tha
The Party Continues... 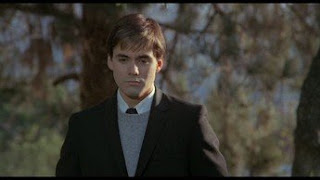 Darrel Guilbeau is a name familiar to anime fans across the globe, but to horror movie fans, he's known as young Ricky Caldwell in Silent Night Deadly Night 2. Yes, before he he became a popular anime voice actor, he was one of the three actors to play Ricky in the movie. So, of course, being the huge fan of the cult classic, I had to find him and chat with him about it as well as his career in voice acting. A few notes before you listen: Quality: Um. Yeah. This was the first phone interview I recorded, so I didn't exactly get the right app to record it. So, you may need to turn your volume up. Questions: I asked Darrel a lot. Personal life, anime, his Saved By The Bell appearance. So, there will be some jumps from time to time, but I tried to stick with a list of questions in order.  Christmas?: Yeah, I lost the audio for a while and couldn't find it. So, if we discuss Christmas, then it's because I recorded this in early December of last year.          Ed
The Party Continues...
More posts