on May 22, 2015
Today's Friday Finds could have been saved for Christmas, but eh...I like this one too much. 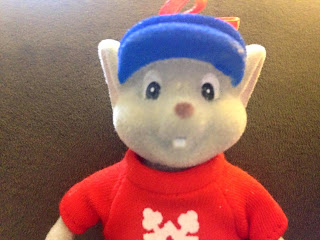 Remember the Rescuers? the classic Disney movie from the 1960's where the two brave mice, Bernard and Bianca, go on a rescue mission? It was essentially like the Avengers for children with mice. It was pretty fun. Then in 1990 they came back for one of Disney's few sequels at the time under the title "Rescuers Down Under". I haven't seen it since then, but I liked it as a kid. I'd probably enjoy now, especially since John Candy was involved. But the memories I have of it involved the McDonalds Ornaments. 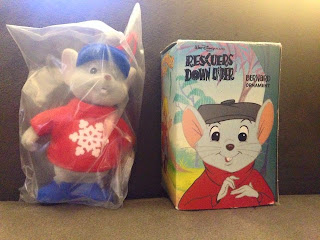 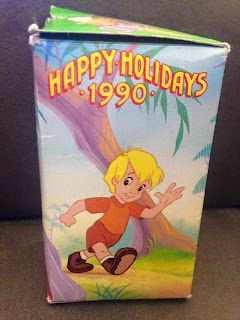 Pretty cool, eh? Never would've expected to see this again, but hey, that's I head to these flea markets and yard sales. Box is included as well, which is even cooler! For 50 cents, I had a hard time turning it down. I saw this and immediately headed back to Christmas 1990. Or Holidays 1990, as it's said on the box.  The ornaments themselves are a hollowed plastic with flocked felt all over it as well as little articles of clothing.  Disney and McDonalds teamed up to do this before with The Little Mermaid and Cinderella's mice. It was a nice little yearly tradition that didn't continue. Which sucks, because other cartoons would've been fun ornaments. Imagine a Genie from Aladdin ornament! 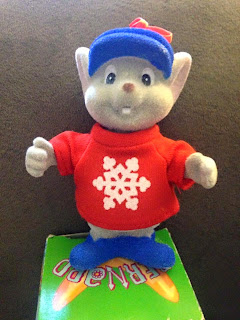 Bernard stands about 2 and a half inches at most(I'm guessing), his head turns and his arms move up and down. It's not a mindblowing ornament. In fact, it probably won't end up on my tree this year and be thrown on the shelf for at least ten more years, but it's definitely adorable and takes me back to being a kid and receiving one in my stocking. I actually received Miss Bianca, but I liked the movie enough as a kid to put it on my tree every year for a few years. I think my mom may still have it in her ornament drawer along with my Where's Waldo ornaments from Roy Rogers and my handmade nWo ornament. That nWo ornament looks as terrible as you'd imagine, by the way.