Showing posts from March, 2017
Show all

5 GREAT VHS From Team Hellions and The VHS Bandits Podcast! 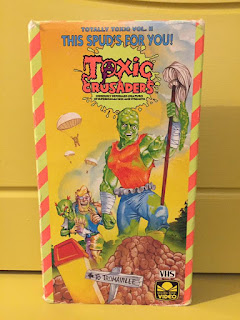 I've been heavy in the vhs-trading game lately. The thrift stores around me haven't been as kind as I would've hoped but thanks to rad guys at the VHS Bandits Podcast and my blogging brother Kevin over at Team Hellions I've been able to satiate my hunger for new and fresh tapes. Because sometimes coming after work to a big package of tapes, is just the happiest feeling in the world. It's like Christmas! So let's dig in! TOXIC CRUSADERS As a young Tromaniac, I'd always look forward to the Toxic Crusaders after school. What's not to love about the Toxic Avenger and a gang of ugly, mutated superhero parodies who also break the fourth wall? I was already on board, having seen Toxic Avenger part 3 by age 8, I was already a fan of anything Toxie. I  didn't get the action figures until I was much older but that didn't stop me from enjoying this show. The cartoon was seen as a lower tiered Ninja Turtles but really stands on it's own. It
The Party Continues... 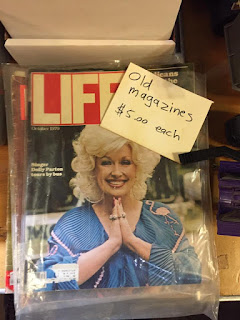 Last week meant some hot Monster Mania action , but today meant some straight up toy hunting. That must mean one thing: THE VILLAGE GATE TOY SHOW. Yeah, I forgot to take a photo of the interior of the show, that's on me. But as a more than fair trade, here's an old magazine featuring Dolly Parton on the cover. Monster Mania provided some great and surprising temptations in the vendor room but this show is nothing but a gigantic nostalgic trip. Toys from your childhood at every turn. A lot of price gouging but more times than most, bargains out the wazoo! There has never been one of these shows where I've walked away empty handed. It's usually something I've been looking for or, more surprising, something I never knew existed. Today was no different. Let's take a quick gander, shall we? MY PET MONSTER BOOK: This wasn't a pick up but local Rochester legend Tony Karakashian actually gifted it to me! The delightful almost-origin story of Monster is
The Party Continues... 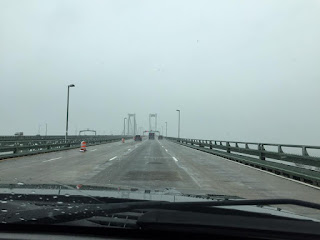 March is here, so it means...MONSTER MANIA CON. It was time for my buddy Andrew and I to pack up the truck and head up to Cherry Hill, NJ on what was to be very cruel weathered Friday morning. We were worried that possible massive amounts of snow and rain were going to stop our trip. But as it turns out, the weather really didn't come into play until after we arrived around 1 pm. Arriving to our destination, we were immediately greeted with a gigantic hug by old friend, Hollie GoFrightly , who is one of the sweetest people I've grown to know through this convention. I haven't seen her in years, so it was great to catch up. I also ran into my buddy and all around terrific human being, Thomas Bryce of the famous ShitMovieFest. It's not truly a convention until the legendary SMF cooler makes an appearance: We headed up to the SMF Suite to eat pretzels and talk blogging, food, wrestling and action figures. And then out of nowhere, a wild Jason Price (of Icon
The Party Continues... 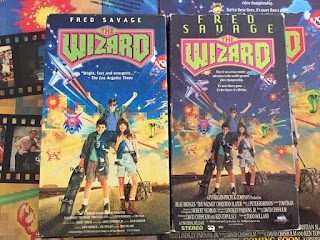 In my love of the Wizard, I find myself hitting eBay quite a bit looking for any and all merchandise and/or promo items. It's a little hard to do. Universal and Nintendo didn't exactly put a lot of promotion and merchandising behind it. Which is odd, considering it was the unveiling of Super Mario Bros. 3, it was a pretty big release for both companies. So when I do find something, I'm overjoyed as well as pleasantly surprised. And just last week I found something and immediately went into panicky "HOLY CRAP SHUT EVERYTHING DOWN I NEED THIS" mode. Now, we've all seen that standard Universal Studios vhs release of The Wizard but I can honestly say that in all my research of this movie and even my thrifting and vhs collecting, I have never seen this release before. Goodtimes release on the left. The standard Universal release on the right. Released by "Goodtimes Video" under license through Universal, I really was hoping for something new or uns
The Party Continues...
More posts