The VHS resurgence is really making me smile. No really. My earliest memories of my life were spent in the local video store with my father. Since that early age, I've had a deep love of the video store experience and collecting VHS in general. And while the posters and VHS artwork in general were amazing, sometimes the advertisements for the tapes were just as awesome. Today, thanks to various places from the corners of the internet, I want to share some of my favorites...


Return to Horror High was a real stinker of a movie that was an early credit to this no name actor named George Clooney, but the blood leaking out of that locker and raw photography kinda makes me want to go back and watch it in order to give it another shot...kinda... 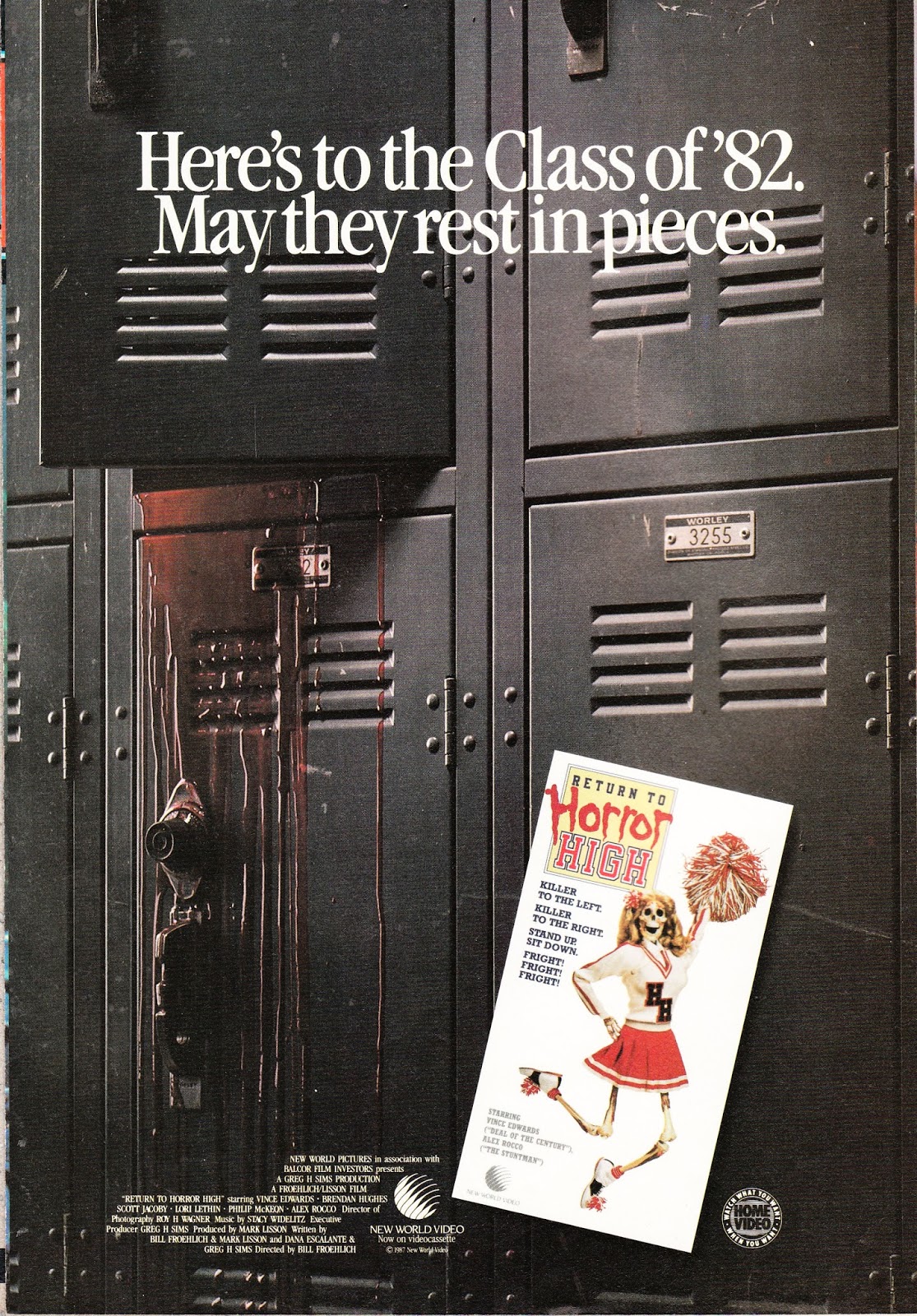 Nightmare on Elm Street 5: The Dream Child is my favorite of the Elm Street series and quite frankly, I'm biased towards ANYTHING involving that movie. Hence it's inclusion in this article. Media was the tape distribution company that put out the entire series showcasing Freddy's shenanigans and would usually put out some bombin' ads. This is one of them. 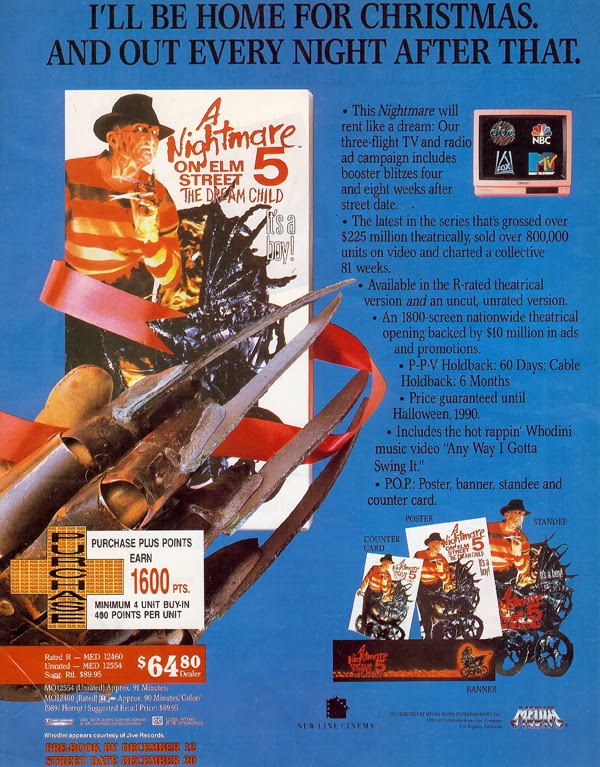 Speaking of Media Home Entertainment, they seemed to have their own advertisement for all their offerings! Look at this awesome selection! 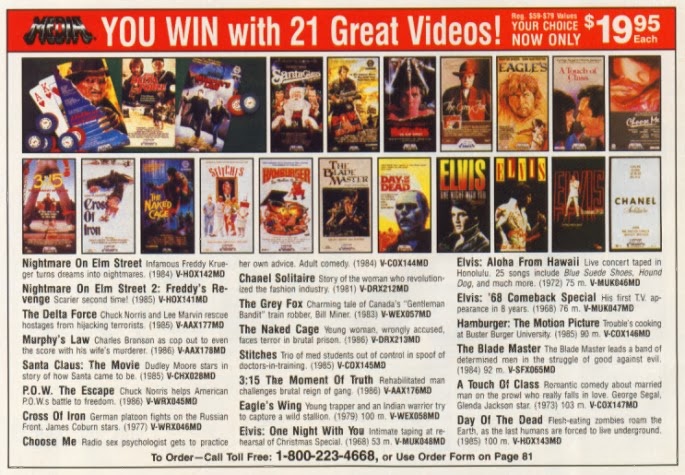 No words can describe the importance of the Ghostbusters involvement of creating the 1980s pop culture landscape. Everything Ghostbusters touched turned to gold. From figures to Ecto Cooler. This cool ad shows the inherent coolness of the Ghostbusters 80s presence with both tapes sitting in a pool of green slime, most likely because they got tired of putting up with Slimer and decided to finally teach him a lesson. 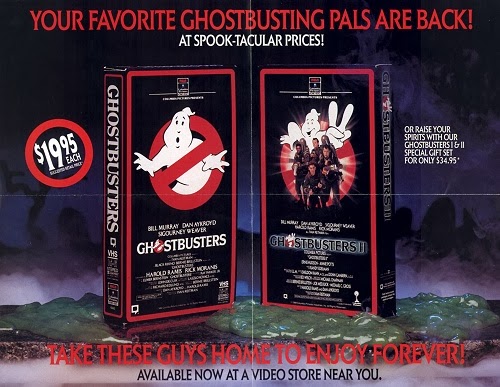 As a follow up, 15 years later, the Ghostbusters DVD ad was just as awesome... 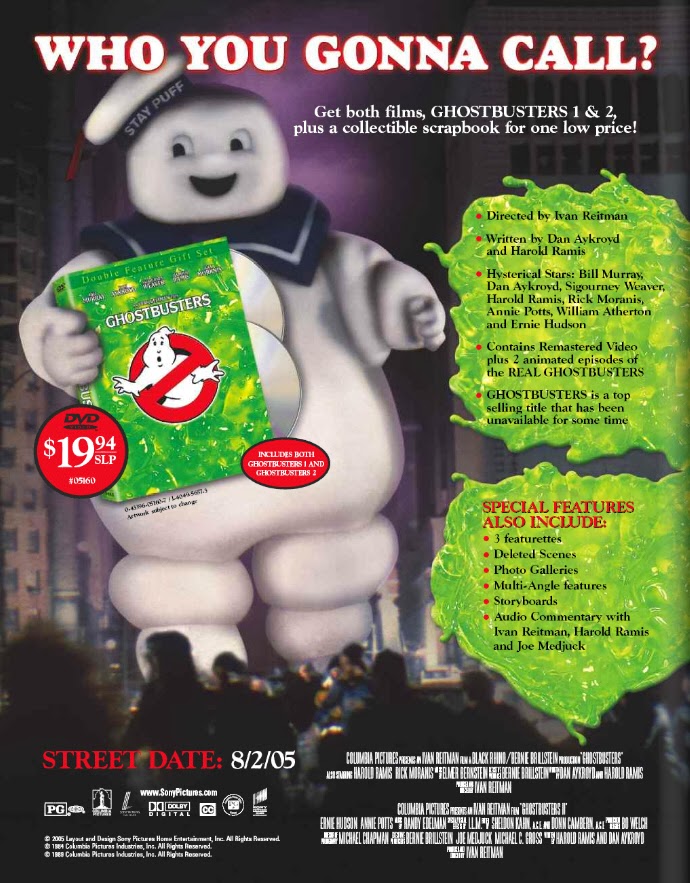 This advertisement is on here, not because I'm a lifelong GI Joe fan, but because I love the awkward conversation between Gung Ho, Duke and Scarlett. And Scarlett's comment of "Everybody can afford a VHS for 40 bucks" is rather hysterical. WHAT? 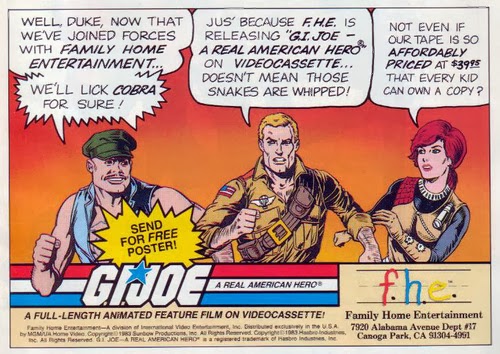 My So Called Life was a show that was one of the more popular show of the mid 90s. Especially with the middle and high school kids that I went to school with. It dove pretty deep into real life problems teens go through and is a giant time capsule of that era. This ad kinda sums it up pretty well(both the show and 90s advertising). 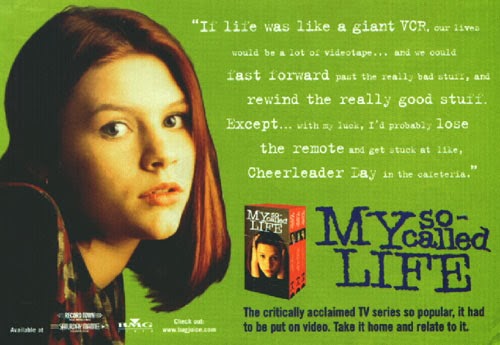 Spock's face is telling the tale. These beautiful tapes for only 10 bucks each? Forget it. That's a bargain on ANY planet! Spock is looking to get himself off that bridge and down to Earth for a VCR for the express purpose of watching himself get shot into the sun in a giant sunglass case. 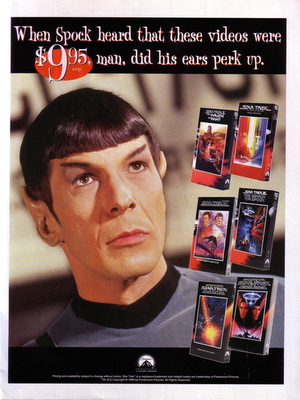 My favorite movie of all time(But we'll dive further into that in a future entry). Batman 1989 delivered one of the most iconic and simple images ever. Throughout 1989 through the time we finally got to Batman Returns being released, that Batman logo was EVERYWHERE. But what a perfect marketing tool it was, huh? That image sticks with you. Hence why Warner Brothers pretty much pasted it on everything. This ad was no different. Definitely just pops you in the face with a fistful of advertising gold and makes you want to go race out and buy this tape! 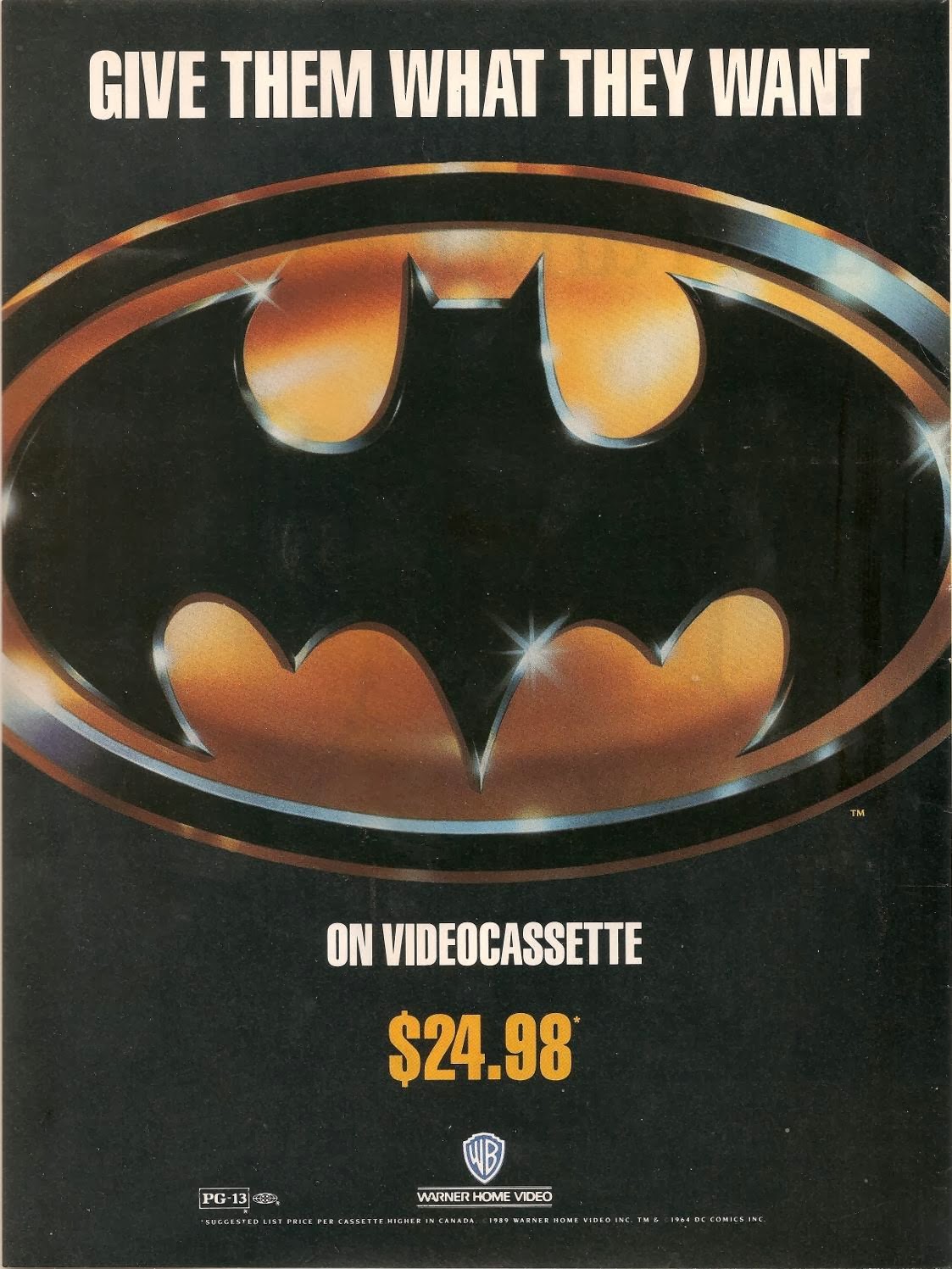 No doubt my favorite VHS ad. My love of Masters of the Universe has been well documented. And quite frankly, this ad is something I've never seen until just a couple days ago. And I'm very happy I did. This ad makes me feel all warm and fuzzy deep down inside my tummy. I really want to make an additional comment about this ad but I can't continue. Just gaze upon it's beauty and be tempted to go out and buy a copy of this tape. 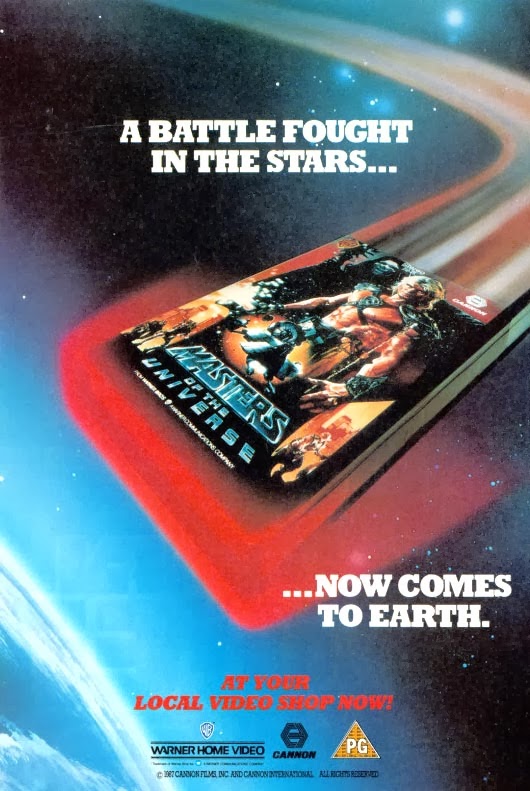 After this, I'm kinda wanting to go out and fill holes in my VHS collection.

It's ToyFair 2014 time! And with that special time of the year in which toy companies give us a good head start as to how much to expect to be in debt. As a toy geek, every fan can expect every company to make us WANT EVERYTHING just by flashing a prototype. After viewing the photos posted by action figure news sites, you can finally start budgeting properly, despite all the promises you were going to properly budget throughout the year. This is the true priority.

Thus far, photos have been trickling unto the internet at an accelerating speed. Photos of amazing plastic goodness have been flooding our Facebook feeds and have been littering Twitter. A lot of great companies putting out their A-Game effort and a lot of fans have already begun their shopping list. Myself included. Holy crap, there's been some amazing stuff so far and I get the sense we still haven't seen the biggest and most monumental announcements. But for now, I've seen enough photos that are making me bang my head on my computer at the thought of how much money I'll be dropping into this hobby. Of all the amazing things we've seen, the following items are the things you should stay out of my way as I go crazy looking for them: 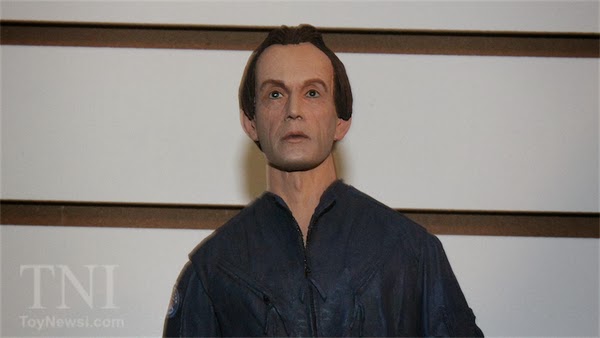 First and foremost, Lance Henriksen is a horror icon. A fantastic human being and great actor. Throughout all his roles in multiple movies, hes only received one figure from Kenner's Aliens line. And while the figure isn't as "Lance Henriksen playing Bishop" as much as it is "That animated series can't use any likenesses from the movie so cover his face up with a weird 90's scifi looking helmet", this figure is actually one of my favorite figures in my collection: 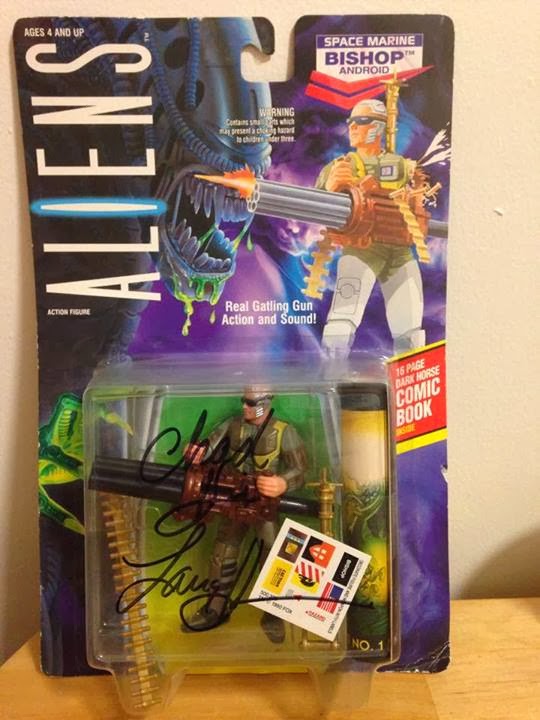 NECA however, is taking the ball and running with their Aliens line. And while Ripley, the assortment of Aliens themselves are pretty exciting, I have to say my love of everything Lance Henriksen will not let me miss out on this amazing likeness. Obviously, NECA's attention to detail will only deliver the best and this is definitely a spot on likeness of the legend himself. 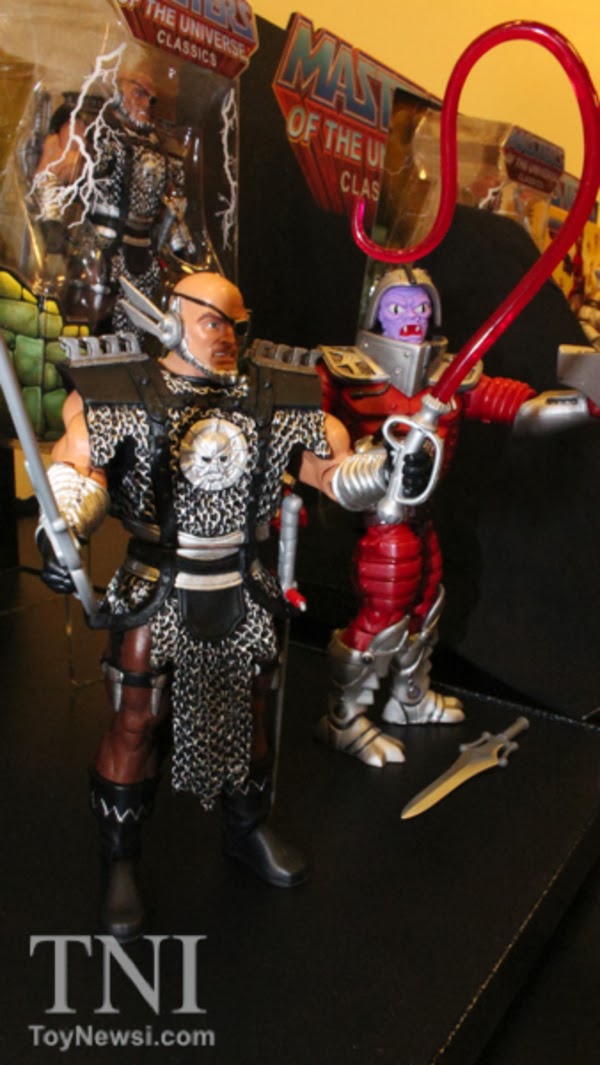 Blade is a character from the live action Masters of the Universe movie from 1987. While he was an original character that was only seen once in the MOTU lore, his legacy of being Skeletor's coolest henchmen(and obvious replacement for TriKlops) lived on. It's been 27 years since we've seen his last appearance in action figure form... 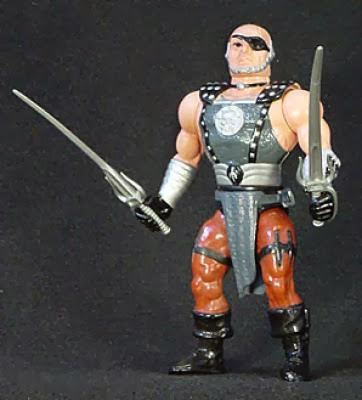 For 1987, it was a pretty good figure, even if he resembles more of a Medieval pirate. And while I never got him(even to this day), it seems Matty Collector will be finally...FINALLY...offering the memorable character the way we've always wanted it. The sculpt is much more movie accurate and faithful to the original source. Actor Anthony DeLongis' facial features have been capture perfewctly into this great figure. And while I've been against buying new MOTUC figures, this is one figure I refuse to miss out on. 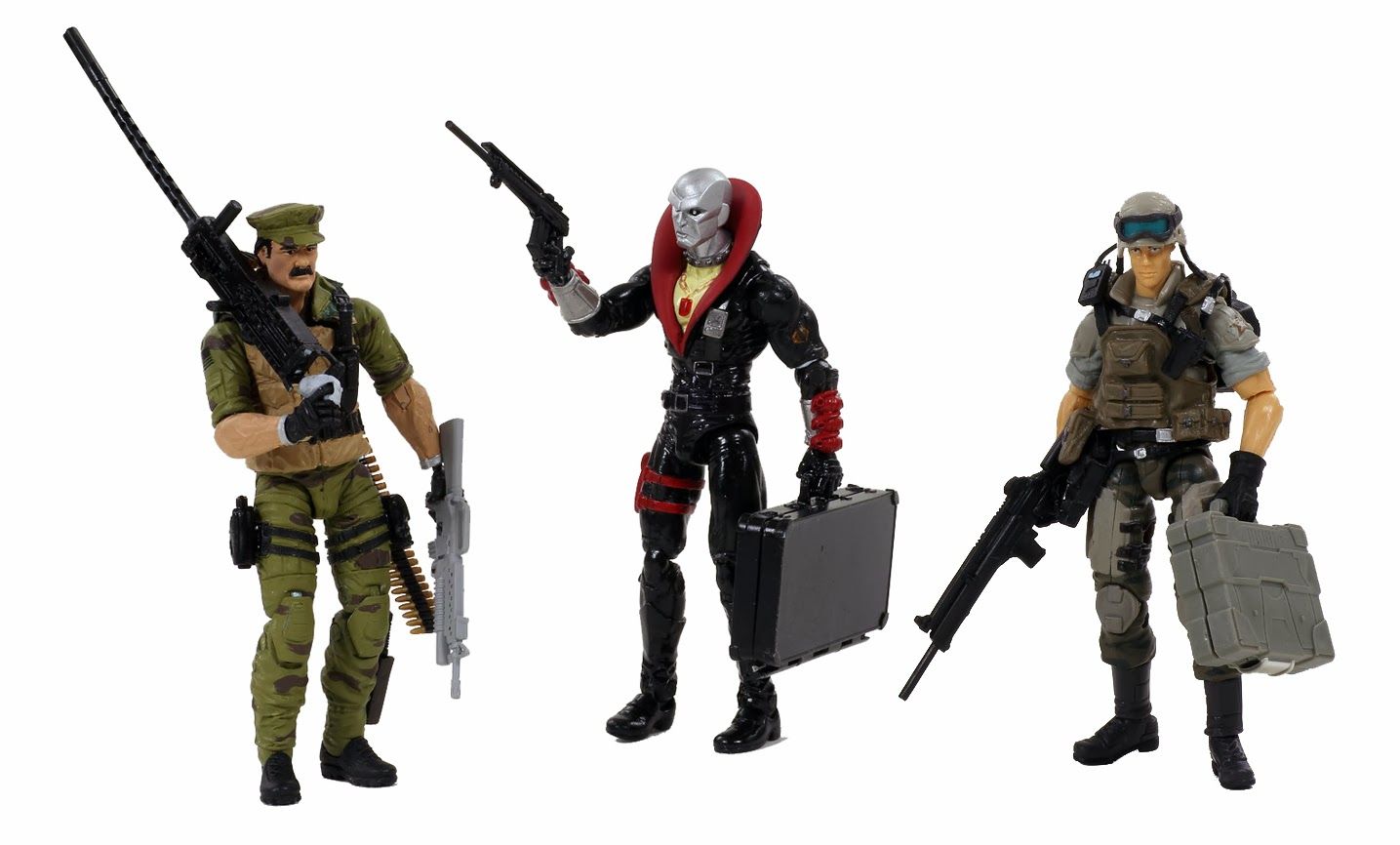 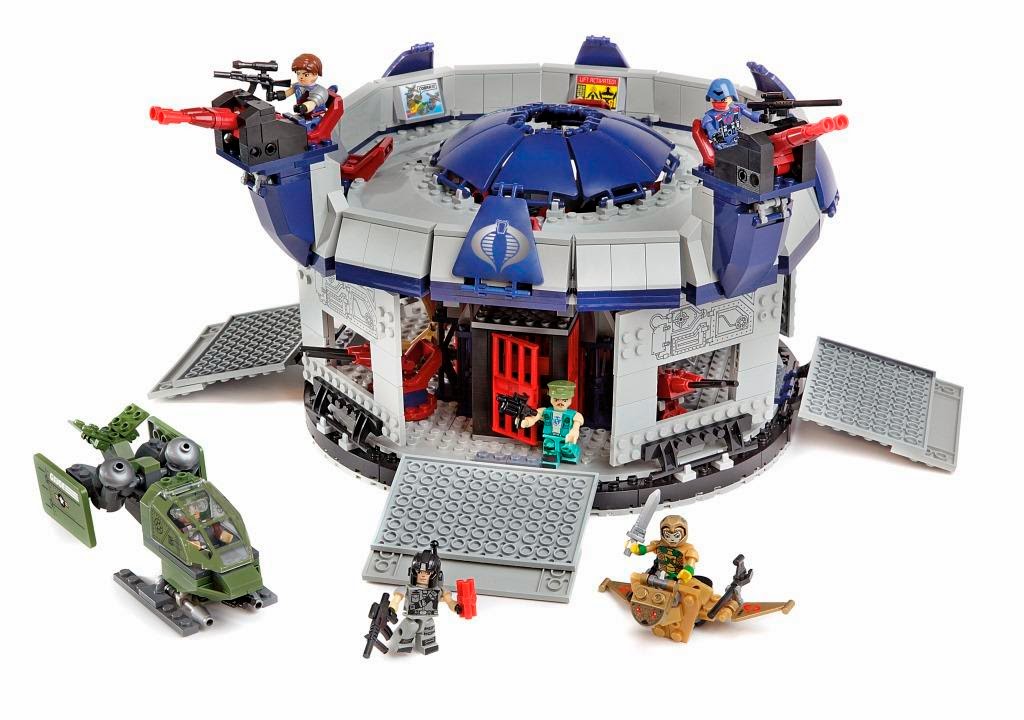 GI Joe's 50th Anniversary is going to be monumental. And Hasbro is rolling out the red carpet for one of their biggest and most successful toylines, and the very first action figure as we know it. In 50 years, you can imagine we've seen a lot of varieties of our favorite characters. But I feel Hasbro is giving us the best we've seen in this line. Through many incarnations, Destro has been one of my all time favorites. Destro was always a GI Joe icon and I've always had an open spot in my collection at all times. We've seen many, many variants of him, but the sculpt you see above may be the best we've ever seen. Simple. His accessories and head sculpt seem to compliment the character in such a great way, it seems like we've never seen a Destro figure before. I sincerely believe this to be the best Destro figure to date.


KreO, for those who may not know, is a Lego-like company that encourages fans to build their figures and playsets. So far, they've made fans very happy with their GI Joe line. And why not? What's better than tiny Lego type GI Joes? Well, I'm glad you asked! A TERRORDROME would be the right answer. Yes. My favorite GI Joe playset will now be available in brick form. Which makes me very happy seeing as I had to sell my Terrordrome a few years ago and regretted it ever since. But this is a fine way to fill that void. It definitely will be a very welcome addition in my GI Joe collection. And I will knock your grandmother down for this. Better warn Nana in advanced. 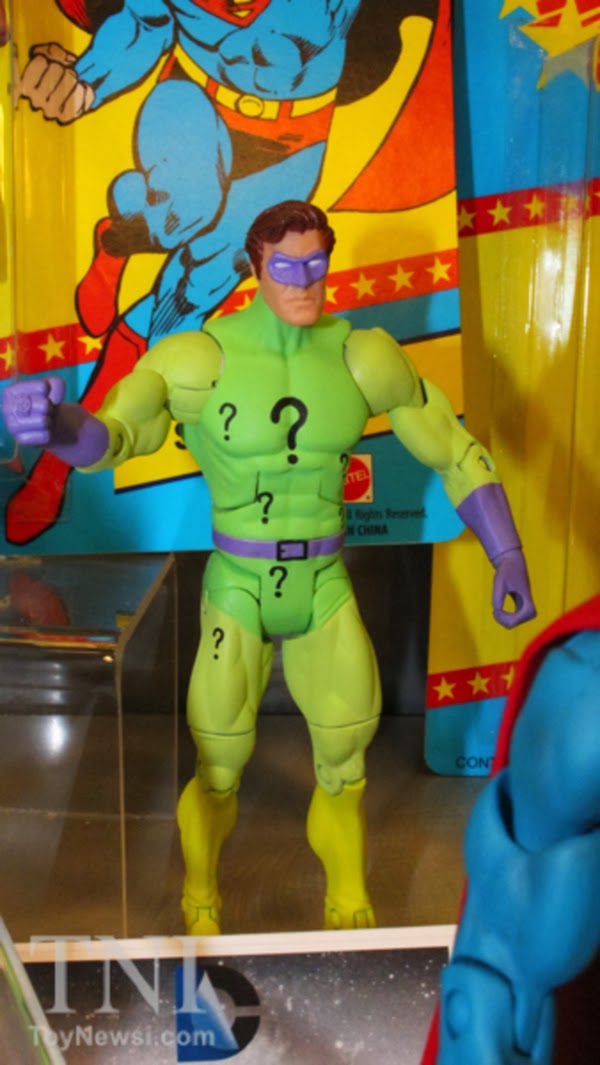 In 1984, Kenner delivered the DC Comics Super Powers line and never looked back. Super Powers is one of my all time favorite toy lines. Great, fun sculpts and representations of DC Comics finest and best heroes. To this day, the figures still hold up and still hold a special place in the hearts of collectors every where. So when Mattel recently showed off their 30th Anniversary Super Powers Collection line, fans almost lost it. The sculpts were a perfect update of the origin 5 inch offerings. While the rumor is only 6 figures will be included in a rather limited run, Riddler seems to be the favorite...well...at least in my opinion.

Back in 1989, a foreign company called "Pacipa"  released a bunch of almost-bootleg quality figures of Kenner's Super Powers. And of all the figures that were released, The Riddler was the most memorable. Why you ask? Well, he was never offered by Kenner. And he was simply a repainted Green Lantern figure. Hence why the Riddler figure you see above is a repainted Green Lantern. Don't believe me? Fine. Check this out. 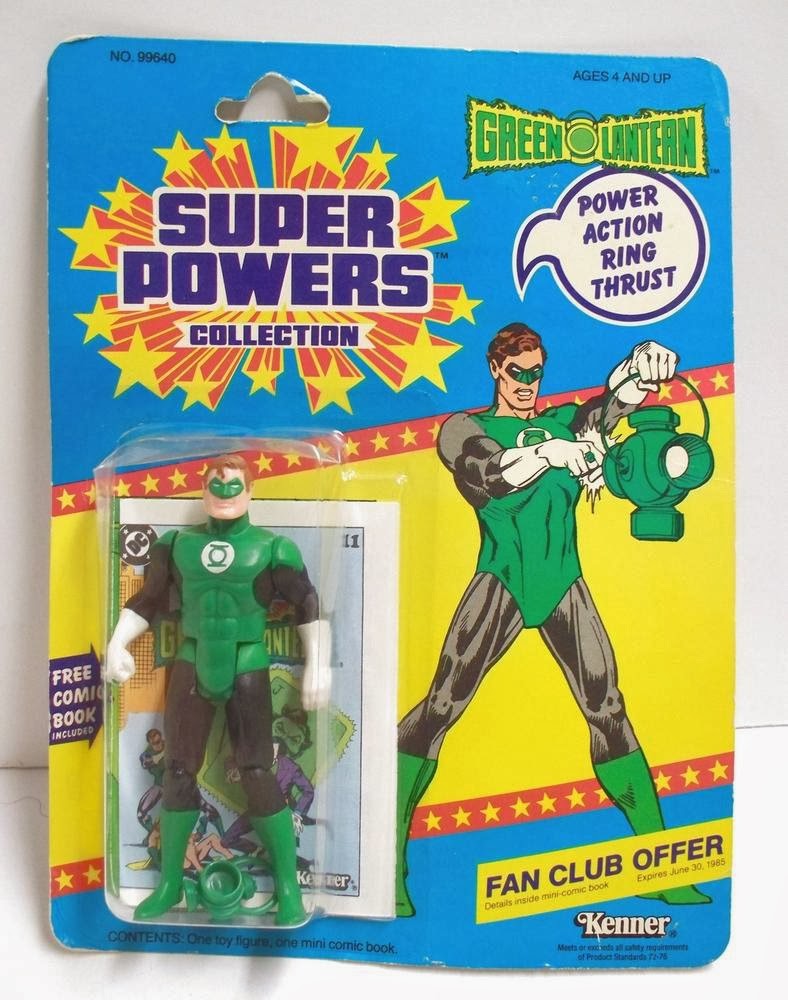 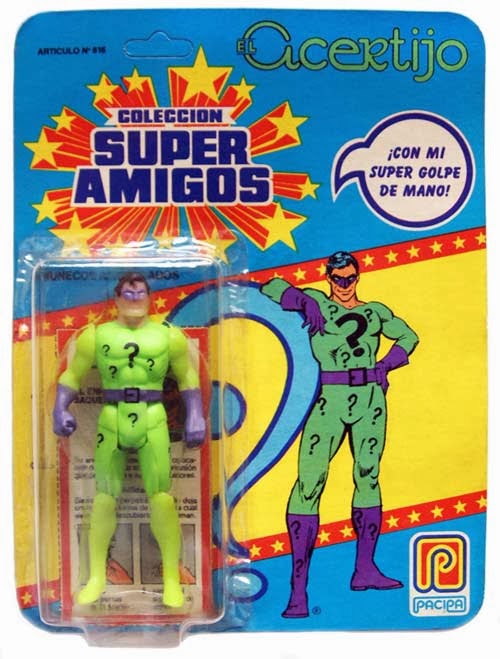 So now, it makes sense right? Riddler's bizarre look makes sense now. And kudos to Mattel for adding that extra special touch to ensure fan satisfaction and total victory. Of all the figures and lines we've seen, the Super Powers 30th may be my favorite thus far. Definitely something to put on the top of the list for me!

And there you have it. There's at least 90 other things I want and would love to fill my house with. But these are the 4 figures that have gotten the biggest "HOLY CRAP I WANT THEM RIGHT NOW!" reaction from me.

I'm really looking forward to the rest of ToyFair week and the amazing stuff that the toy industry has in store for us. This could be the most dangerous year to be a toy fan yet...

Credit to Toy News International for the ToyFair photos and HissTank.com for the GI Joe photos.