on February 24, 2019
Everytime I head back to my hometown in Maryland, I always find a lot of the places I grew up with originally as a child heavily altered and restored or gone completely. Now, new things are great and all but having that familiarity is always a nice comfort. These days, I expect to see more new things but I'm always shocked and pleasantly surprised when something remains the same as I used to remember it. Pizza Hut, for example was one of those nice surprises. Even the dusty and dirty general stores I see back home are a welcome sight. But the most surprising thing I've seen to date? BOWTIE CINEMAS!

Last summer when I drove back home, I had an afternoon to meet up with some friends. Between lunch and grabbing meeting up with some friends that afternoon, I found myself in Annapolis with about an hour or two to kill. So I decided I'd hit my childhood Toys R Us and just for kicks, this old theater. Sure, saying goodbye to TRU before it closed permanently was nice, and maybe I'll write about that later, but seeing this place was the real treat. Almost instantaneously, years of memories came rushing back to me as soon as I walked up to the box office. And the selection of movies ain't too bad either! 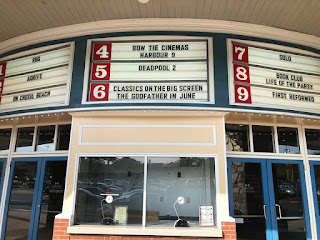 Originally known as Loews Harbour Center named after the local shopping center it remains in to this day, opened in the early 90s. I wanna say 1990. It was the fresh, hip new theater on the block that everyone's older brothers and sister would work at on the weekends and where parents would take their kids for about 2 hours of mindless entertainment and then head to the TGI Fridays across the parking lot for lunch afterwards. This is also the same theater I would be a part of a packed house for Batman Returns in 1992 and a somewhat empty house for Spy Hard in 1996(a show where I lost my WWF gold Pog slammer and still haven't truly gotten over it) and so many following that. When it opened this place was the most high tech and advanced theater with the best plush stadium seating, best sound system and picture, heck it even had the coolest lobby and entrance I had ever seen at that point. Up until then, the only theaters we attended were about 20 minutes away and pretty plain compared to this. Sure, the others were great and held a lot of solid memories like the legendary MarketPlace Mall (which I wrote about many, many years ago) but at the same time the other theaters around us didn't have a sweet escalator to take you into the main lobby! 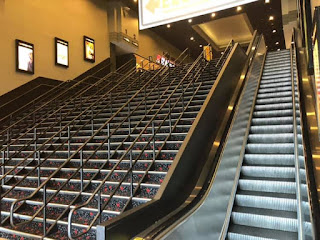 The great thing about that gigantic stairway to movie heaven is while you ride it, you'd get a good look at all the new posters hung on the walls which would usually elicit an "oh man! We're getting a new Batman movie!!!!" or even a "Lost In Space!??! Really?!?" upon first look. I've lost count over the years how many movies I discovered were being released on this rather short trip but it would help start the hype train rather quickly. The one that stands out the most was always Multiplicity. One look at that poster and I said to myself "eeeek. Michael Keaton agreed to THAT?!?!". 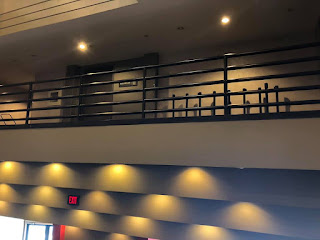 As kids, the lobby felt like a gigantic, futuristic space station. The design and layout made it feel like a huge deal to us and compared to the other theaters, felt almost ritzy. I mean, check out this hallway. It's almost like a catwalk from the Death Star! 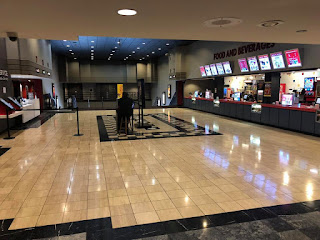 Man, the first time I remember coming to this place was for Gremlins 2 in 1990 and I was instantly overwhelmed. It was clean, spacious and plenty of lights and colors with a huge number of promo standees. And of course, the most enticing part, the smell of fresh popcorn! To my surprise, not too much work was done on the the snack bar or lobby in general. Still looks exactly the same with the shiny marble floor (which I believe my friend Brian slipped and got free passes) and the ticket taker in the middle who barely wants to be there. Looks like there's been some renovation to the snack bar's displays and menu listings, but for the most part it remains just that simple counter with glass windows. I was hankering for some delicious Junior Mints, but not for $4.50. 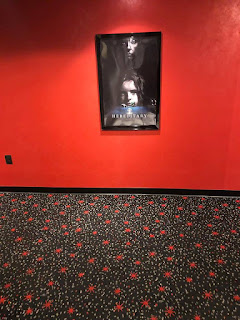 After taking multiple photos to the weird looks of staff, which is a common trend with me when I revisit places back home especially when I'm wearing an nWo tank top and baggy cargo shorts with skull patches on it, it was time for me to leave. I wasn't going to stick around too long since all I really wanted to do was just ride the escalator and take a look around for old times sake. Thankfully, I got the chance to do just that. Since we live in an era where huge multiplexes with arcades and extra fancy food options are the places to go, it's great to see that a small hometown theater is still able to thrive and remain the same it has for years. I'm sure the day will come that they'll heavily renovate but seeing it as I remembered it, from the escalator to the lobby to the amazingly 90s carpeting, was all I needed to bring me enough joy. I'm hoping one of your local childhood theaters also remains the same as it used to and if it does, I'm sure you'll share the same sense of comfort and nostalgia I did when I visited this place.


In fact, if I hadn't seen posters for recent movies, I could've sworn I was there to watch Encino Man all over again, buddddd-deeee.