on December 06, 2018
A few weeks ago, the wife and I went back home to Maryland for Thanksgiving. It had been way too long since my entire family had spent a holiday together, but sure enough, it was well worth the wait. A day spent in the old house, on the same old furniture I spent so many years every Thanksgiving morning watching the Parade or eating cold leftovers the morning after, catching up and making jokes with great people is all I wanted. And it was the best feeling in the world. I'm sure most of you know that feeling I'm speaking of. The feeling that everything is ok for just a few days and any pressure you've felt during previous holidays to entertain, is completely gone. It's a great feeling and very calming. Thankfully, for Thanksgiving changes in tradition are not really necessary (although very welcome).

Now that said, as much as I would welcome new traditions, there are certain things back home that I pray never change no matter what. Whether it's a restaurant, a lights display that a neighbor sets up or...a Pizza Hut...

A Pizza Hut? Why yes. The spot my mom and I would go to every week for Book-It programs or just a random pizza night, has remained in this exact spot for years. Most likely even before I was born. But while everything else around it (mainly the nearby shopping center has changed, this remains the same. It's a spot I hadn't stepped foot in for close to 20 years and during a stop at a gas station in the same plaza, I was determined that this day would change that. Would it be the same, despite the outside being the same exact colors and same exterior design that I'd fondly remember?

The second I opened the rusty, sun faded doors, I was immediately met with that smell that only Pizza Hut produces. You know the smell: marinara sauce, garlic bread, and spices. It's like every heavenly scent you can imagine, but just watered down a tad. The waiting area, seemed to be the same as well.

The manager, seeing me take photos, immediately raced out and asked me if I'd like to be seated and I had to come up with an excuse of "I'm waiting for a friend" just to buy me some time. It kinda worked and he let me taker a seat at an old, creaky booth while I "wait". I wasn't alone though. A huge family apparently met up for a day after Thanksgiving lunch. It was nice to have something distract the manager while I try to take covert photos. And then it happened. The booth I sat in sent me back to 1990 almost immediately: 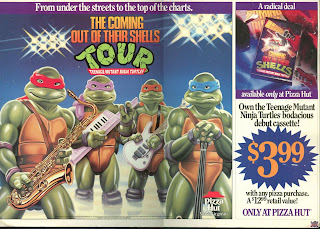 In 1990, The Ninja Turtles were massive. Huge. Larger than life. So larger in fact, that they recorded an album. An actual rock album featuring lots of rad tunes about eating pizza and skipping stones. In order to obtain such a legendary record, you had to go to Pizza Hut. Since I was a 7 year old obsessed with these goofy swollen Turtles, I had to have it. And on one fateful trip, I got it. I proceeded to play the living daylights out of it to the point that I most likely drove my mom insane. But this very booth is where it all began. 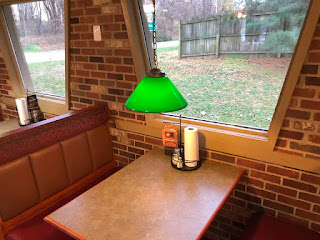 So as I sat down in this booth, the memories of receiving it came flooding back. And then it hit me as to why. This was the same exact spot I was sitting in when the waitress came over and brought it to me. I'm 100% positive. I had sat in all sorts of spots in this place as I ate my personal pan pizzas and all, but this was the exact when I got my audio dose of Turtle Power. So while I look at a menu, I look over to my right and what do I see? 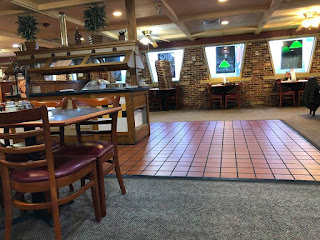 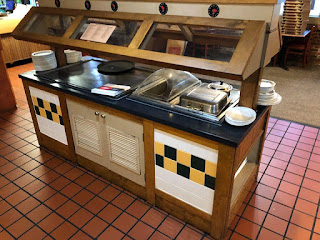 I can honestly say I have NEVER....EVER seen this functioning. For years, I had heard about the legendary status of this buffet but I was never able to participate. And keep in mind, on this trip I was here during lunch hours. So I guess I'm just never meant to eat unlimited plates of garlic bread and romaine lettuce.But at least it's the same buffet. That Ghostbusters checkered pattern was something burned into my mind everytime I'd look over while I ate some appetizers.


I was getting antsy and my goal of getting a good photo of the main area was beginning to be a pipe dream. The manager, noticing I probably was there to not eat crappy pizza, hovered around me a lot and just wanted me gone. So I essentially said I was calling my "friend". Fed up with me, he walked into the bathroom, which I assume hasn't been cleaned since that Land Before Time puppet promo in 1988, and I was finally able to take a photo of this time capsule. Ok, I may have been a dick here by not placing an order, but I had to do this. For myself. Which, I guess is the definition of selfishness. Be that as it may, I got the picture I wanted and I dashed out the door before he came back. 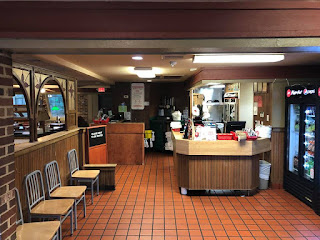 My assumption is everyone has one of these around them. I also assume there's about 92 better options for pizza, I still suggest at least you revisit your childhood spot at least once. Maybe pick up some garlic bread, a pan pizza, or just a Pepsi. It's a nice place to visit but I don't think it's a great place to frequent. Oh and before you ask, yes...they still had the hard plastic Pepsi cups. If I had stayed, I would've indulged. Because it's scientific fact that Pepsi tastes even better out of those old red pizza parlor cups. 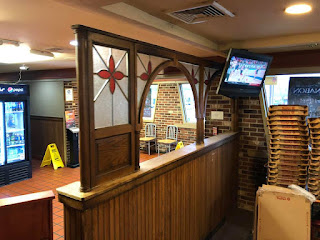