- June 16, 2012
So, there's no real way I can start this blog entry. I'm not a professional writer. I'm not a author. I'm not a journalist. I'm just someone who likes to write what he feels and what comes from the heart, no matter  how silly and trivial or even as major and emotional it may come off as. And today's blog entry is kind of a mixture of Column A and Column B. Ya see, for the past 15 years or so a certain part of my life has been slowly corroding and fading away. And it's been pretty sad...

The building you see above is a former shopping mall called "Marketplace Mall". It's location is in Bowie, MD. which is a rather busy city in the DC Metro Area. It once housed many businesses and many places to eat and spots for all to enjoy. being a child of the 80s and 90s, I spent a lot of time here when it was in full effect. There wasn't one vacant spot when it was at it's peak and the mall was usually full of people. But it seemed that the mid 90s was the final chapter for this long standing mall, a mall that had been serving the Bowie area for a little over 30 years(you'll have to excuse my lack of knowledge on it's exact dates) until Bowie Town Center moved in put Marketplace into submission.

While I don't have exact information or even a lot of photos of this mall when it was thriving, I do have photos of it's current state from a great website called which you can visit at Bowie Living(photos credited to  Bowie Living.). And with those photos I wish to tell a story, share my memories and let you know why this mall meant so much to me.

While I can't paint a perfect picture of the mall, I'm going to try. The mall had a lot of stuff for a young kid to do. A video store, a dollar store, a comic store, a pizza place, a movie theater, an arcade, and a fun playplace called "Sportsland" where I had my 11th birthday. All these components made a perfect place for me to be as a kid. I had such a variety of spots to hit while my mother, who would take me there almost every other weekend to get her hair done amongst other things, shopped around. Yep. It was perfection. Now, it's size lent it a bad hand. Compared to the Annapolis Mall, this was a shopping plaza. And much like any other shopping mall, stores came and went, but the impact on me lasted forever.

Perhaps the longest lasting memory I have is within it's movie theater. While other movie theaters populated the area, this one will always hold a special place in my life. 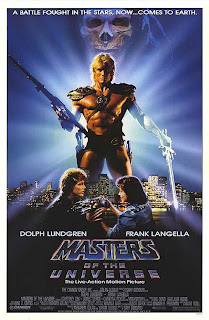 For my 4th birthday, my father took me(as a surprise) to see the big screen debut of my childhood hero, He-Man in "Masters of the Universe: The Motion Picture". When I finally realized what was happening, I was floating on air. I got to see my favorite cartoon hero with my real life hero on the big screen for my birthday. What more could I ask for? It was terrific! I got super wrapped up into the movie that I even began cheering for He-Man very loudly and most likely annoyed the older crowd in the theater. After the film, I came out of the theater bouncing as floating on air. This proved to be one of my earliest memories of my life and a very important point in my life as my father would pass away two years later. I'll forever hold this moment, movie and birthday in my heart. I'd see many movies after this, but none as important. The movie theatre would shut down completely in 1999. 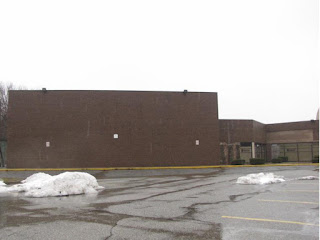 You can see the remnants of the old comic store and karate place.


Years later, I'd heavily fall into the comic book game and fandom. Collecting comics was a big hobby and a very profitable. And of course, many comic stores popped up to accommodate the growing interest of the big comic boom of the late 80s to late 90s. Outside of the mall was a comic store that also dealt in sports collectibles. I remember the owners very vividly being a couple of naive, rude hillbillies. The comic store was a fun spot to hit, especially when new issues would come out every week. And while the owners were not too kind to deal with, the stock and variety was worth it. Trading cards, action figures, sports memorabilia and many other things peppered the store.  In 1998, things went from fun to horrible. The hillbilly couple that owned the store, seemed to devote the entire store to nothing but Beanie Babies. The normal stock remained, but they refused to order anything else but those obnoxious Beanie Babies. However, this was the point in time when Beanie Babies ran the country and everyone was going insane over them. Why? Who knows. Eventually, within a few months, they drowned in their stock of the stupid novelty plush toys and went out of business. A sad end to a really cool store.

Sportsland was another tenant that I hold to a high degree. Sportsland opened in the mid 90s, I want to say maybe 1993 or 1994. It was a real fun place that resembled a family-fun center that had go-carts, arcades, a ball pit, a rock climbing wall and lazer tag. My fondest memory here is both my 11th birthday and my friend Ryan's birthday. My friend Ryan's birthday was spent here and I was the star, ironically. We had a game of lazer tag which involved about 10 people. In the lazer tag arena, there were barrels sprawled across the room. I decided that I wished to become to the MVP of the game(they'd give you a spreadsheet listing who was the best, worst and so on), so long story short, I got stuck in a barrel and it took them a good twenty minutes to get me out. It may not be the most proud moment of my life, but Ryan and I still get a laugh out of it to this day.


There were other stores, as I had mentioned. A Ben Franklin Craft store was at one corner, while a Peebles and CVS at other points. A Mr. Chicken dealt out friend chicken like you wouldn't believe, while a small time pizza place right across the movie theatre whipped up a perfect slice of you-know-what in no time. A Music and Arts store, which dealt with musical instrument rentals was also a very familiar spot for me, only because i could never make up my mind on what I wanted to preform in school. I used to take lessons in the store's rehearsal spaces. The Safeway, which is the only remaining store, anchored and has always been a big part of the mall. But, Safeway now looks like a senior in high school that got held back about 5 times: very awkward and sticking out like a sore thumb.


Around 1999 or 2000, most of the tenants were simply memories fading away. The movie theatre was gone thanks to a movie theatre up the road with a much more advanced setup, stadium seats, technology and many more theaters. The stores slowly exited as well. More and more tenants slowly left. By 2001, it was all over for Marketplace. Just miles away, a new "Bowie Town Center" opened. An open air shopping center with the most stylish and popular stores that make any of the stores remaining in Marketplace look like a mere flea market. by now, many residents were wondering how and when the mall would have it's plug pulled. This mall went from a fun place to go to a dead mall that quickly needed a mercy killing. And it seems that a lot of crime and young kids have gotten into the mall to deface it with graffiti amongst other things. Most of the doors and windows have been boarded and bolted.


In the past few years, many theories have come out on how to renovate or replace the shallow and dark shell of Marketplace. Finally, it's been announced that Marketplace will be demolished this coming summer and will eventually be replaced with a new shopping center.

Now call me stubborn or stuck in my ways or whatever, but no matter what is going to replace Marketplace in it's absence, it won't be the same. I won't be able to share the same moments and memories that I once held in this former shopping mall, but I'd rather have "loved and lost than never have loved at all". And that sums up my feelings and my love for this former mall. I guess I speak for anyone who spent time in Marketplace by saying that when it goes down, it will be for the best. It's best that something new goes up than just staring at an old reminder of better times, I suppose.