- May 20, 2019
Longtime readers will remember The Sale, a rummage sale of sorts where all proceeds goes to the great Ronald McDonald House charity to help families in need. I've attended past sales before at their previous location and always walked out with something special... 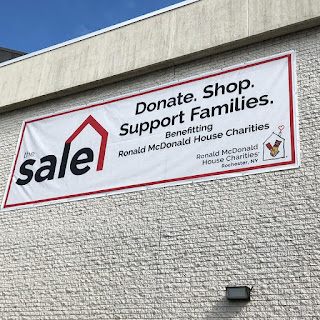 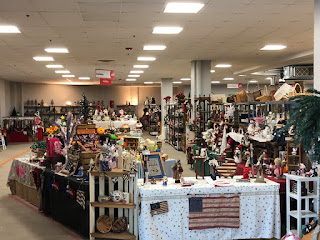 So when The Sale moved to their new location in November, I knew they were in good hands. A former department store in a local abandoned mall is a great spot. A little smaller and a bit more cramped, but at the same time, there's more room to move around in the multiple departments and easier to navigate. So while this was their second show (I made it to their first show at the new spot, but decided not to write a review just because the first show is always going to have some issues and should be graded on a sliding scale) the crew has definitely learned from previous mistakes and made it a much easier experience for all.

Before I continue, I must note that I had a lot more photos taken of the actual building and departments but somehow I accidentally deleted them before I uploaded them. So sadly, it'll be a strictly "check out what I found" entry. And I say we kick that off right....hmm...now. 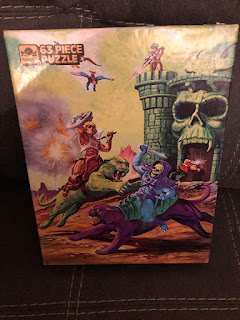 I feel like I find more MOTU puzzles more than I do actual figures in my hunting and that's certainly not a complaint. In fact, I actually look forward to finding these in the wild.  Some of the most fun and epic artwork in He-Man lore are right here on these boxes. They make a fun piece to display and show off. Especially when they feature He-Man being an insufferable prick in the painting. You'll notice his dickish behavior more in these portraits. It's funny as much as it is enlightening. 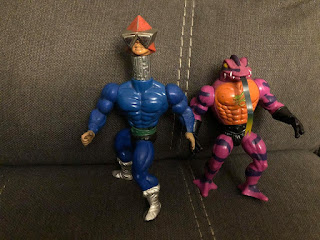 Speaking of MOTU. When it comes to toys at The Sale, action figures especially, are thrown into random baggies and marked for a buck each. I certainly wasn't gonna turn these two down. While Meckaneck isn't the most useful or even most interesting figure in the entire MOTU line, I wasn't going to turn this down. Especially when I saw Tung Lashor, the infamous Snake Man with a super long tongue. While not a fan of the Snake Men line, I think this figure has a great sculpt. But the real surprise was his tongue. Normally this figure's tongue is completely worn out but to my surprise, it looked like whoever owned it before never even used it's feature. I mean that is a straight up dead mint piece. Nice! 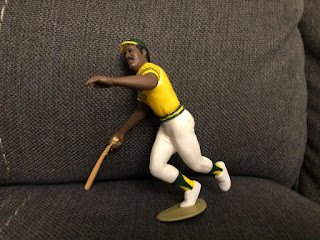 Without going into too many details, Home Alone Day in December will be right around the corner before we know it... 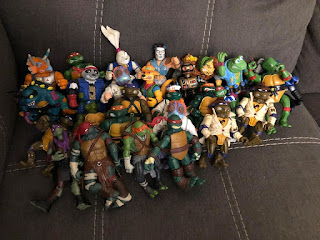 A most radical find! As with the He-Man duo, these figures were all bagged two or even three at a time and only a buck each bag. What, I'm gonna see awesome vintage Ninja Turtles and not turn them down?!?! Look at how awesome these are. This is the kinda find we'd all hope to find at a local Savers, but not at this volume. If you were ever looking to rebuild your collection or even start your kids off, this is for you. My personal favorites? A near complete Casey Jones and a complete Undercover Don! Check them out!!! 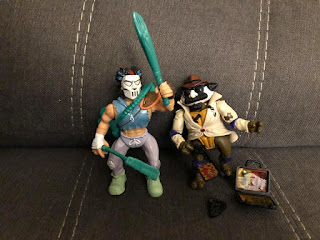 For what it's worth, whoever donated these, whether it was the previous owner itself or just some mom and dad who wanted them gone, must've been super meticulous because there were so many accessories and extra parts for these guys. 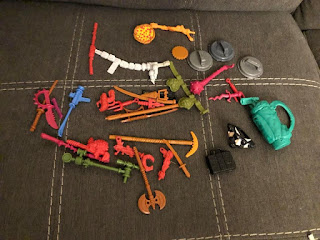 Of course you didn't think I'd leave without grabbing a bag of vehicles too, did you? Come on now! 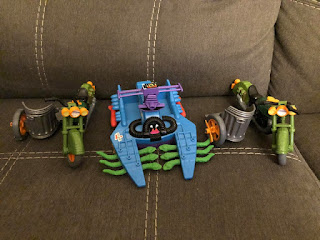 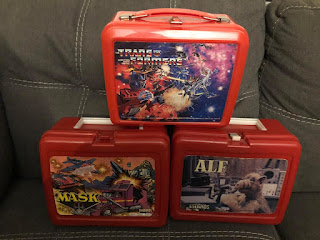 MASK, Transformers and Alf! I would've actually missed these had it not been for an accidental trip behind an opened back shelving unit. These were literally pushed all the way to the back and almost a complete afterthought by staff. Of course, that works in my favor. Believe it or not, I thought I was done by the time I saw these. These are great boxes to have in your collection, especially if you're an 80's maniac but the MASK lunchbox caught my attention for different reasons. 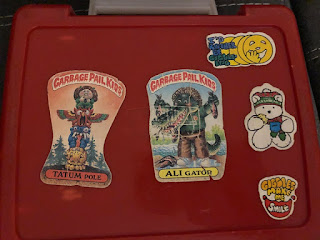 LOOK AT THOSE STICKERS! Garbage Pail Kids, a polar bear eating cookies, and GIGGLE COOKIES! GPK is rad on it's own but the dearly departed and still beloved Giggles? That's some serious joy right there.

Can you imagine the adventures this lunchbox went on? Maybe a season or two at a summer camp? An entire year at school? Maybe a family picnic at the park? Either way, I can only guess the stories along with the insane amount of peanut butter sandwiches and Sssips that laid in this amazing box. When we see lunchboxes, we head back to our childhood, but this? This was a very special lunchbox for sure. Hopefully Matt Trakker was there to defend the child who previously owned this from the grossness that is a warm bag of broccoli. Come on, mom. Stop putting those in the lunchbox. They stink. 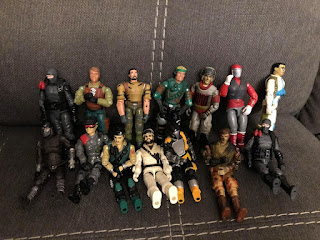 At this point I've found something with He-Man, Transformers, Ninja Turtles and now GI Joe? We're talking some serious childhood nostalgia here. GI Joe is one of my all time favorite toy lines and in fact figures I've never ever stopped collecting no matter the era. I was 14 years old and still playing with these guys as weird and alienating as that sounds. Through thick and thin, I've been loyal to one of the greatest toy lines of all time.

All these guys (and some more that I threw out due to being terrible bootlegs) for only $3? How could I not? I grabbed that bag and raced out. But not before I saw something pretty important... 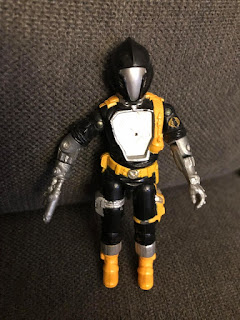 See BAT's arm laser? Finding a loose BAT in the wild isn't the challenge, finding him with one of his arm attachments IS. It's just not possible. It's essentially a toy hunting equivalent to finding a unicorn or a good Ultimate Warrior interview. This was HUGE to me. My excitement for finding this went from 100 to about 1000 in just one glance at his arm. The lack of chest hologram doesn't even bother me. Just finding a BAT with an arm? I can leave happy. Nothing will top this.


OR SO I THOUGHT. 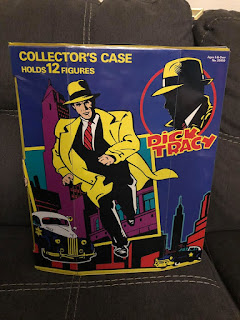 This was shown in a preview photo on the official Sale Facebook page and I immediately told myself that if it were still there by the time I made it to the show, I'd pick it up. To this day, I'm a serious Dick Tracy collector and fan, so any time I can pick up a piece of memorabilia here and there, I'll do it. Now, what I was expecting was just an empty carrying case. What I bought was something completely different...

As soon as I made it to the table to grab it, I noticed it was heavier than I expected. So I immediately opened it up and found... 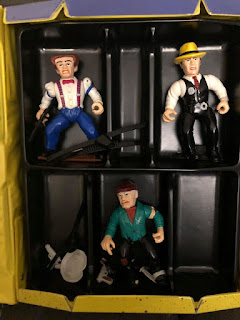 My guess is whoever owned the Ninja Turtles also owned these. All the accessories were here and the figures were in phenomenal shape. I completely became overwhelmed with joy when I saw these. It's not so much the value of the figures but the surprise of finding them all intact with their weapons and other goodies.

So, after I sit down on a nearby couch, I think to myself "well, I'm done for the day.". I mean, I sold my entire Dick Tracy collection a while back, surely these three figures would be enough to kickstart another collection. Flattop? Dick Tracy? The Tramp? That's a solid start right there!

But then I also look at this case and say "huh. I wonder if anything is in the second tray.". Sure enough. There was... 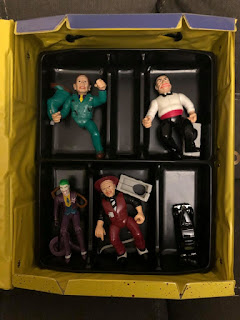 DICK TRACY VILLAINS AND THE JOKER?!?!?!

Armless Joker, but he has his hat and cane, and that's good enough for me! Besides, I have another Joker just waiting to get all PartyMan-ed out! 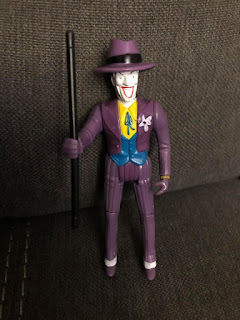 Ok, now I'm getting emotional. Two of my favorite childhood movies and events all in the same case? Holy cow. This is getting to be a bit much for my fragile mind but I'm certainly not taking it for granted. Sure, Shoulders is missing a leg and Joker's missing his left arm, but screw it. I'll never find something like this again!

Wow. It's only May and I'm already finding this caliber of stuff. I could probably throw in the towel on toy hunting this season but if anything this just gets me more and more hyped up. This was a great Sale and while I'm really glad I found some treasures, but I'm also very happy to know all the money goes to a great charity.

The next Sale takes in October. Consider stopping by and grabbing a treasure or two!