What's In The Cupboard?

- March 20, 2019
As mentioned in a previous entry, I've always been a big cup collector. I don't exactly have a good explanation as to why but something about them always brought me some joy. Like a small, cheap souvenir of wherever I went that actually came in handy later. Why drink out of a regular, boring juice glass when I can drink out of a gigantic cup with a cartoon character instead? 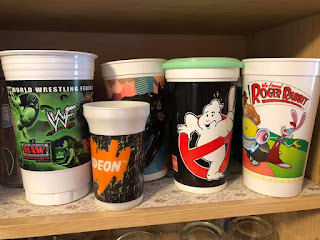 These cups would usually come with a fast food meal, from a convenience store or a a gas station to promote a movie, event or tv show and really made for fun collectibles for kids and adults alike. I mean, how could you turn down a cup with Michelle Pfieffer with your cheeseburger?

So let's take a look at a few pieces in my ridiculous cup collection! 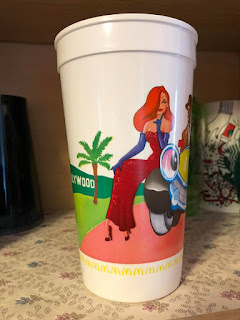 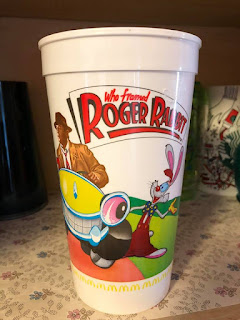 As a kid, I was all about Roger Rabbit. How could I not? It was a movie about a giant cartoon rabbit causing mayhem! I always found it interesting that Roger didn't get the Happy Meal treatment, but thanks to his popularity, he got three cups featuring characters from the movie. A pretty easy sell especially if you wanted to have a cup featuring Bob Hoskins and Jessica Rabbit sitting on your desk at work. The real star of the cup? Benny The Cab, the sarcastic, angry NY cab. We as kids loved Roger, but the adults were there for Jessica and Benny. Facts is facts. 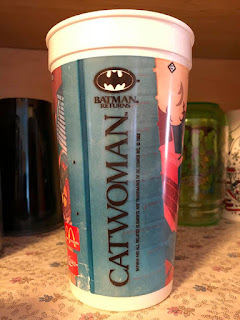 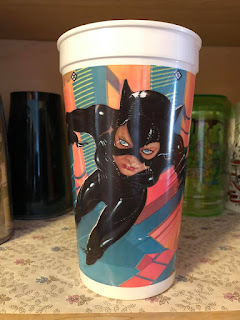 Batman Returns caused quite the uproar upon it's release in 1992 for it's dark and sexual nature. A movie that was being promoted and marketed towards kids probably shouldn't contain underlining themes of S&M and sexual innuendo but hey it happened. And once McDonalds offered toys and cups, parents had enough and demanded Catwoman's image be toned down. Before real action could be taken, we got a series of awesome cups featuring the best of the movie. One image folks remember is the Catwoman cup, which even by Batman Returns standards, this was rather tame. Of course, if you ask me, the Penguin cup is the coolest and most horrifying. But hey, boobs apparently equal outrage. 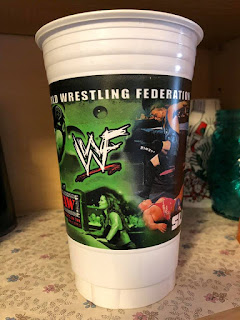 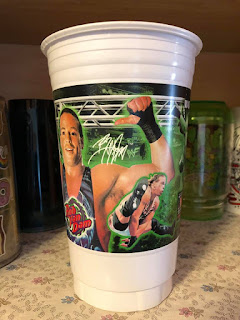 In 2002, the WWF went through a lot of growing pains. They changed the name of the company from WWF to WWE, they lost their biggest star in Stone Cold Steve Austin, and they even split their company into two brands. But, despite all this insanity, 7-11 offered three cups and an awesome poster showcasing their three big shows and three big stars. Superstar wrestler Rob Van Dam was selected to rep Raw, which made a lot of sense since he was one of the biggest and most popular stars of the time. It's also pretty funny that the color is green considering Rob's favorite activity outside the ring was getting blazed. But hey, that helped him put on some of the best matches you'll ever see.

7-11 has done WWE cups since then but I love these the most. They were cheaper, thinner plastic than the other cups I'm featuring today but had a lot more character. The designs and colors and the fact that they featured action shots definitely help them become a favorite. 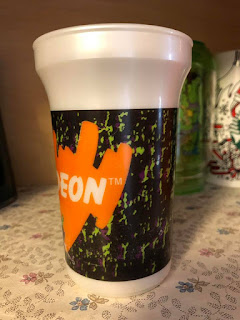 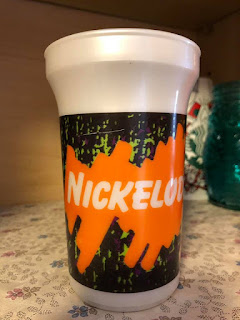 One of the more unique cups I own isn't exactly like the others. This one didn't come from a fast food place or even have a movie or show to promote. This was simply a giveaway item that I received when I went down to Universal Studios in 1997 and I've held onto it ever since. I don't if it's the green and black wrap around design, the giant "SPLAT!" Nick logo or just the fact that it's a cool, sturdy cup but it's always had a place somewhere in my cupboard.

This actually came in a "kids pack" I was given when I toured Nickelodeon. I don't know how they considered me a kid when I was already 5'10 at age 14 but hey I couldn't complain. It was a pretty cool set! It included a pen, a pad, a keychain, and a fanny pack all featuring that familiar logo. Everything else got lost pretty easily except the pen, which I...lost...eventually but this cup? Stuck around for 22 years! I mean, considering Nickelodeon has gone through a lot of changes since then, but this cup reminds me of that era and even before, when I could turn on the tv and watch my favorite Nicktoons. In fact, I may just fill this up with orange soda and watch an episode or two of Rocko's Modern Life later... 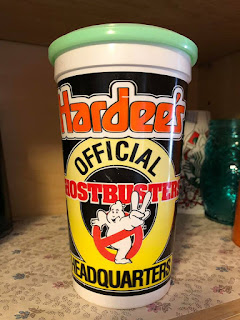 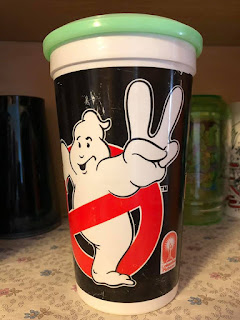 My favorite of the lot!


While Batman owned the summer of 1989, Ghostbusters 2 also had a very strong hold on it. I'd say...second place? Maybe in my household at least. Of course, my father was a bigger fan of Hardee's and Roy Rogers so we always found ourselves there. And luckily, I was able to score one of these cups during the month period (June to July 1989) that the promo was run. Of course, over the years, it would fade and eventually get worn out from use, but I was able to score one a few years ago.

If you didn't grow up with a Hardee's near you, forgive me for gloating, but in my opinion, this was the greatest promotion in fast food history. So much so that I actually went more in detail in a previous entry! As cool as the other stuff being offered was, the cup was the real star. A giant, sturdy cup featuring the GB 2 logo right under the Hardee's logo. Sticks with you with for a long time and instantly sends you back to 1989. On top of all that, while it didn't come out during Halloween, but it definitely carries that tone. I'd say it's an acceptable Halloween cup as well as a great addition to a great piece of Ghostbusters memorabilia.

The good news is as cool as these cups are, they're not that expensive. You can usually find them at flea markets and thrift stores for less than a buck. If you're looking to hop in to collecting these, check your local spots. You'd be surprised in the amazing cups and promotions of the past that you may have forgotten!