Last year, I discussed my love of Hardee's Halloween Hideaways, which was a fun part of their kids meal promotion for the 1989 Halloween season. But what about the adults? Sure, us kids were covered, but the rest of the family needs to have some fun too! In this instance, there's only one team they could call...

Even as a kid Ghostbusters 2 was my favorite of the two movies. No seriously, it is. I think it's a fun scifi movie, while the first one is more comedy than anything. Plus, it had a better song.

Before you tell me I'm wrong, keep in mind the Bobby Brown song was actually his own and not lifted from Huey Lewis.

So, being a huge fan of Hardees and Ghostbusters 2, I knew I had to at least own SOMETHING from their offerings. My father and I would go often enough that I could still get a kids meal and my father would be able to get me something Ghostbusters related. A perfect crime. I won either way.

Before I start rambling some more, check out the commercial to get the see the grand offerings:

That commercial just reminds me of everything from my childhood I loved. In fact, pardon me, I have to watch it again.

Noise makers, a lunchbox, Jello Molds and a cool collectors cup! It's a pretty solid spread of Ecto-ladened goodness. I'm pretty sure I had the lunchbox, don't think I had the noise maker, but I certainly remember the Jello Mold. Why? Well, shortly after I brough it home, my mom attempted to use it at my request. So she filled it with Jello for me. Whiled my mom is normally a champion of instant jello, for some reason it tasted very, very un-jello like. I can still recall the bitter taste and how some of it stuck to the plastic molding and never came off. It tasted like stale raspberries, tears and failure. Maybe there was just a mix up, maybe my mom sabotaged it on purpose, maybe these molds were just not to be used, maybe Vigo interfered somehow. The mystery may never be solved. But while it sucked that it failed, it was pretty cool to have a partially jello-ed out Slimer on my plate. 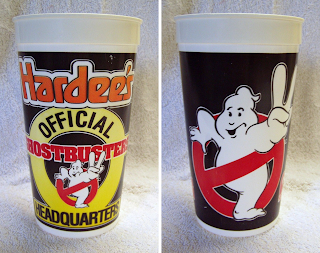 I also had the cup which was pretty basic. Just a giant Ghostbusters 2 symbol on one side and a "Official Ghostbusters Headquarters" on the other. I've actually read that these are a favorite amongst Ghostbusters collectors and fans and it's easy to see why. Hardee's must've loved doing cups, because I tend to remember having a LOT of plastic drink cups from Hardees, including Marvel Comics, Days of Thunder and cups featuring a Moose drinking a cup of CocaCola. Yes, I'm serious, take a look...


I'm only including that because I have virtually no interest in doing an entry on these Hardees cups. You'll thank me.

The only other thing I'm leaving out, is Hardee's offered a "Slimer Sundae" of which I have no recollection, but the Ghostbusters Wiki says it was bubblegum flavored. I'm kinda sad I don't recall this. A green, bubblegum flavored "slime" all over the ice cream? My gosh, I'm wanting that right now!

I really have fond memories of going to Hardee's in general, but add the Ghostbusters, and it's even better.

Also, a very Happy Halloween to all of you! Whatever you may be doing tonight, I hope you all are being safe out there and very happy. Bring me back some Reese's!


PS-here's a photo of the late, great Yvonne Craig celebrating Halloween as Batgirl. Why? Because it's Halloween. I also never need a reason to post photos of Yvonne. 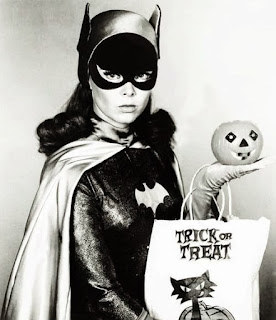