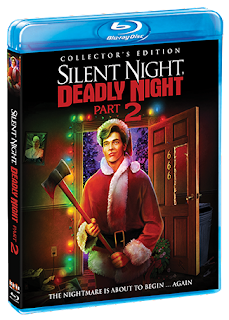 Synopsis: Ricky is being released from a mental hospital. He takes with him the terrifying memory of his brother Billy's death and the memory of Mother Superior who brought about his brother's demise. For Ricky, starting a new life means avenging his brother's death, which sets him on a blind journey of relentless revenge, leading ultimately to Mother Superior. And when he gets to her, not even her faith will be enough to stop Ricky as he follows in the family tradition of Christmas carnage.


Thoughts:  As most people know, I have a pretty personal connection to this movie, that you can read all about here. So when it was announced to get a blu-ray release I was shocked and overjoyed. For those in the know, it was never gonna happen. The original rights holder was always adamant on never releasing it and the only way it was going to happen was if he was going to die. Well, someone must've convinced him that it was a foolish idea, because here we are. After all these years, this movie finally gets a release dedicated to the fans. Because it's the fans who will truly appreciate it the most.

Now, let's get this out of the way: This is a VERY BAD MOVIE. There's no slicing it any other way. It's terrible. I've been saying this for years and stand by it. However, it's a CHARMING VERY BAD MOVIE. There's so much to adore here. The over the top performances by all the actors, the silly gags, the crazy kill scenes and of course...GARBAGE DAY, the scene that spurred a million views on YouTube and reintroduced a forgotten movie to a whole new generation of fans. Even though this movie is only half an original movie, due to the notorious use of the first movie, this is still a movie you should go out of your way to pick up. It's always been a movie that doesn't take itself seriously and has fun with itself. Whereas the first one was straight up brutal and nasty, this movie is more fun.

For a movie that relies so heavily on sourcing the first, it still stands out, despite Lee Harry's lack of direction. Eric Freeman's over the top performance is really what you wanna watch it for. As great as fellow cast members Liz Kaitan (who was believed to have been missing for years as well but appears on the extras) and Ken Weichert the jokey and perverted "Chip", this is Eric's movie. For a role he has been somewhat ashamed of, I'm happy to see him embrace it as of late and this set is a great tribute to his legacy in film history.

Of course, alongside a great transfer of the movie itself, the main feature is just one of the draws. The special features are packed to the gills with holly jolly goodness! 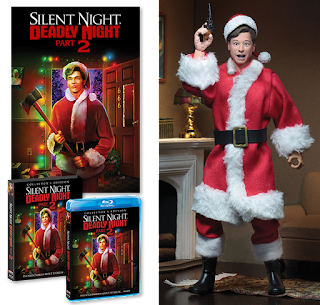 For those who consider themselves to be the ULTIMATE Garbage Day fans, Scream has a fun offer for you. Similar to their offerings last year with the first movie, an exclusive action figure and poster will be included in your order! Now you can reunite Ricky with his brother Billy and make as many crazy killing sprees as you can! I can't wait to receive this very animated looking Ricky and put him next to all my favorite figures. Although, it'll be weird looking at the shelf and seeing my friend Eric stare back at me.

Perhaps I'm biased, but I love everything about this release and the bells and whistles that come with it. As someone who has been a fan of this crazy, b-movie for a long time, I'm so thrilled to see the perfect release for such a memorable slice of cheese. This gets the highest of recommendations from me. A solid effort by the gang at Shout Factory!

To order your set, head over to Shout Factory's site here!