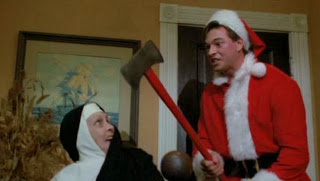 Since March, I've been holding onto information that most people have wanted to know. And it's been very difficult for me to share it for a variety of reasons. But, finally, I'm presenting the second and final part of "Finding Freeman".

Back in May, I wrote an entry called "Finding Freeman: Found?" where I teased that maybe, just maybe, supposedly lost actor of the famed Silent Night Deadly Night 2, Eric Freeman had been found. It's been a good 7 months since that article and quite frankly there's a few things that need to be revealed:

First. In early march, I received an email out of the blue from someone claiming to be Eric Freeman. Now, I was skeptical at first. Anyone can pull this "I'm a famous person" on the internet these days and it can lead to problems. But I was intrigued. And quite frankly, I've spent a lot of time and effort on this so I took a risk to find out if it was him. Here's the email I received:


"A friend of mine told me about your site some time ago.He told me his brother was trying to put some pictures of me up on your site and no one believed him. When I look at some of my clips from that movie, I dont recognize myself. I am not ashamed of that movie,Truth be told, I was trained with the mindset of less is more. I was a good actor before that project and all the work that followed. I do regret not paying attention to my instincts and instead listening to Lee saying "give me more"  and all of those urgings from Joe Earle to go over the top.I wasnt  born in No. Carolina and Wikipedia has it all ass backwards. What can you do now.All this bullshit talk over the years, Where is he. Did he die of embarrassment. They should pull his Sag card .Fuck you. It's actually simple, Life happened when I was making plans. It is so strange to see this movie still has a following, Little kids to this day run up to me and ask if I ever did a horror film. My friend and I were laughing at the thought of ricky having a comeback. He's been in an insane asylum for the last twenty years.If you would like to write me ,feel free. Take care, Eric"

Skeptical? Sure you are. But like I said, I was curious and I've wanted closure since discovering this. The worst case scenario would be it wasn't him and I was being played as a fool. But I had to pursue. After a few more emails, "Eric" gave me his phone number and told me to call him and he'd be willing to answer any questions I had regarding SNDN 2. Well, this got a little more interesting.

So, I sat on this number for a few hours. In between doing laundry and organizing the apartment, I decided to just go for it and give him a call. Nervously, I dialed the number and I can tell you that I've never been so nervous waiting for someone to pick up on the other line. In fact, asking out my middle school crush wasn't as nerve wracking as this was.

Someone picked up. Could it be him?

I introduced myself and gave my little spiel. This person then went onto formally introduce himself as Eric Freeman, famed slasher movie obscure legend. His voice sounded a tad bit like the Ricky character we saw in Silent Night Deadly Night 2 that we've been watching since 1987 and within a good two minutes of us talking, I could tell it was him.

We started talking about the blog entries I wrote and my motivation behind them. We also discussed the Facebook group that was run by Eric's friend from high school who found it funny the internet was making a huge deal out of a small comment on a dvd commentary. Eric told me that he found it hysterical that there was such a huge fanbase regarding this movie considering the movie was pretty screwed from the start and how he was just a normal guy that just stopped working in the movie and tv business.

So the important question had to be asked: If the comment on the dvd commentary was true, just what happened to him and his career?

According to Eric, he just became burnt out. Plain and simple. He felt he was going as far as he was going to go in the entertainment business and just didn't care to pursue future projects. Apparently bad experiences and projects that never came to fruition helped him cement his decision (including a sitcom on NBC that was halted due to the late 80s writers strike).

That's it. Nothing shocking or exciting. Just a guy who didn't care to continue acting. No muss, no fuss. But why was there a comment made by director Lee Harry in which he claims they couldn't find him? Eric said he was just so out of the scene that no one had his number and no one bothered to even try to look for him. According to him, he didn't even get the DVD of the release.

Discussing the production of the film was extra fun for me. I've been a fan of it for years and to hear the stories was pretty darn cool. Eric's statement was that the production was screwed from the start and director Lee Harry gave him little to no direction on what to do as far as his character, his motivation, so on, so on. Further corresponsdance with Mr. Harry via Facebook resulted in this quote:

"He's right about the production being screwed from the start; chalk that up to low-budget filmmaking! And I don't disagree about my direction of him or any of the other actors; I was more concerned with camera placement and having something to cut together later! We all made rookie-mistakes. There were no crew shirts or wrap party or much of anything in the way of extras on the shoot. When I got the call from Anchor Bay about doing a commentary, I had only remained in contact with Joe Earle and Jim Newman (Dr. Bloom). None of us had heard from Eric in years and would have loved to have him involved in the DVD. I did receive a copy which I would gladly give to Eric if/when I see him again. I bought one of the Fright Rags tee-shirts online and wear it proudly."

Something I found interesting was Eric claiming the ending to the movie was vastly different. Instead of just chopping Mother Superior in half, Eric suggested the end involving chopping the door down, tackling Mother Superior (I compared it to pro wrestler Goldberg preforming the Spear in which he tackles someone and knocking the person down) out of her chair.

Eric, continued saying that his interest in the movie has waned due to not receiving even a VHS copy of its initial release and there was not even a crew shirt or any promo items given to crew whatsoever. I brought up the Fright Rags shirt recently released and he expressed interest in owning one specifically because he has no mementos.

As far as the online community embracing his silly performance, he was embarrassed about it at first, but has embraced it as part of his past. He says the Garbage Day legacy doesn't bother him anymore and is quite frankly overwhlemed that people care enough to try and find him. But, at this point, he has no interest in branching out and doing conventions, autographs, interviews, and the like. He also found it important to point out, his number has been online and there are people that have gotten ahold of him, but he has no interest in becoming a member of the online community, i.e. Facebook, Twitter. Eric's privacy seems important to him.

So that's it. The highlights of an hour conversation with Eric Freeman. I had no idea I'd hear all these stories. I just expected maybe, a 5 minute conversation and that would be it. Eric seemed pretty appreciative of my respect for him and my willingness to give him his privacy.


There's the closure to the story of Eric Freeman. In recent attempts to get a hold of him, Eric seems to have gone offline and my luck of getting ahold of him via email have been no luck. I guess Eric just prefers it to be that way and my hopes of Eric reading this post can only be via google I suppose.