on October 11, 2017
I don't think there's a horror fan my age, or maybe even a bit older, that wasn't glued to a Goosebumps book in their younger years. RL Stine helped create a world of humor and horror in a kid friendly environment, which isn't always the easiest task. But he did it, and an entire generation still gets all warm and fuzzy whenever they think of these classic books. It's nostalgia, sure, but it's also just a lot of fun, carefree escapism which is kind of hard to find these days.

As Goosebumps rose to popularity the insane amount of merchandise followed. School supplies, Halloween costumes, toys, fast food premiums, pajamas and so much more. If you were a diehard Slappy fan, I'm sure you slept in a room featuring a poster of your favorite dummy. Not creepy at all, but hey, I had a poster of the Stone Temple Pilots on my wall, so I'm not judging you.

So how can you truly prove your love of Goosebumps? Where's the glass ceiling? Does owning a pair of Goosebumps sunglasses shoot you to the top of the rung of fans? Eh, impressive indeed, but not quite as impressive as what I'm going to share with you today. As revealed in my most recent article, I revealed I picked up a beautiful piece at the McDonald House Sale...I give you...THE GOOSEBUMPS FAN CLUB KIT. 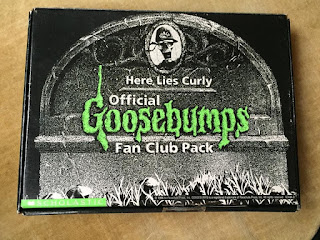 In an eye catching green and black box, everything a Goosebumps fan could ever ask for is right here. My research tells me this isn't the first edition, as 2 earlier editions version came out in 1994 and 1995, packaged in a coffin box! I like it! While the box I picked up isn't as clever as the casket, I'm still a big fan of the design! I can't help it, I love neon green! 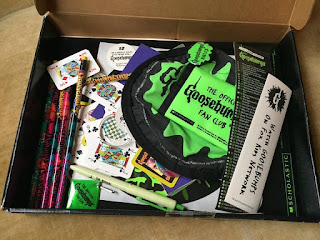 You open the box and you're pretty much overwhelmed by the contents. I was expecting a lot of cool stuff, but not this. A treasure trove of beautiful green and black colored goodies all for me! Now it looks like a few items are missing such as a newsletter, welcome letter, note pad, a pencil topper and maybe a story tape (can someone confirm that for me, please?) so what you see is going to be a bit incomplete, but make no bones about it, this is still a fine, fine piece. 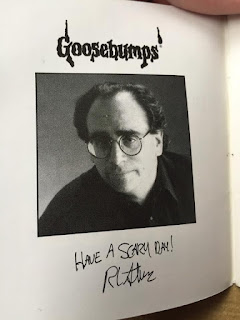 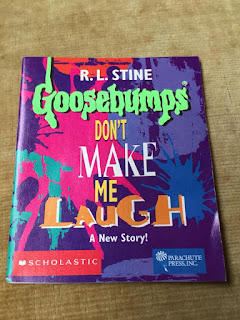 First piece in the box is a short story written by the man himself, RL Stine. The first page is stamped with the face of terror and a fake signature. While not his real autograph, it's still pretty cool. And the short story is a nice addition. Just think. If you're a Goosebumps fan and have a new story made only for the fan club, you are essentially in a level of fandom all to yourself. You can say to your fellow Goosebros and say "Hey did you read 'Don't Make Me Laugh'? Oh you didn't? Oh..." and be justified. It's ok, no one will blame you for putting your nose up at those who haven't read it. Heck, I may head to a local country club and start snubbing those in attendance all because they haven't read this. Fools! 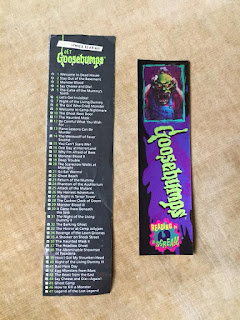 Next up is an item to be expected. No fan club is complete without a bookmark, and if you expected a fan club based on a book series wasn't gonna give you one, brother...you're insane. A lenticular rectangle to hold your spot, with that glorious logo and the Killer Mask? Oh my gosh, this could very well be the greatest bookmark ever!

Also included, which I assume was a part of the newsletter, is a checklist of all the Goosebumps releases up to that point. Now, you can be the most organized person in the world, but a checklist will always help anyone hoarding these books. 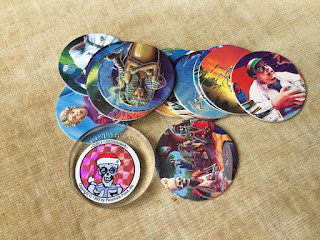 POGS! Of course! It makes perfect sense!!!! One of the greatest 90s relics, next to Yak Backs and Hammer pants! In 1996, POGs were still a very popular item. I had a giant bucket filled with these and still collected them. the bigger the collection, the better the chances you had at beating people. I...think? I don't know, but I do know that if you had these milk caps, you'd be scaring the competition. Your opponents caps would be as a good as yours! 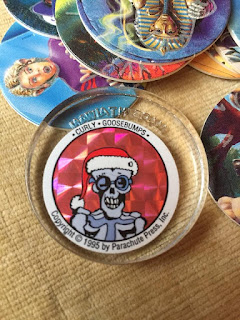 Oh and worry not! If you left your Slammer at your friends house last time, you get a Christmas Curly Slammer in this pack. No one stands a chance when going up against a skeleton in a Santa Hat and sunglasses. In fact, just take your buddies caps and go home now. You won the second you picked up that Slammer. Your goofball friends will never be able to compete with their lamewad 8-Ball Slammer. 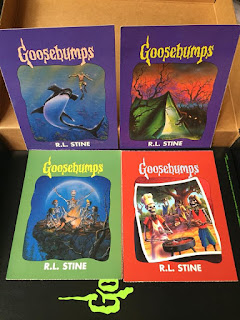 Some nice postcards featuring some fan favorite covers. What better way to write Aunt Zelda and update her on your wild prep school days than with a "Say Cheese and Die!" postcard? She'll never see it coming and probably will disown you but it'll be worth it. 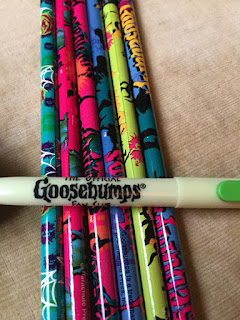 Well, heck son. You gotta write on those postcards with something! The Club has your back though. 6 pencils and a glow in the dark pen. I was downright amazed to find these pencils remained unsharpened. If I were the original owner, I would've definitely used all of them up by now. And I can promise that pen would be completely out of ink as well. 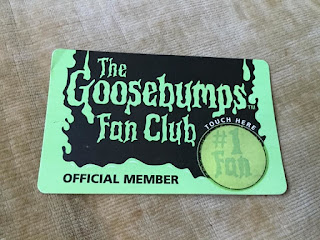 Along with the previously mentioned bookmark, you simply can NOT walk around saying you're a fan club member and not own a club card. Oh the egg on your face if you dare brag about being a member and going through your wallet only to find you left the card at home. You're on your own there, brah. Besides, this card declares you to be the "#1 Fan"! How could you leave it behind? The fact that you're not being buried with this is baffling. 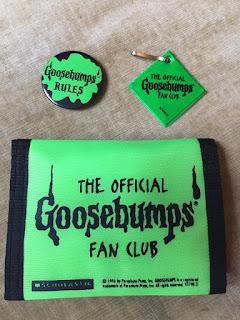 So you don't have a wallet for your card? You do now! A velcro neon green wallet is YOURS! Not a bad idea, considering you left your membership card, sillypants! Now if you DO have your card and someone doubts your loyalty, all they need to do is see that wallet as well and they'll nod their head in acceptance.

Also include are a button and a vinyl keychain. Nice items for your backpack. I bet you'll be able to part the entire hallway at school like the Ref Sea with these hanging off your bag. Show those "cool kids" who's really in charge! They may have dad's credit card and a really good lawyer, but they don't have these! You're going places, kid! 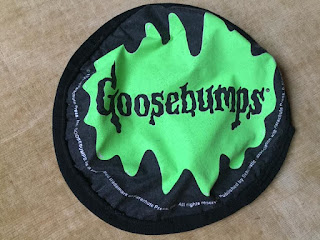 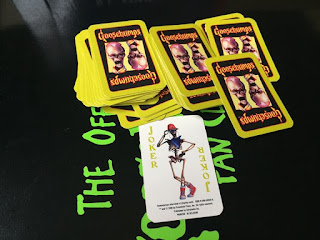 Looking for some fun activities outside of reading a book? Well, sure! We all need to give our eyes a rest. Thankfully with these items, you'll be ok! A mini floppy frisbee and mini playing cards. If you're gonna hang out with your friends on a hot summer day and have an Ecto Cooler or two, you need some fun throwing the old frisbee around. Plus, those mini cards are great for a road trip and you got tired of hearing your friend brag about hooking up with that girl at the bar. Don't worry, Curly's got your back. He won't judge you like your goofy friends did when you wore that Kriss Kross Looney Tunes shirt. 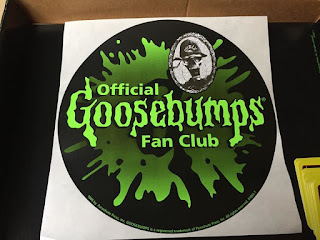 A giant sticker, the size of a frickin' dinner plate! I gotta tell you guys, as a sticker fan and someone who likes to cover everything in stickers, it's VERY tempting to put this on my fridge or my car. Look at it! It's huge! Now a days, huge stickers are very popular but back then? Eh. This is one of my favorite pieces and the most tempting to use. You'll forgive me right?

No? Fine, I'll stick to the wallet. 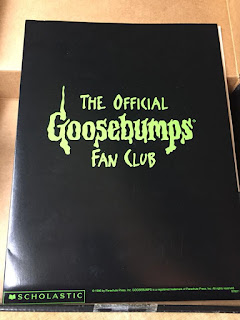 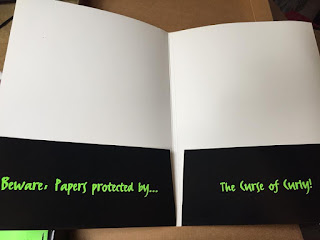 Whoa dude. I'm not going anywhere near that folder! If I'm looking to cheat off my friend in class, I better think this through. He may have better grades, but his papers are cursed! I imagine it would be like in Prom Night 3 where if the teacher tried to give you an F, Curly would magically erase it and make sure you got an A, despite you totally deserving an F. You know what you did.

So thar she blows. A great fan club kit and fun items for only the most hardcore fans.Pretty sure I would've beaten up my own grandmother for this if I had to. Thankfully I didn't have to. I just had to find it laying in a pile of forgotten Halloween goodness.