- February 21, 2017
Toyfair is that time of year where toy collector starts drooling. Sadly, they also hear their wallets crying and whimpering at how much they'll likely be spending on plastic crack throughout the year.It is rather upsetting but hey, man...gotta get those Batman toys! 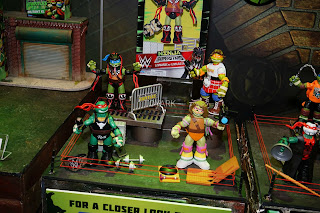 The TMNT/WWE mashups have been extremely popular amongst fans and kids of all ages. Collectors have been grabbing these up, despite their rather hefty $20 price tag. This kind of creativity brought out the kid in the older generation and gave the younger generation a fun new way to play with their Turtles. The entire collection is fantastic, but since Roddy is one of my all time favorite wrestlers and heroes, I have to have to him specifically on my shelf. And of course, Mikey is my favorite Turtle, as if you'd be surprised. Best of both worlds? You bet! 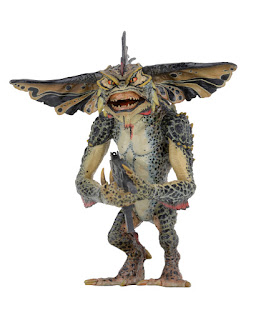 It's kinda hard to get something new out of an old property like Gremlins 2. Most of it all has been done, with the exception of say a Calmp figure. And not giving us a John Glover figure may be the biggest crime in the world. But until then, I gladly accept this Mowhawk figure with a machine in in it's place. The paint job, the sculpt, the fact that it's going to have a hinged jaw, makes it a nice take on a classic character. 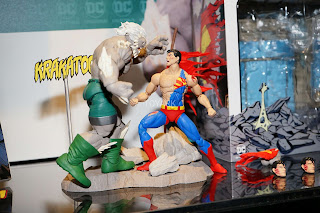 If you weren't around for the Death of Superman, it's absolutely impossible to describe the impact of what this story meant to fans and the comic book industry. It was absolutely massive. How could it not? SUPERMAN WAS DEAD. Well, sort of. Spoilers. D'oh.

This set by DC Collectibles is the perfect depiction of that last stand between Superman and Doomsday. In fact, the second it popped up in my feed, I thought it was a statue. I may be more excited for this than anything else. 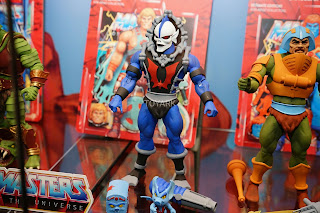 Uh...well...ok, maybe Hordak is what I'm most excited for. A perfect cartoon accurate sculpt and paint job of my favorite bad boy from the MOTU universe makes this the most desirable of all the MOTU releases, imo. And you gotta love the accessories! I love that he comes with an interchangable arm cannon. That's a nice bonus. He also comes with his sidekick, Imp, who was a favorite of mine in the cartoon as well. As much as I love the Horsemen design 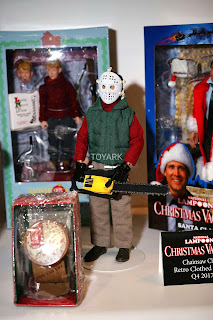 The showstopper is right here. When NECA presented a fantastic Clark figure last year, I have to guess a LOT of fans were either removing the hockey mask from their Jason to recreate the famous homage scene. But now we're getting not just Clark with the mask BUT THE CHAINSAW TOO!

I have a problem. I buy everything that has "Christmas Vacation" on it. I would buy an electric drill if
it had Chevy in a Christmas Hat. Someone make that happen. That would be awesome.

I've always been a fan of The Warlord. He's just such an awesome and imposing guy and had a great look. Sadly, his "crazy space gladiator" only got one figure(which I reviewed here). Jakks released a very low rent version but offered nothing in the accessory range to make it stand out. I'm so embarrassed and angered by it, I'm don't even want to post a photo of it. Thankfully, Mattel is giving us the Warlord we all have hoped for. That is one of the most impressive figures I've seen by Mattel in some time. It just looks like it's ready to shoot laserbeams out of his eyes and break your back. This is the figure I've been waiting so long for and I will happily buy as many as I can. Why? Well, I kinda wanna make him some sort of stormtrooper for that Hordak I just wrote about. And doesn't the Warlord look like he belongs in the MOTU universe?

Of course, I'd never tell him that to his face... 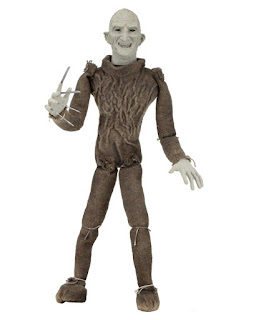 Dream Warriors is regarded by fans as the best Elm Street sequel and to some, best movie in the entire series. One of the most memorable scenes is when Freddy turns one of his victims, Phillip, into a human puppet. But even creepier than that was the little Freddy puppet that attacks poor Phil. Check it:

No better way to celebrate the 30th anniversary of Dream Warriors than to cuddle up with this creepy Freddy Puppet. Actually a puppet was slated to come out years ago but never showed up shelves:

But considering the sculpt on this beauty, I'd say it's worth the wait. All 18 inches of him. For Freddy collectors, this has been a long time coming and very welcome addition to any Fred-Heads collection. Myself included.

Once again, thanks to the great folks at ToyArk.com for their amazing coverage as well as allowing me to use their photos. Please visit their site for the BEST toy coverage out there!

As for me, I gotta figure out what I can sell to make room for 40 Toxies and 20 Hordaks...