on December 05, 2016
So the other day I vended at the famous Village Gate Toy Show. I've written about the toy show plenty of times and, it's something I always look forward to. But, to give you the rundown of my experiences would really be redundant. Sitting behind a table haggling over the price of a loose Two-Face figure isn't really exciting. The excitement comes from what I brought home. And I can tell you that, despite not wanting to spend any money on anything extra, I still managed to bring home some goodies. 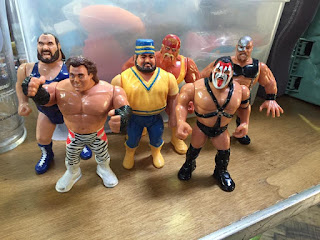 WWF Hasbro Figures! Awwww yeah! As much as I'm looking to get rid of stuff, I'll always make room on my shelves for these guys. I traded some old ECW figures for these to a couple local indie wrestlers, one of whom was former WWE star and current indie favorite, Colin Delaney. There's not a lot of action figures I go after to keep anymore but these guys are one of the very few. How could I not? They're a seminal piece of my childhood and to this day, there's plenty of figures I never got to own. To this day, I'm still hunting down a Nailz figure to stalk my Big BossMan or an IRS to team up with the Million Dollar Man. Yeah, I know those are weird choices but...well...look at me...

Anyway, let's dive in to the figures I did pick up, shall we? 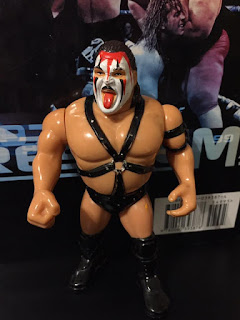 One half of my all time favorite tag team, Demolition, who would then go on playing The Repo Man, a character who would steal license plates and cookies. I have a Smash on my shelf, but he's beaten to hell and I needed an upgrade. My old Smash had a giant paint smear on his face, a bald spot and an action feature that works halfway. This was an easy pickup. Now Demolition is reunited.

Except Crush. No Crush. Ever. 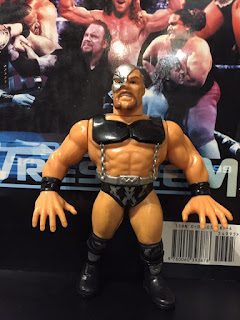 Warlord had a weird history. First he was just a big, muscular guy with painted face who formed a tag team with fellow big man The Barbarian to form a Road Warriors ripoff called The Powers of Pain. Then he became what you see above: A space aged Phantom of the Opera with a giant metal staff with a "W". I always dug this look. He looked like he would've been in a sequel to Trancers or something weird from Full Moon. Warlord didn't have a lot of skill in the ring but he had a good look. This figure shows what he was known for. Body-slamming. When you have arms the size of New Jersey, you can pretty much ONLY be known for body-slamming other giant, sweaty men. 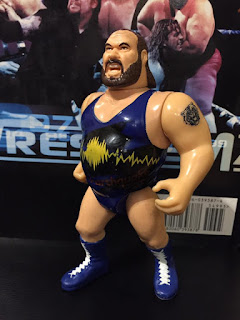 If you never saw Earthquake, the late great John Tenta, you missed out. He was a very agile and gifted athlete for his size and weight. He'd make his debut by sitting on the Ultimate Warrior's back in a sit-up contest between Warrior and Dino Bravo. I don't make this crap up. He went on the feud with Warrior, Jake Roberts, Hulk Hogan and actually retired Andre The Giant. This figure represents his time with his partner from the Natural Disasters, Typhoon, Typhoon. This is one of three WWF Hasbro figures that had movable legs, (also including Typhoon and Bam Bam Bigelow, who would share this mold) so he could preform his "Aftershock" finisher where he sits on his opponents chest. Because if you're like 200 pounds and a 500 pound beast sits on you, you're not getting up. 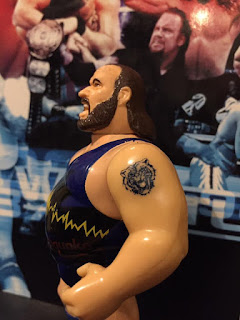 Another cool aspect of this figure was the fact that he had Tenta's tattoo of a tiger, which was taken from the college he played football at. A lot of wrestlers had tattoos but not a lot of Hasbro figures featured them. For example, Repo Man had his arm tattoo but Demolition Smash didn't. Which, doesn't make much sense. But giving it to Quake? Just adds something extra special to an already special figure. 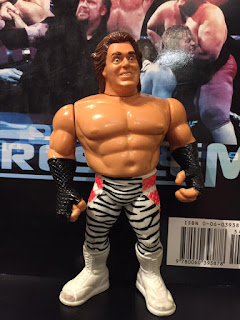 This guy. Boy oh boy. Essentially, Brutus made a career off making goofy, puffy faces, cutting peoples hair and kissing Hulk Hogan's red and yellow butt. He wasn't very talented but he came in at a time when you needed a character. Since he had a lot of charisma, he was portrayed as a goofy barber with bulging eyes. He won a tag title with Greg Valentine but that was it. But he got this cool figure! His first figure was pretty stupid but this was more playable.

That's as nice as I can possibly get. I'm just not a fan. But it is a cool looking figure... 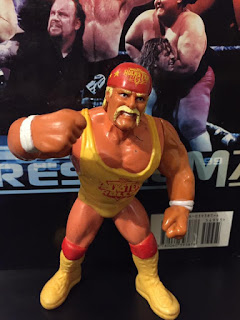 Funny enough, I picked up both other Hogan and Brutus figures at the beginning of the flea market season this year. See? 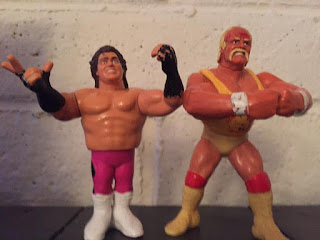 This was Hogan's third Hasbro figure and may be my favorite. I love the second, "bear hug" Hogan but after getting my hands on it, this may be my new favorite Hogan figure. It just shows him at his best and has a much more playable feature. Pull Hulkster's arm back and he clobbers ya! Neat! Plus, his shirt and bandana are spot on. Great figure! He also seems to be the smaller version of that awesome giant talking Hulk Hogan produced a year before.


But my true favorite of the lot is someone Hogan used to battle against and the one that rounds out the group... 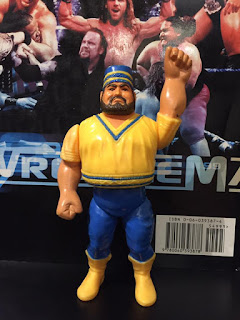 Akeem was formerly the One Man Gang, a giant mountain of a man with a mowhawk and could downright destroy anyone. But Vince decided to make him a black man trapped in a fat white man's body. Oh and he'd dance like a fool. Which I may or may not have imitated a LOT as a kid. And unlike Dusty Rhodes, who was the American Dream, Akeem was the African Dream! Because...I got nothing...I still don't know why. But...uh...man could he cut a rug...

It was a goofy, and some would argue super racist, gimmick but he made it work. He was put into a tag team with Big Bossman as the Twin Towers who really got over big by making Hulk Hogan and Randy Savage's life miserable. Akeem left shortly after Wrestlemania 6 but thankfully we were blessed with this awesome figure. He was in the first Hasbro wave and was given a belly bouncing  feature, that was also given to Andre The Giant. He got a great pose, a great sculpt, and a feature that fits him perfectly. It's one of my favorite figures in the entire line. It's not hard to see why.

So did I make out great or what? In the words of Macho Man Randy Savage...OOOOOOOOH YEAH!


On top of all these, I was also gifted this sweet WWF birthday hat! BONUS! 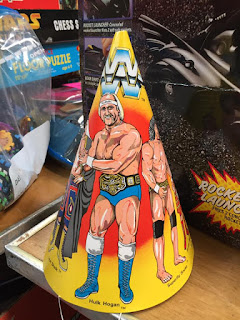 I may have danced like Akeem after receiving this hat. Accurate portrayal, shown here: