Christmas 1991: The Year of the Tournament Table

on December 22, 2016
While 1990 was certainly the year of my favorite Christmas present ever, The Ninja Turtles Sewer playset, the year after wasn't too shabby either. 1991 was probably one of the finest years of my childhood due to so much fun stuff going on. I had a great year all around and whenever I think about events of that year, I get that big ol' grin on my face. Whether I was watching wrestling on a Saturday morning, chowing down on Cheetos Paws on Friday night while watching TGIF, or just another weekday watching GI Joe and Wake Rattle and Roll before school. Huh. I kinda sound like a bum. But uh...when you're a kid, you're kind of allowed to. Besides, between playing with action figures, NES, riding bikes and playing street hockey with my friends, watching cartoons and ABC sitcoms and wrestling, I didn't have time for much else. But that all changed Christmas morning 1991...

The big item I wanted more than anything was the Fisher Price 3-In-1 Tournament Table. Check this bad mama jamma out. You get one gigantic table and it turns into a virtual rec center by providing you the tools of the trade for the following games:

Besides, that commercial sold you on it. Look at these two ragamuffins go at it:

That catchphrase was all it took for me to want this. The commercial was a stroke of genius. Me and my buddies were all getting older and at times, action figures weren't cutting it alone. So what are we to do to pass the time? Smoke weed? Nah. Underground fight club? Well, maybe, especially the way my friends played NES. Perform open heart surgery? Tempting.

This all inclusive set made me the king of the block. Well, until Anthony next door got a freakin' above ground pool. But for that 6 month period, my basement was the destination for a fun afternoon. If you had the patience to go through 40 rounds of pool, you were more than welcome to test your luck. 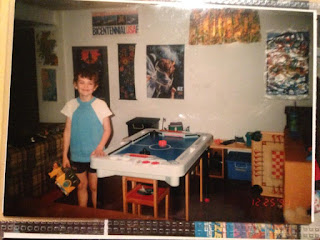 Hey, that's me! In very short shorts and a very irregular shirt! But check out that sweet game room of mine. An ET and Home Alone poster, some toys, a Carrom board(which resulted in a lot of arguments) made it the perfect place to have friends over and entertain. Heck, it even has cupholders! CUPHOLDERS! A major convenience on a hot summer day. Besides, leaving a can of Pepsi anywhere else would be a big no-no. Also, it was around this time, my friends and I started using curse words after losing. As you can imagine, expecting a bunch of 8-10 year olds to play nice after winning, wasn't the wisest ideas.

My friends and I had seen enough tv shows and movies featuring smokey bars and billiard rooms to really wanna get the mood down. I remember my friend Danny Thrift(longtime readers certainly recall his rather memorable exploits) even designed a weird lampshade/overhanging light fixture we could put over it. Thankfully, considering we had building skills, it never got passed the drawing phase.My family had a pool table before this but it got old broken so before I was gifted this, I already had the game down and was able to rack up quite a few victories in my column. Many a time, kids left crying with their tail in between their legs and their pride heavily damaged. I'd often give out numbers to my victims and only refer to them as those numbers. Ask Victim #4529 how he's doing...

Sigh...ok,, ok. I sucked at everything. But being the social butterfly I was, I just enjoyed the company and the time I spent with my friends.

As I got older, the table became a non factor in my life. I used it more to draw, customize figures and write. Around age 14, it was just collecting dust in storage. Sadly, the glory days of the Tournament Table were just a memory. We donated it to the local Goodwill, so I'm sure it found a good home and found kids to love it just as much(and hopefully even more) than me. But for those few years, it was my go-to fun center.

That brings us to the year 2016. 25 years later and it's memories of joy still stick around. I haven't seen this beauty in some time and I'm sure if I do see it again, I'll turn into that 8 year old and just flip out with excitement. 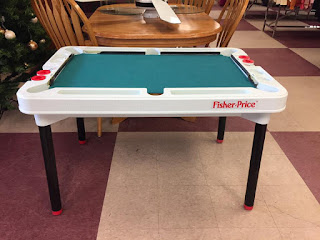 The other day I went to the local thrift store and this was the first sight I saw as I opened the door. I rushed over and my eyes got big and suddenly, I was in my basement, beating all my friends in hockey.

Yup. There it is. Just as I remember it on Christmas morning. Seems to be absolutely 100% complete too! Everything is here, including the pool cue chalk! 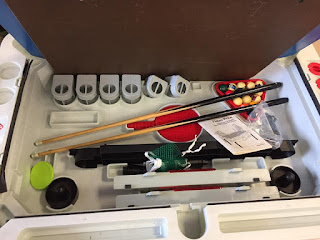 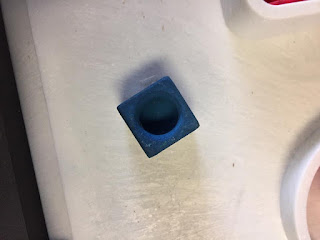 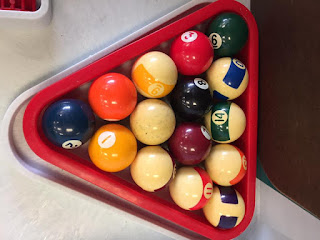 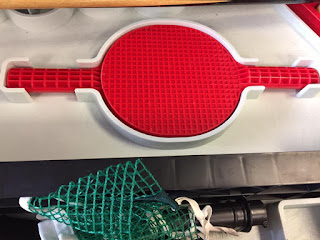 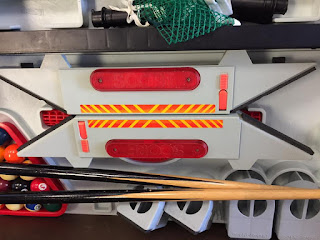 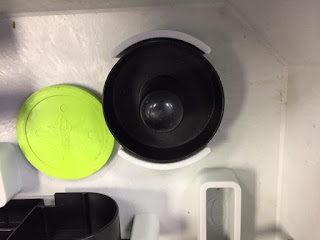 Now since I was doing nothing but taking photos of this, flipping over all the game boards and almost at the verge of happy tears, I pretty much had to hurry it up and skedaddle. So, I bid it farewell but for that one moment, it was bliss. Absolute childlike bliss. 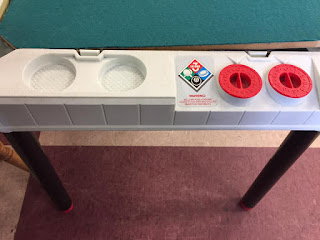 Oh and before you ask...YES...I was ready to go buy a Pepsi and start playing pool just to "test it out". ;)