The Sewer Playset and Other Cool Artifacts From Christmas 1990!

on December 08, 2016
The world was a different place in 1990. No internet, no cell phones, and most importantly, no Real Housewives of Beverly Hills. No sir, none of that nonsense flew back then. It was all basic stuff. We kept it as simple as humanly possible. We liked it that way. And while a lot of things did stay the same, a lot has changed.

Now, when you're a kid, Christmas takes on different meaning than it does as an adult. Its just presents, presents, presents. Thankfully, you grow out of that phase. Now it's more family, food and then presents. But remember when you were a kid, wanting that one thing and then waking up on Christmas morning to finding you had received it? It was usually the last present you were to open. Parents know what's up. They wanted us to be as excited as humanly possible seeing our holy grail after opening books and socks and crap.

And 1990, I had a huge holy grail. It was the undisputed chanmpion of playsets...THE TEENAGE MUTANT NINJA TURTLES SEWER PLAYSET. 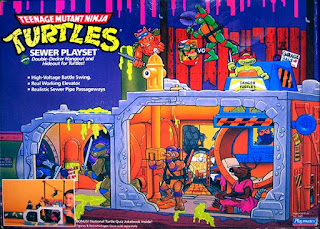 Thar she blows. A giant plastic heaven only suited for the Turtles. The box alone is enough to drive a kid into the famous temper tantrum mode. If there was ever a reason to make your family look bad in public, this was it. And it had a legendary commercial that most kids will no doubt remember:

Between the spiked ball coming down the sewer pipes, the mutagen ooze through the manhole, the elevator and the periscope, how could any young child NOT want this? For me, it was either go big or go home. This was it for me. It's all I wanted. No silver or bronze, this was end all be all. 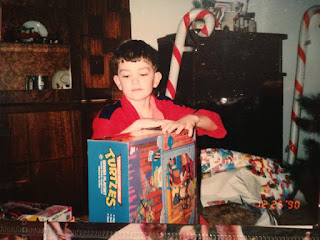 And I got it. It was heavenly. The photo shows my annoyance because my mom insisted on taking a bunch of photos of me staring at the box multiple times. I love you mom, but come on! LET ME PLAY WITH THIS!

Playsets were always the game changer. They separated the men from the boys. Anyone could get a vehicle or a deluxe action figure with a jet pack or whatever, but these major playsets? You were the king. No one could touch you. I was the only kid in my social circles with this and quite frankly, I knew the power I held. Yes, kids would come over to play with THE PLAYSET but that's the only ego rush I needed as a kid. I was needy. 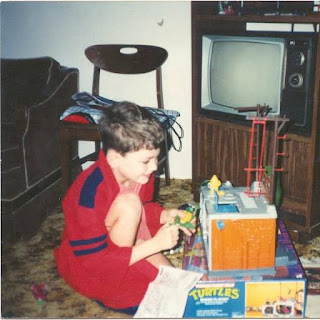 The playset itself was amazingly playable. It not also worked the Turtles but other toy lines as well. X-Men, Batman, GI Joe, whatever. If I needed a city as a backdrop for a battle, this was the go-to. The Real Ghostbusters firehouse was great and all but this had a lot more activities.

I was in heaven. I was so excited, that I immediately put it together after breakfast. I even grabbed all my Turtles and some others to join in the fun. It was so amazing. I couldn't believe it. I had it. It was right in front of me. No one could take this moment from me. And to this day, it's still my favorite childhood Christmas present.

But uh...just for fun...let's take a gander at all the other artifacts from that time in these pictures, shall we? 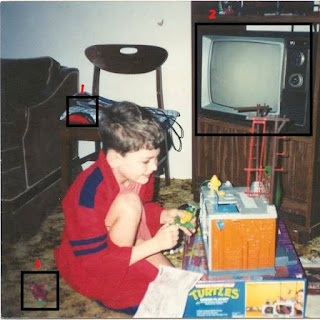 1,) The Nintendo Power Pad: This really only served one purpose. Running and jumping while Track Meet. More of the predecessor to Dance Dance Revolution. It got old after a while and quite frankly, I used it more of a cover when I'd make a fort out of pillows and my couch.


2.) The Old TV: Ahhhh the hours I spent playing NES on that TV. It was our only tv downstairs, and got no cable channels. If you got the local NBC affiliate in black and white, you'd be very lucky. It was severely outdated by 1990 but it was your best friend on rainy days.


3.) Kenner Joker figure: As I said, I used this almost immediately for all toy lines. And when Batman needed to chase the Joker, this was the place to do it. It looks like I left Batman out of the fun this day, unless he's hiding in the sewer itself, waiting for his clowny goofball arch nemesis. 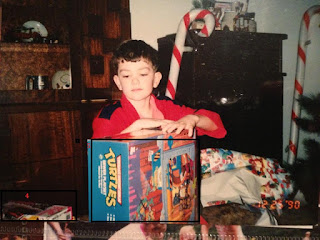 4.) NKOTB Jordan Knight Doll: YES! I was a HUGE NKOTB fan and apparently in my moms mind, that meant I had to have a Jordan doll to display on my shelf or something. I may have even asked for it, knowing how weird I was back in those days. I could sit here and deny it all I want, but why bother? It was a huge part of my life. New Kids made some awesome music and I had no shame in loving them now or now. That packaging was AMAZING by the way...

5.) The Sewer Box: Check out that sweet cardboard goodness. I just can't take my eyes off it. I wish I would've kept it. My mom almost always immediately threw out the boxes as she thought they took up space. Fair enough. But if I was smart, I should've turned it into a poster. I had done that with other stuff later, so why I didn't do it then and there, is beyond me. But it's a real beauty. Those Turtle boxes always provided some sweet-ass artwork.Even if you weren't a fan of the toys, you could still admire the artwork. It was that great.

So, that's the most interesting aspects of those photos. Sadly, no other photos from this Christmas. I'd love to see what else I received. But when you get a FREAKING SEWER PLAYSET and a New Kids on the Block doll...what else do you really need?