A Cornucopia of My Pet Monster!

on December 16, 2016
I think as adults, it's common for us to buy ourselves a present every Christmas season. To some degree, I kinda think it's a little excessive when it's a holiday where a big tradition is to...ya know...give gifts. However, if I'm allowed to just buy myself one present for myself shouldn't be just one item that I've wanted all year? Or maybe...30 years?

For those unaware, My Pet Monster is one of the greatest slices of 80s nostalgia. It was a big deal if you owned one. It was like having an invisible friend. You know those My Buddy or Kid Sister dolls from that time? Those big, goofy dolls with soulless eyes and serial killer smiles? Yeah, I mean I guess they were ok in a mini-Charles Manson kinda way, but if you really wanted the coolest of the cool, you had THIS. I was 3 or 4 when it came out so my mom put the constant kibosh on owning it but as I got older, I saw the other kids who had one have the times of their lives. It just had that undeniable effect on a child. Why have a big goofy doll that looked like a little brother on an ABC sitcom when you can have an honest to goodness monster?!?!?!

I've always loved the aspect of this toy but I only admired him from afar. Much like Madballs and The Power Glove, I was meant to just live vicariously through others. Oh, if only you knew how many years and hours I spent just merely thinking about owning this. But never did I honestly believe it would be possible. Have you ever seen the completed eBay listings? The doll itself goes for at least 60-75 without the handcuffs. Those handcuffs alone go for at least 70-100. I just can't see dropping that much on a lot, let alone a toy. But, I always figured if I was to find one, it would be at the thrift store or at the McDonald House Sale (my friend Jes found one complete, in flawless shape, for 4 bucks!). But eBay? Nope. Then, it hit me. There's other avenues. Craigslist, LetItGo, Mercari. So about two weeks ago, I hit up all of them to look. Couldn't hurt, right? Welp, Craigslist was a big fat NOPE. Mercari? Forget it. But LetGo? Oooooh...

I found a listing in Californ-eye-aye. It was risky. The listing showed a photo of the Monster WITH Cuffs! It also said "Price: Negotiable". Hmmm...Ok. Let's play with this, shall we? I was willing to set a $50 limit. But I didn't think that would be possible. So I sent the seller a message and what I received shocked the heck outta me.

It was an easy "HELL YES". I didn't wanna get too excited. I didn't want the seller to start looking at listings and raise the price. 10 bucks for this is not something I can let slip out of my fingers. So, we agreed. I don't need to tell you that after getting the tracking number, I couldn't think of anything other than my new friend. Everything was blue and purple in my mind. Ya know that feeling of waiting for a mail-away GI Joe? Yeah. That feeling. The one-track-mind feeling of "it's almost here, it's almost here". The agonizing wait dragged on and on. I was ready to go insane. 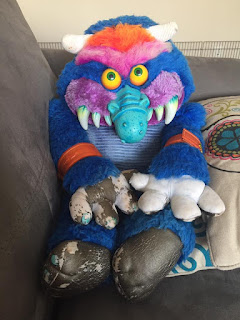 He's here. Holy crap. He's actually in my possession. I can't believe this. After 30 years, he's mine! 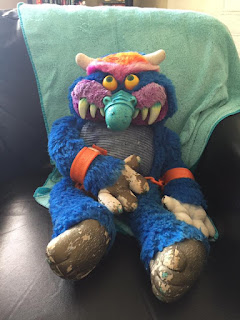 Live and in living color. Well...somewhat. He's faded to hell but ya know what? I couldn't be happier. The effect of opening the box and seeing him stare at me with those blood shot eyes and innocent snarl is enough for me to forget about all of my problems. He needs a little tender loving care and some appreciation and for that he came to the right place. I know a lot of people who have big bright colored dolls but this guy? I feel like if I had one as a kid, this is what he'd look like. I most likely would've hung out in my treehouse in the back yard with him, probably sharing a glass of lemonade and then after playing outside for hours, we'd go inside and watch WWF Superstars and eat grilled cheese. I always hear people who have had this guy that they literally took him everywhere. I can see why! I kinda just wanna lay in bed with him on a sick day and watch movies. He's essentially your best friend if your best friend was a giant pillow. 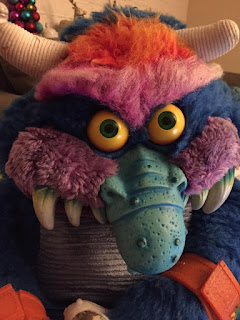 Or he's someone you can do everyday activities with. Such as... 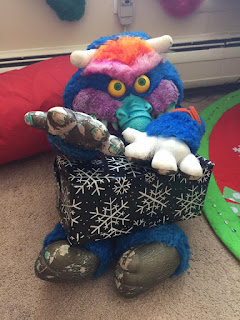 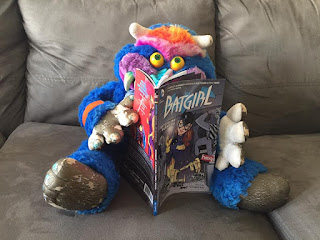 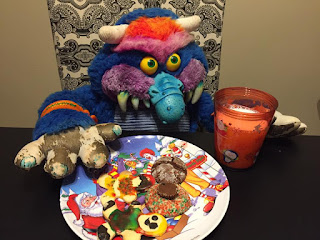 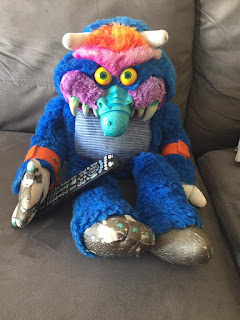 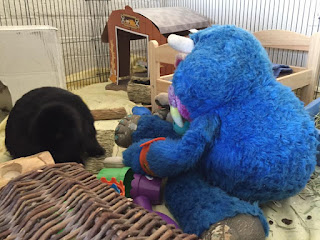 I love people and all. You could definitely call me a social butterfly and a people person. but I'm pretty sure after this purchase, I no longer need friends. He wants to be loved. I'll gladly take him in.

Oh yeah, and check it out. The handcuffs even fit my arms! I know what I'm wearing in my next work id photo! 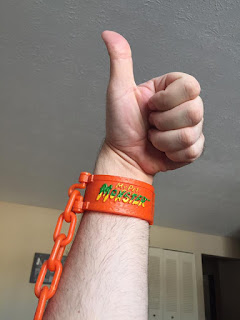 Due to my obsession with this guy over the years, I've picked up a few items for my collection. A pin from London 1888 that I wear every day. A lot of great MPM pins have been released but this is hands down (or claws down?) my favorite, and in my opinion, the best! 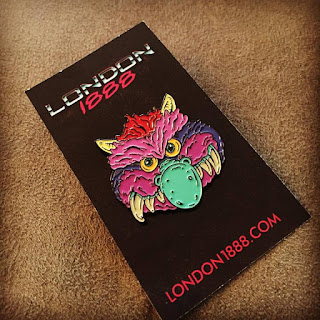 I also own the amazing live action movie gifted to me by the fantastic Brian of It's Trash Culture. If you've never seen it, it's certainly the sight to see. It serves as the wild origin of Monster and even stars one of my favorite voice actresses, Alyson Court, in a very early role. It's never been released on DVD or blu-ray which stinks because it really is a great-terrible movie that is so over the top insane. If you've never seen the movie, fix that now:


On top of these, my fiancee actually made me a Monster birthday cake this year: 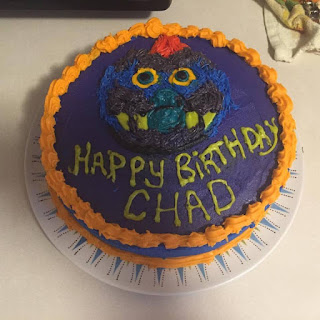 Monster has become a huge part of 1980's culture. Artists continually pay homage to the purple and blue beast in t-shirts, hoodies, pins, and more. But the one thing that always boggles my mind is the fact that he hasn't been re-released. Sure, he had a re-release in 2001 and 2008, but they looked more cartoony and kid friendly. But a re-release of the original mod in the same size and colors. Maybe even a a dvd release of the live action movie? That would be awesome. I'm sure a whole new generation would embrace My Pet Monster all over again.

Until that moment comes, I'll be hanging out, watching tv with My Pet Monster... 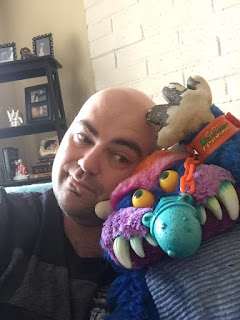