- March 17, 2015
As I discussed in my previous entry, I really want to cover everything I can about Monster Mania but to do it in one post would really be too much. So I wanted to break it down over the span of two or three entries. Yesterday, I discussed the stuff I bought and left with, today I discuss the moments I walked away with.

The big draw to the general public for Monster Mania is meeting the celebrities. For some, this is the only reason to make the trek to Cherry Hill. I mean, who wouldn't want to head back to work on Monday with a story about hanging out with the T-1000 from Terminator 2? Sure, it would be awesome! Thankfully, Monster Mania loaded up some good names that both me and my best friend Andrew could agree on that would be great to meet. First name on our list? Tobin Bell aka Jigsaw from the Saw series.

Now, Andrew is not the biggest horror movie fan, but Saw was always one of the exceptions to that. And why not? Tobin played Jigsaw so darn well that made you buy your ticket just by saying "I want to play a game". So we knew we had to meet him. His line, as expected, was sizable. 2 hours. Yup. It was pretty bad, but he and I were pros. We've stood in line for longer than this. And honestly, by the time we got to Tobin, he was worth the wait. No doubt. He asked Andrew and I about ourselves and wanted to get to know us. Especially as to why we're both so tall and not related. Andrew purchased an autograph for $40 and I decided to pay for our photo op at $20. The price wasn't so unreasonable but I really hate paying for photo ops. But, it was either that or nothing.

That said, as much as I love Saw, I love Seinfeld even more. So, for those who don't know, Tobin played a grumpy record store owner at the legendary NYC record store "Bleaker Bobs". My idea for a photo was to get Tobin to hold a Sergio Mendes record(he got into an argument with Kramer and Newman over their poor taste in records). Well, Tobin was so blown away and appreciated the thought, he offered to sign the record at absolutely no charge! That was a generous surprise! In fact, I'd dare say I'm the only person on the planet with a Sergio Mendes record signed by Tobin with the inscription "Bleaker Bob"! And if you've never seen Jigsaw with a huge smile, brace yourself! 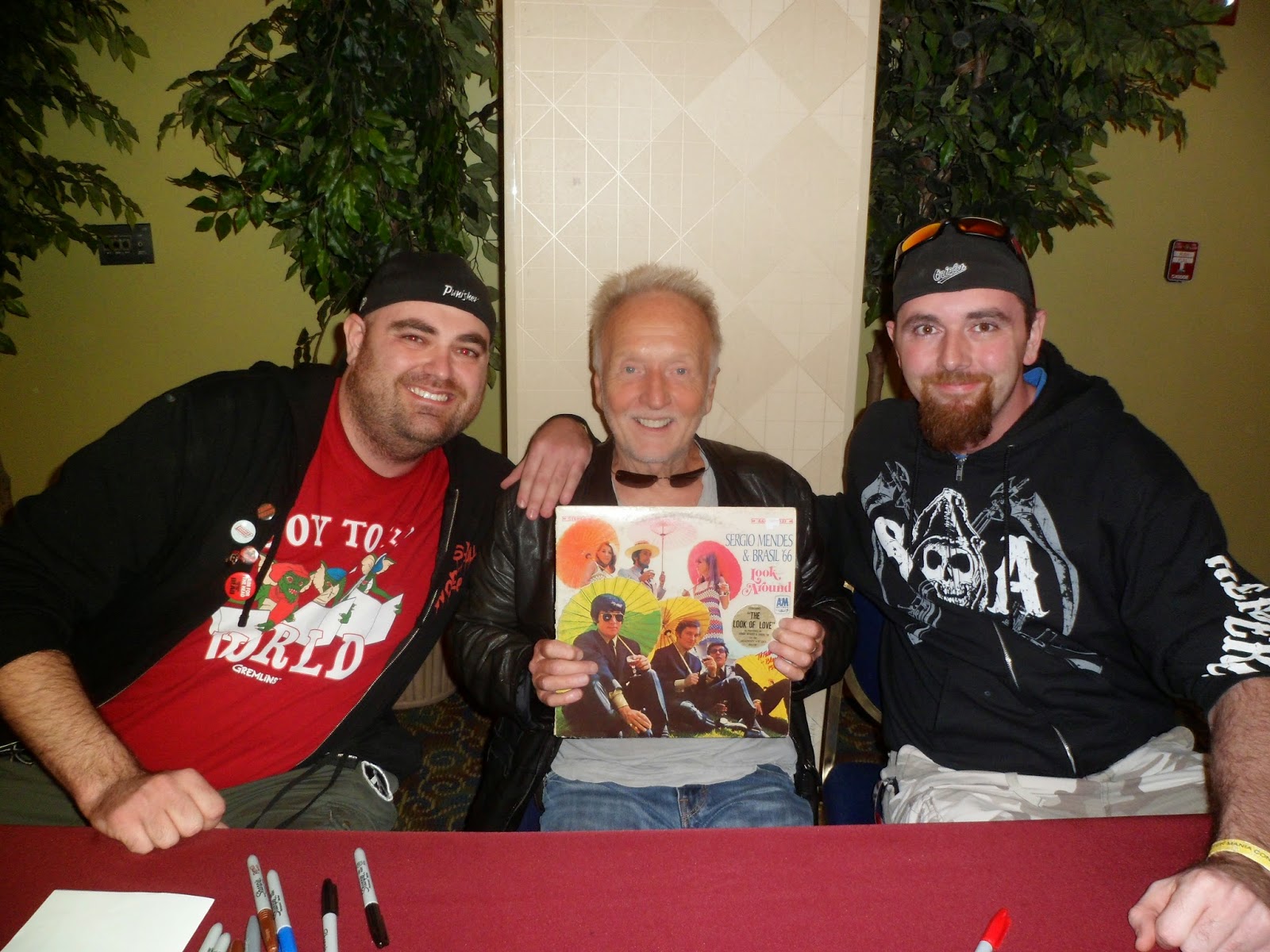 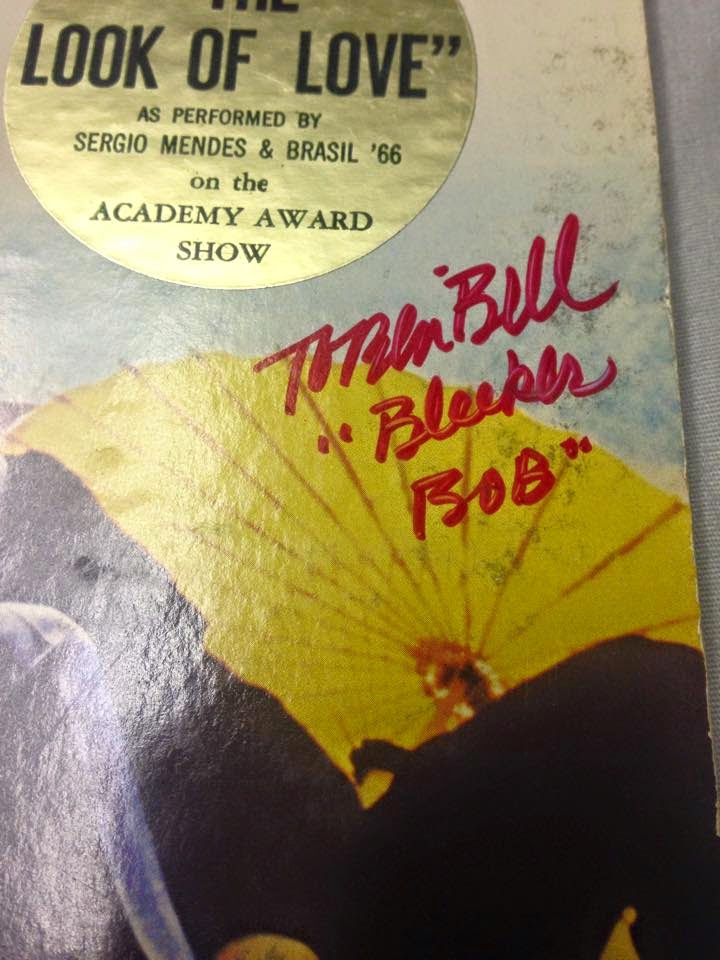 If you ever get the chance to meet Tobin, please do so. You won't regret it!!!!

Andrew and I both have been huge fans of Terminator 2 since it first hit theaters in the summer of 1991. It was a natural for kids who loved action movies, Arnold and crazy special effects. And of course, you can't have a good hero without a great villain. Robert Patrick made that happen. His cold, blank stare, his frightening run, charisma. He was perfect. So despite $40 for a photo or autograph, we knew we had to meet him. He also asked if we were brothers due to our size. Andrew and Robert discussed motorcycles and Sons of Anarchy. For our photo, I had Andrew pull up a photo of Eddie Furlong to recreate Robert's appearance in Waynes World. He gave us a great T-1000 face too! 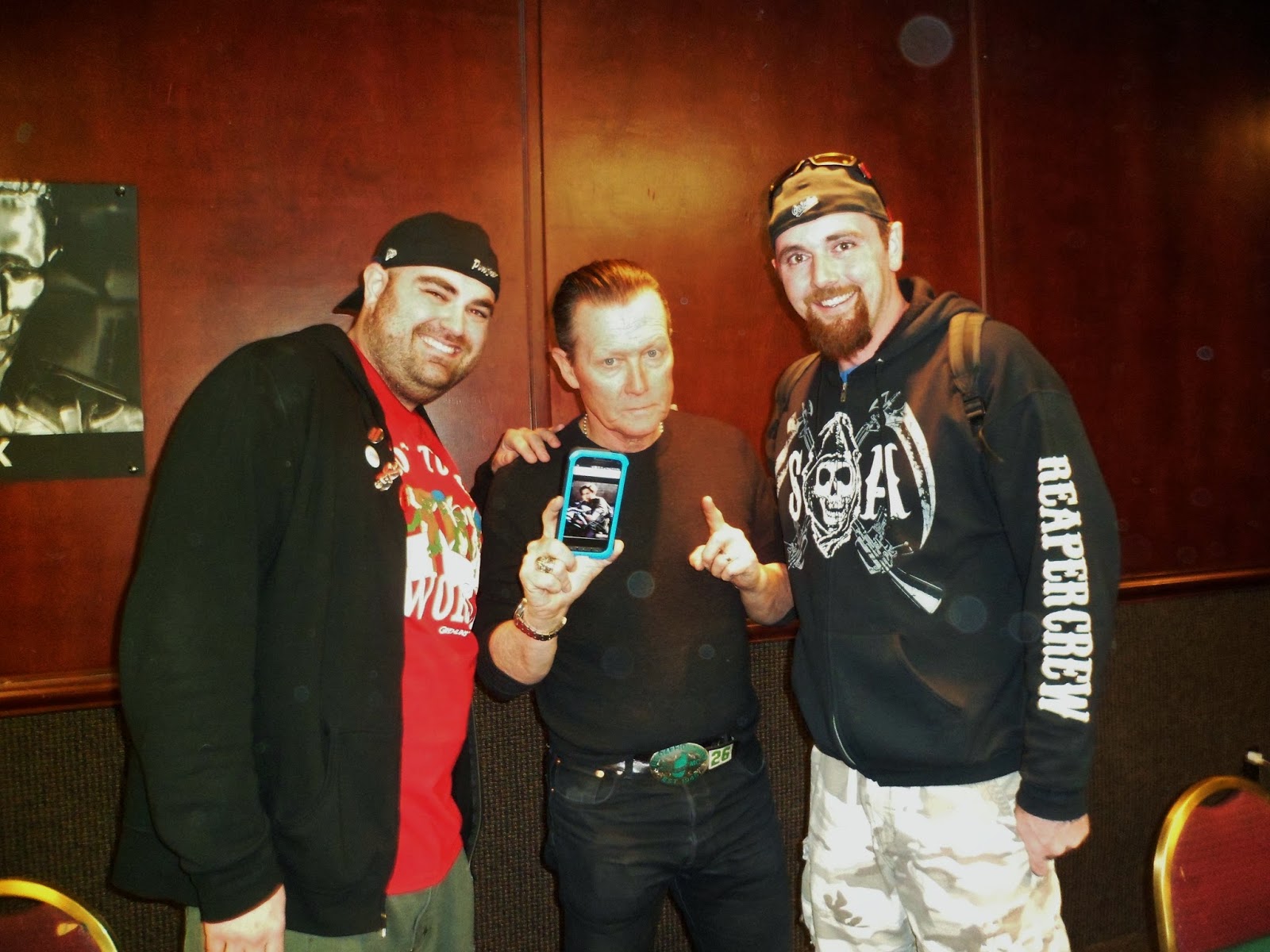 Jennifer from the first Back to the Future. I had originally planned on getting her but expected high prices. Thankfully, she wasn't as expensive as I had hoped. Only $10 for a photo op. That's hard to turn down. I always preferred her over Elizabeth Shue, so it was a no brainer. She was very gracious with all her fans and very appreciative. And she looked pretty darn good too! 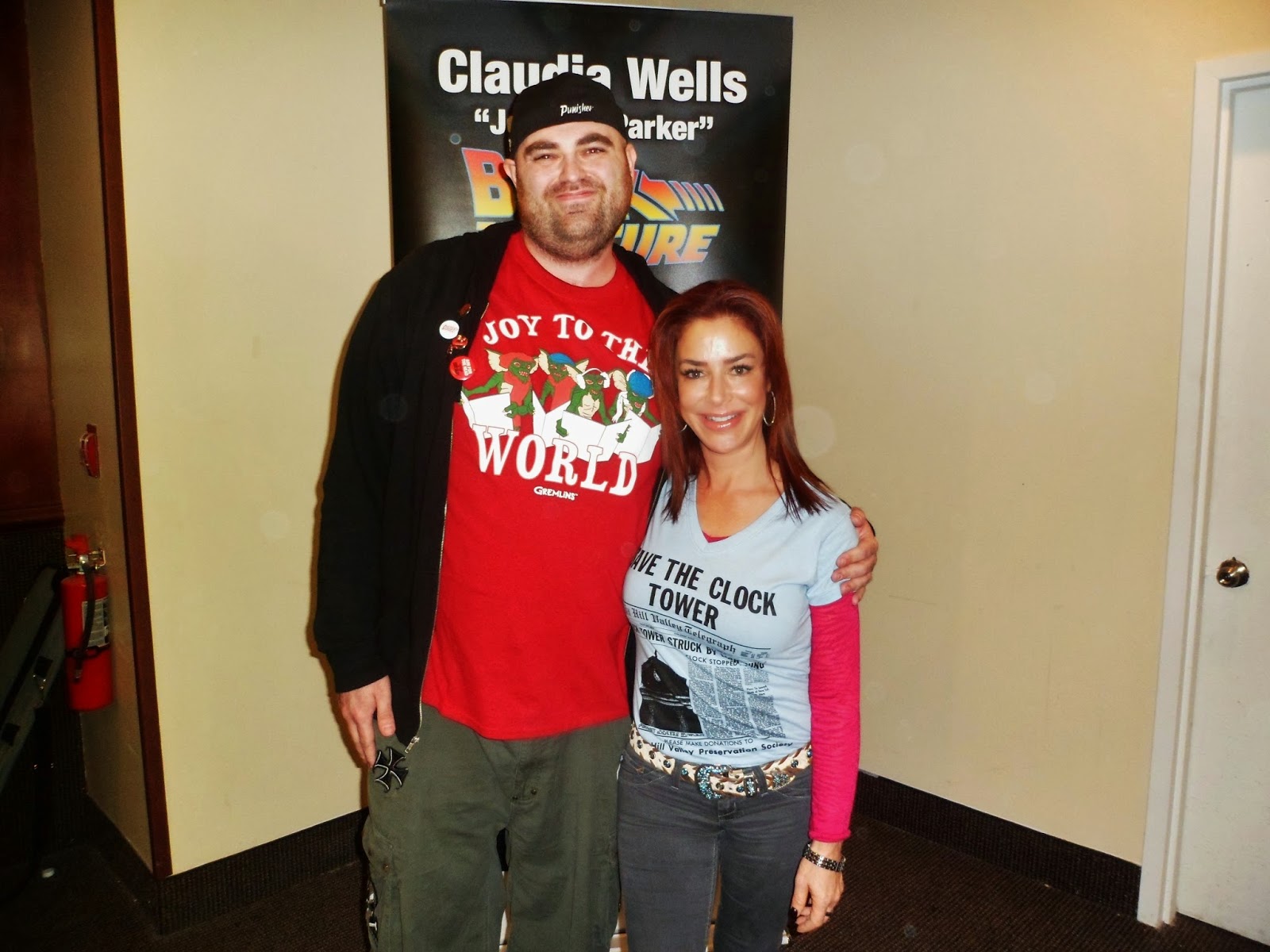 An easy name for me. As a huge fan of Gremlins, Fast Times at Ridgemont High, and Clerks The Animated Series, I knew I had to get a photo. But much like Claudia, I had fears of high pricing. I didn't want an autograph, just a photo. So for $20, I was more than happy to splurge. He seemed friendly with everyone and shook everyones hand who met him. With his big trademark smile, he thanked everyone for coming out. I told him I loved Clerks and he let out a big laugh. And of course, much like Tobin, I had to have a Seinfeld photo with him as the Close Talker, which may be my new favorite celebrity photo! He was more than willing to pose with me like this. He was great! Credit to Chris Beaumont for letting me cut in line! Haha. 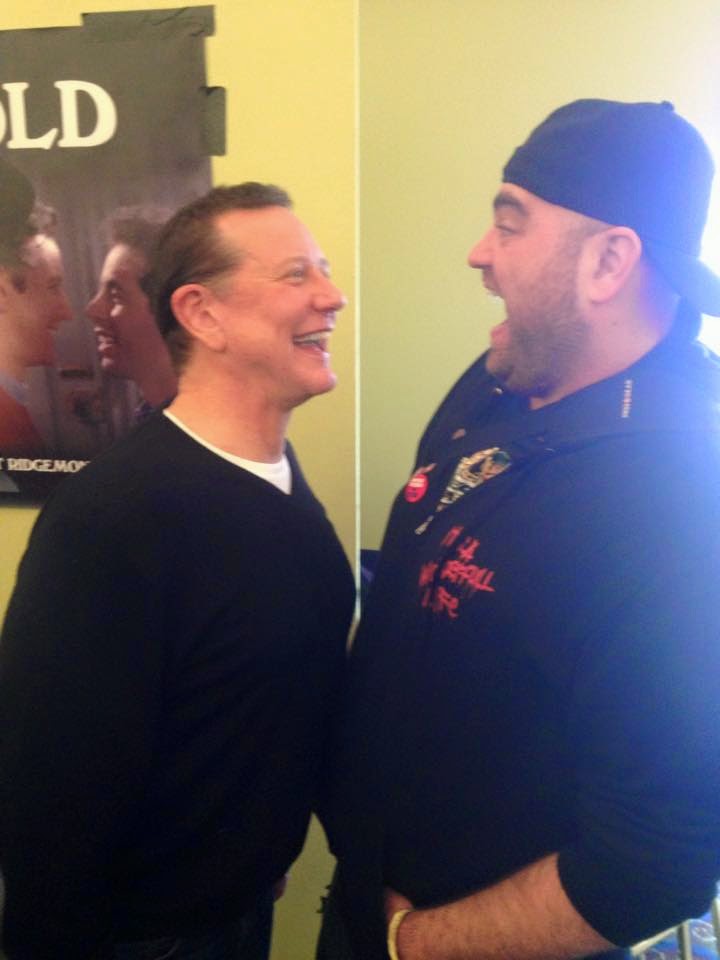 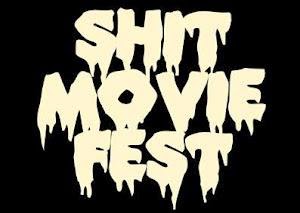 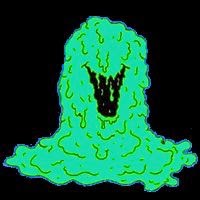 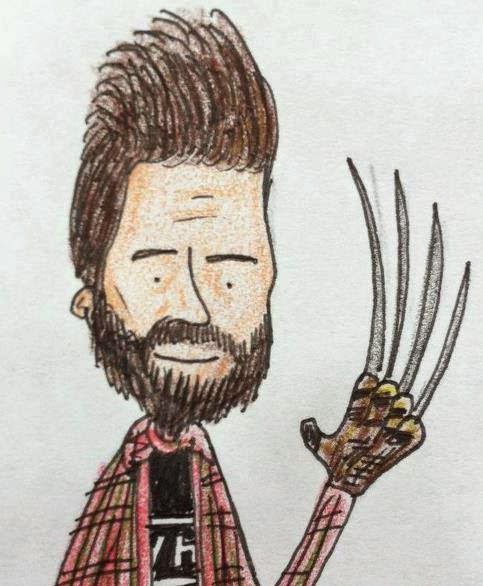 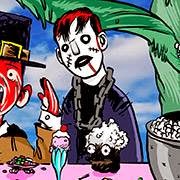 While celebrities are a huge favorite at Monster Mania, meeting up with friends is my personal favorite part. And over the last year or two, I've been making friends and chatting it up with fellow bloggers thanks to my blog and wackiness on Twitter. Four of those, have been Thomas Bryce of ShitMovieFest, Jay of TheSexyArmpit, Johnny of FreddyInSpace and Matt of DinoDrac. Now, I've met Thomas and Johnny, but I've never met Jay or Matt despite being huge fan of both blogs for sometime now and had many fun conversations with. I ran into Thomas Bryce and the awesome Jason of IconVsIcon, who was unloading the SMF-mobile and gave me the most delicious pretzel ever from PhillyPretzels. I didn't get a lot of time With Thomas Bryce during the weekend, but the time I did get, was highly entertaining and great as always.

But, as I was on my way out for a cigar, I literally bumped right into both Jay and Matt(As well as the mysterious Mrs. X, the charming girlfriend of Matt) who were checking in with Johnny, We exchanged pleasantries and immediately started chatting about the show. It was a real pleasure to meet them especially since I had a fear of making an ass out of myself with a first impression. Thankfully, that wasn't the case. Later that night, I'd find the crew at the bar eating dinner. I stopped by and Matt showed off his toy find of the weekend(I'll let him cover that if he chooses to do a report).

Johnny and I would meet up and chat a little here and there and caught up. It's always a pleasure to chat with him about movies, the goingsons of the horror world and me stealing cookies from the buffet. And to be able to meet his great family, was also fun.


Another group of fellas I wanted to meet was from the page HorrorSexy, that I contribute from time to time. I was recruited by Shawn Savage and thankfully I was given a great opportunity. Meeting DocTerror himself Jimmy Harris and fellow contributor Chris Beaumont was great, as we've had many conversations and contributions together, but never had the opportunity to meet. So Friday afternoon, that changed with this epic photo of the three of us. Horror? Perhaps, but definitely sexy! 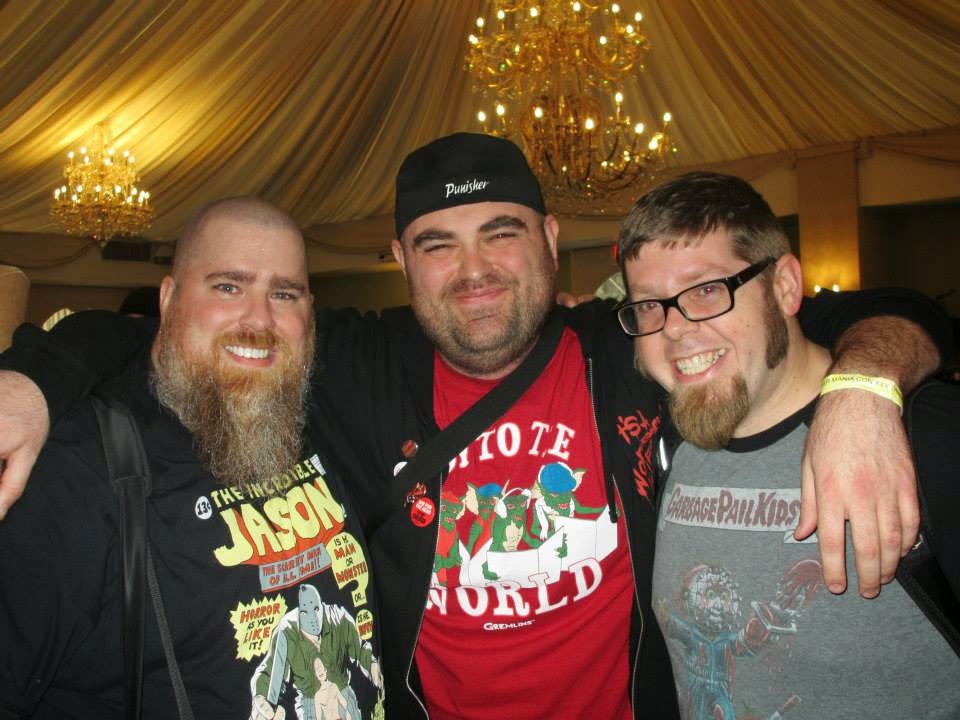 Monster Mania has given me the opportunity to make a lot of friends. Some of my closest friends attend the show and I owe the convention for introducing me to them. Sadly, I only get to see them at the show. So rooming with them was a no brainer. I got to spend a good two days with the best people in the world, people who I can tell anything, share my deepest fears and secrets. I couldn't ask for a better group of friends in my life. I'm glad I got to spend my weekend with them.

While the convention aspect is somewhat of a dead notion to me, the social aspect is still very much alive. I'm so glad I was able to get away from my worries for a nice weekend to hang with the people I love and meet people I admire. I couldn't have asked for a better weekend. Thanks for all those who made me enjoy myself and contributed to some great memories.

Next entry, I'll put my final thoughts on this show as a whole. It was a great time, but that's not to say it didn't have it's issues.