I've been on a massive American Gladiators kick lately thanks to the 24 hour AG channel on PlutoTV. In fact, I think I'm even more in love with this show NOW than I was in 1992. I've really been sent down some deep rabbit holes in regards to our heroes and naturally that's taken me on eBay journeys as well. 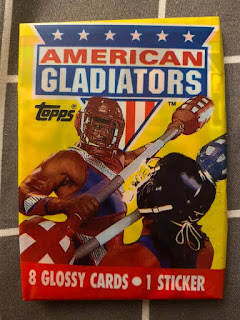 Thankfully Gladiators merch is rather cheap, especially the action figures. Those things are super easy to hunt down. I mean, heck I was able to find one for .50 at a flea market just recently. Other merchandise for the brave and beefy heroes of the Gladiator Arena became run the gamut from lunchboxes to candy bars to video games and of course the old reliable of any quasi-popular franchises from the dawn of time...TOPPS TRADING CARDS! I was recently gifted a pack of these beauties from my friend Brandon aka BORT and decided I needed to share the wealth with you guys. So come take a journey back in time and check out these amazing pieces of 90's beefcakery! 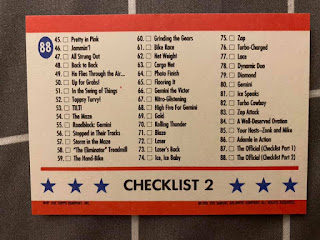 First thing's first: every card set back then came with the dreaded checklist. Maybe I shouldn't be so harsh, I'm sure for those who loved being organized were a fan of these, but to me they were just a giant waste of space. I could be getting a Malibu rookie card but instead I'm looking at all the cards I DON'T have! 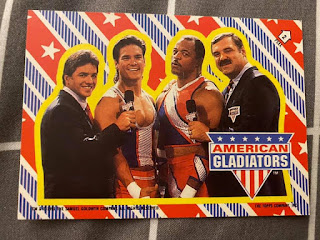 Now onto the fun stuff. First off, the sticker. Essentially the trading card equivalent to a happy meal toy. If you ask me, these were the real stars of the sets. Usually my dresser and bedframe were covered in these for ages. I'm talking Batman, Alf, Growing Pains,Max Headroom, they were all there. This sticker features commentators Mike Adamle and Larry THE ZONK Csonka flanked by iconic Gladiators Gemini and I believe Turbo. I'll be honest, I kinda suck with a lot of the names sometimes. Either way, we're off to the races and roaring for a real banger of a pack. Can't wait to see what else is in here! 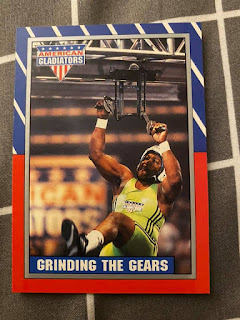 First card up features a brave Gladiator engaged in a weird...well, I'll be honest, I still don't know what that is. It's one of those weird bicycle/zipline type deals that I'm sure you had to be in super amazing shape back in the day to even look at. My arms are tired just thinking of lifting a ciabatta roll at Wegmans, let alone one of these things. 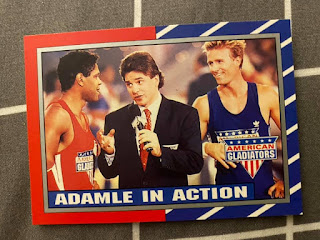 An Adamle double feature! Pretty rare to get a card and sticker in the same pack featuring the same character but the former WWE Raw General Manager seems to be one of the few who can pull that miracle off. Here we see him interviewing two seemingly nameless contestants about taking on their opponents. One of the fun aspects of this show was the fact that they treated it like legit sports as well as add a dash of pro wrestling. So they'd add former athletes to call the action and to be honest, Mike Adamle was perfect for it. He had the personality, he had the knowledge, and he had the gift of gab. Plus look at that head of hair! 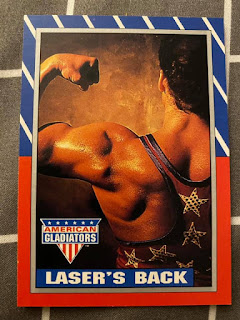 From a sweet head of hair to an amazing shot of Laser's Back. I don't exactly know who approved this particular shot but hey, I've got to imagine some kid somewhere at some point in time used it as motivation to become as big as a house, so who am I to judge, really? Gotta think positively and this show was all about positivity...while wearing spandex and maintaining a sweet mullet. 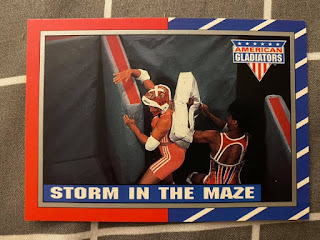 Storm was one of the most powerful women on the show and here we see her using all her might to take on what I imagine was a school teacher or firefighter. If you thought the men hit hard in this show, you should see what the women were capable of. They didn't play around and put the fear of anything holy in anyone who came in their way. Considering you didn't see a lot of positive athletic female role models at the time on tv, this was a pretty good place to showcase them. And you don't get much more powerful, strong and sexy than Miss Storm here. 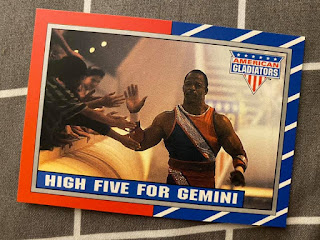 Feeling the love from the fans inside the Arena, Gemini is PUMPED and ready to go into battle. Gemini was always a pretty affable and easily relatable guy. I feel like he'd be the kinda guy down the street I could rely on to help me out when I'm in a bind. He just always looked to be in a great mood. Maybe it's the mustache? Either way, Gemini, who was one of the original Gladiators in the show, was top tier and stuck around for a while. To this day, he remains a fan favorite. 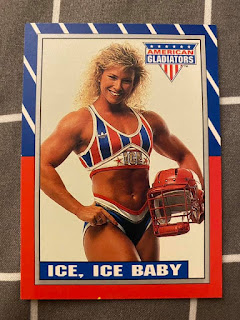 Well, it was the early 90s and thanks to Vanilla Ice, if you had anything to do with ice whatsoever, you were gonna be slapped with an "Ice Ice Baby" joke. Ice, much like Storm, was one of the best of the best and despite the Robert Van Winkle reference, was no joke. Of course, if she were a joke, I can guarantee you it wouldn't have anything to do with doing the running man while rocking a rattail and wearing a giant foil onesie. 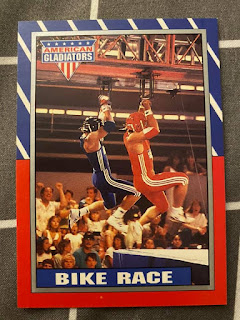 I guess we're ending the pack how we began. With the bike/zipline thing. Man, I must have a bad memory because I don't remember these bike things being as popular in real life at that point. But hey, like I said, I barely have the body that can walk around the block. I'm sure if I had the muscles the size of mountains, I could probably have taken on the bike race. Maybe in my next life. Heck, maybe in my next life I'll be reincarnated as a Gladiator!

These cards are a real delight and pretty easy to come by. You can find them on eBay for cheap and most likely even a full set for under 15 bucks. Which, if it gets me that Malibu or another Mike Adamle card, I'm totally plunking down the cash for it!