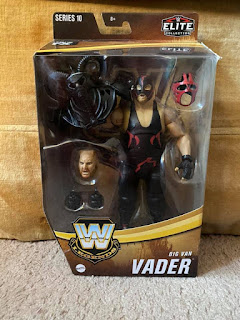 Big Van Vader, know to be one of the greatest "big men" in pro wrestling history, has had many action figures through the years so it's kinda hard to give collectors a new reason to buy another one. We've already seen two previous figures of the legend(mainly in his well known WCW and WWF gear) released in the Legends and Elite lines but Mattel decided to give us something relatively new: 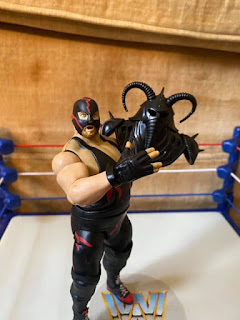 This figure, recently released in the most recent Legends series, is based more on his New Japan days and his WCW debut in 1990. The appeal of this figure, in my opinion, is that we here have never gotten a figure of him in this particular getup. Like...ever! I don't exactly know the reason for not seeing this version of Vader but I am glad we're finally getting it in this form. I don't think it would've been done justice had it been released during the Classic Superstars/RA(Ruthless Aggression) era in the mid to late 2000s. The prolly would've just reused that horrific "fat person" mold and thrown red and black paint in random directions. 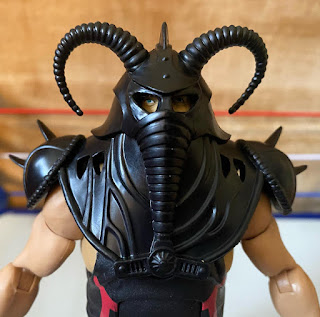 Most notably, this Vader comes equipped with his famous "Mastodon" helmet which he wore many times to the ring in NJPW and WCW but never in WWF. For fans who remember Vader at the height of his heel monster run before Hogan got his hands on him in 1995, this is a perfect accessory. It was a big part in Vader's presentation at the time and helped make him seem larger than life. Not that he particularly need the help in that department given he was 6'6 , 400 pounds and flew around the ring like a giant freaking spider monkey with ADHD. 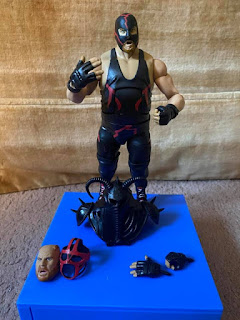 Another great aspect about this figure is the fact that we get alternate hands and heads. Vader was never been released with his famous V hand sign that he would often flash to remind us that it is indeed Vader Time, so thankfully this figure fixed that. Also if you're not too keen on keeping his original fully masked version, you can pop it off and replace it with his more familiar weirdo spider mask! Now, personally, I love both looks but I kinda prefer the spider-mask personally. Wait...Is that the right term? Spider-Mask? Or is that going to get me a letter from a Marvel lawyer? Oh well, let's go with it until I get a cease and desist from Mickey and his boys at Disney. 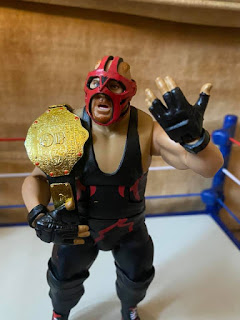 I can't recommend this figure enough. It's a great representation of Vader in his prime and just looks so tremendous on the shelf next to other legends he's taken on in the past. If I had one problem, it's the fact that he didn't come with a WCW title belt but for continuity sake (he didn't win it until later anyway but that didn't stop me from including it in my photos here), I get it. Respect for sticking to the right timeline, Mattel. Out of all the great Vader figures we've gotten in the Elite style, this may be may personal favorite. The color scheme on his gear really looks great and stands out. And of course the helmet looks terrific, whether he's wearing it or holding it.  You can grab this great Legends Series 10 Big Van Vader in Targets near you NOW! He just started hitting stores and has quickly become a very popular figure amongst collectors!

Just keep him away from your Gorilla Monsoon or Paul Orndorff figures... 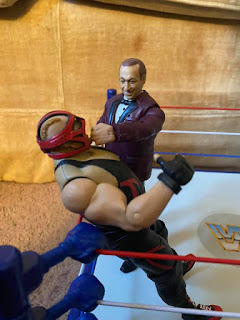