Well, it happened again. I have a license to go down eBay rabbit holes and I may need that license revoked. Although, I may have to wait til the next three shipments I'm expecting. Much like the majority of my friends, I've been hooked on eBay and other sites a little more since the whole country has shut down last year. It gets to be a little much at times but it's good for the thrill of the hunt...or thrill of the bid. Screw it, I'm only mortal! I can't turn down a Sid Justice figure for $3.99! Or in today's case, a lot of fun Ghostbusters goodies! 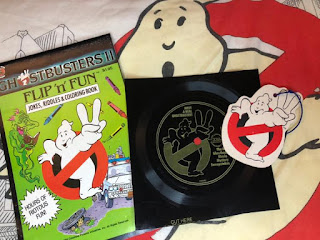 There she be. A bounty of Ghostbusters 2 greatness. If you look at it from a certain POV, you could consider this the ultimate road trip kit! You don't? Well, ok, maybe it's a stretch, but if I'm traveling anywhere, I know for a fact all these items will all untie to make a useful, almost Voltron-like force of entertainment. 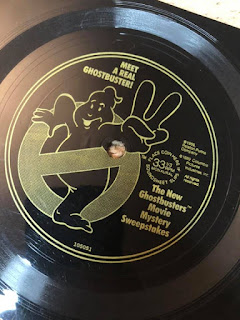 Offered in boxes of Ralston's Ghostbusters cereal, this record would be your ticket to meeting a REAL LIFE GHOSTBUSTER!!!! Yes, the grand prize was a trip to California to meet one of the Ghostbusters! Now, I've never met anyone who's won this contest, but my assumption is, after answering a couple of easy questions as read by Maurice LeMarche, the winners and their families were flown out to California to meet a Ghostbusters cosplayer, not a voice actor on the show or even the main cast of the movies. I could be wrong, and if anyone reading this would like to correct me, please get in contact with me and let me know.

I love records like this. I've often said it's promotional stuff like this that should be archived and remembered and by the amount of people who responded fondly enough to a post on social media, plenty remember it fondly, much like the McDonalds Big Mac Song record!

There were two records with different questions but you can hear this particular record, here: 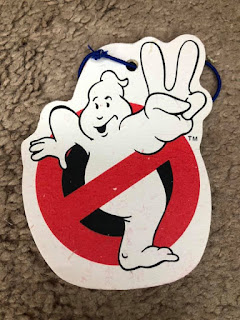 Obviously no longer potent after spending years in an Ecto 1a replica (or at least I hope), but it's still a fun little piece to hang off the rear view mirror. I can't seem to find other samples, but my hopes is this was marshmallow scented. Of course, it was prolly vanilla, which I wouldn't sneeze at either. 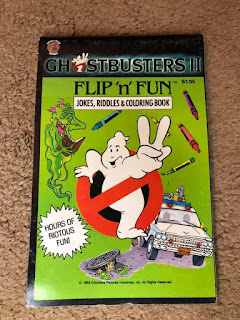 "Flip'n' Fun" sounds rather dangerous to market towards kids if you ask me but hey, if it keeps the little rugrats busy and happy, who am I to judge? This activity book wasn't mint condition when I ordered it, as pages were already filled in, which I expected anyway but it's still a real gas to flip through considering all the goofiness it contains: 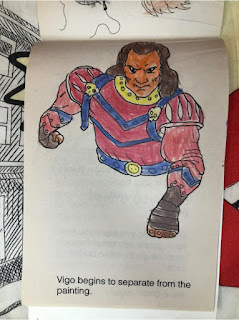 Points for making Vigo look like Gwildor from Masters of the Universe. 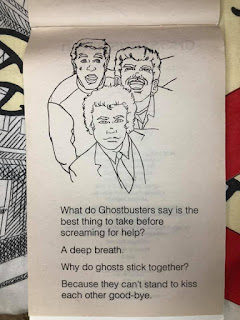 YES! That is supposed to be the Ghostbusters. Maybe the publisher got confused and started drawing Huey Lewis and The News. Either way, that joke slaps and I won't hear otherwise. 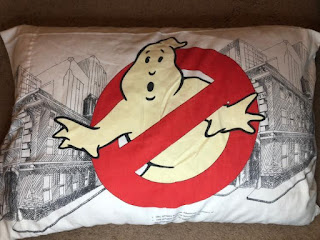 I'm a sucker for vintage pillowcases and for some reason, throughout my life, I've never ever owned a Ghostbusters pillowcase! I always wanted one that just features the No-Ghost logo but this one actually features that gorgeous and memorable logo as well as the legendary Hook and Ladder 8 aka The Firehouse. Now, if you know me, you know I love that Firehouse so when I saw it on this, I knew I had to have it. It's a beautiful image, one that used to glow in the dark and yes I do plan on using this at night much to many eye rolls by my wife. Of course, I had to wash it about 5 times just to be sure but that's to be expected.

Not a bad haul, a fun book, record, air freshener and pillow case should help bring the biggest smile to my face and considering we're months away from the first flea market of the season, I'm sure it won't be my last deep dive on eBay.