The Beginning Of It All: My Obsession With The Super Powers Collection

Much like all great adventures, it all started at my local library on a Friday afternoon in 1996 Yes, yes I'm sure you've heard that before, but this trip is mainly responsible for what I am today. It was just another random trip. My mom was picking up some book for her church group or something and I tagged along. And boy am I glad I did. While my mom searched for her book of choice, I kinda just hung out at the entrance and just tried to look as cool as 1996 would allow me, the biggest nerd in my school, to look and check out whatever books were on the return cart. I thumbed through a bunch of books that meant nothing: a couple of home improvement books, a Stephen King book or two, and then I got to it. A book I had never seen or heard of before: GREENBERG'S GUIDE TO SUPER HERO TOYS. 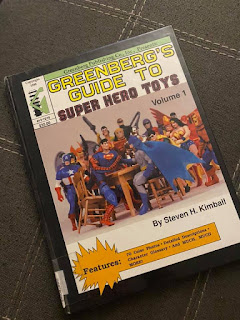 With the cover showing a bunch of superhero toys arm wrestling, I was intrigued. It seemed to be nothing more than an independently written book with no big budget or sponsorship behind it but it was created with LOTS of passion and enthusiasm. Of course, at that time I was hooked on Wizard, Action Figure Toy Review and Tomarts, so my knowledge of toys and comics were pretty deep for a 13 year old. However, the action figures on the cover weren't something I was exactly familiar with. I mean, I had seen the Spider-Man, my friend Stephen still had that Superman, but the rest? Not really ringing a bell. If I had seen them, it had been a very long time. Hmmm...ok, you have my attention, mysterious book. My mom got her books and I was able to check this out as well. Our next stop was the doctors office followed by a trip to McDonalds for a quick bite, it was a busy day but I had something new to dive into and something I couldn't take my eyes off. 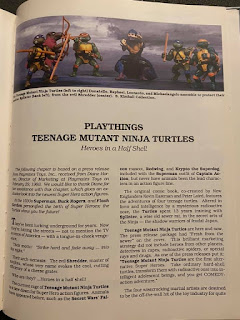 Written by Steven Kimball, this book takes us through the history of comic book and super hero action figures from the first Superman toy to the latest trend in 1988 known as "Teenage Mutant Ninja Turtles" and everything in between. Accompanied by fun photos made using the authors collection, I was given a crash course on Captain Action, Mego, Defenders of The Earth, Secret Wars, they were all here. The more I read, the more I remembered playing with a few Secret Wars figures in my best friend's backyard as kids but the thing that really captured my attention? THE SUPER POWERS COLLECTION!!! 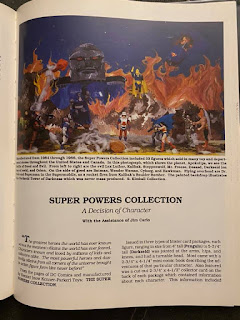 Obviously being a DC Comics fanatic, I was already attracted to this line. Don't get me wrong, I dug the Secret Wars and other figures in the book too, but SP? There was something special here. I was in love with these figures at first sight. They bright, colorful, and each one has an action feature! Batman punches, Wonder Woman blocks things with her bracelets, Green Arrow shoots his arrows, and The Joker hits people with his mallet! Brilliant! The more I read, the more it hit me that I had the Lex Luger figure as a kid and my brother had the Batmobile, but I never knew what line they came from until that day. Amazing! These figures were so fantastic that it made me even look at my own Batman: The Animated Series and X-Men figures and second guess them. I couldn't get over this line and for a while, all I thought of were these figures and how I had to get my hands on them..In the next few months to a year, I would amass quite the collection, including my holy grail, which I hunted down myself through networking with local collectors: THE HALL OF JUSTICE.

Yes, I opened it up and put it together. It was WORTH IT. 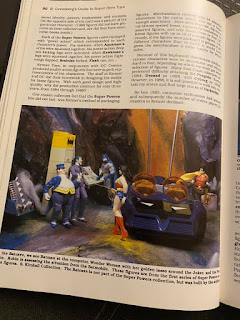 After reading this book, I found my habits in collecting changing and my interests going to mainly everything DC. I'd become addicted to toy and comic news, I'd sit by the internet and print up sections of Jason Geyer's Super Powers Archive to study on my own and use as almost a field guide while out hunting (which you can still read here) . If Greenberg's Guide was my introduction to Super Powers, Jason's site was the Super Powers bible. I even hopped into new things that came out that year like the Total Justice toy line(some say inspired by the Super Powers line but made for the 90s), the new JLA comic, and even started airing old Super Powers cartoons on Cartoon Network and USA. Looks like this book came into my life at the right time. A collective storm of all things DC, comics and toys all in the same year. 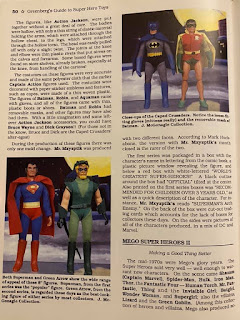 I started to collect more collectible items and showcase my modest collection in more professional ways.  Everything went from a cardboard box and military chest to shelves, cabinets and even putting rare figures on my wall. My time online went from goofy games to networking with other fans, hunting down more figures and trading with people out of state and even making friends with collectible stores across the country. I'd make friends with people I had never met and stay on the phone chatting with the owners and workers for hours about toy news and retro toys. It was great, until the phone bill came. But those calls to stores like Cricket Hill Toys and Action Toys were some serious education I couldn't get by just reading magazines. Now I was in the thick of it. I was part of a fraternity of nerds that would go to any length to get that last piece of their collection. I don't know if that was normal for a 13 year old but considering the things I could've gotten into, not a bad choice. Even better? Later this year, Wizard came out with it's own toy special called "Toyfare" and had a heavy focus on Star Wars and Megos, which thanks to a certain book, I was already aware of!

I'm not into collecting Super Powers as much as I used to, however I still believe it to be the greatest superhero figure line ever. But the habits I picked up and the lessons I learned at that point from other collectors on how to trade, buy and sell, have gotten me to the point I'm at now as a geek and collector. Sometimes, all it takes is one little tiny spark to start a fire and my collecting spirit is not a fire that's died out and probably never will. It's a fun hobby and I can't even imagine where I'd be without that fateful Friday afternoon in 1996.