Something Old, Something New: Visiting The Cartoon Network Hotel

A few weeks ago, I drove down to MD to visit family for the weekend and on the way back home, I decided to stop off in Lancaster, PA for a quick stretch and sight seeing. Growing up, Lancaster was a big summer vacation spot for my family. We'd always stay there for the weekend, stop by the outlets, the local theater and enjoy some local food. It was a great place to visit and stay. One of the things to look forward to was always the hotel we'd ALWAYS stay at: The Continental Inn, a fine little motor inn right in the heart of town. As fun as it was to stay there, it was a wee bit outdated by say 1995. It was more of a motor inn you would've seen in a 1980s John Hughes road trip movie. The carpet, the decor, the game room, the...well...everything. I always remember looking forward to staying there but always curious what would happen if someone were to modernize and update it. Well...I think I got my wish thanks to Cartoon Network: 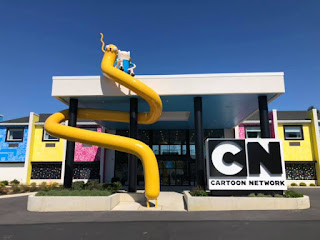 Wow...I guess be careful what you wish for...everything is so bright, modern and...cartoony! 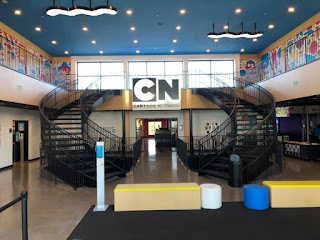 Well, I'll be. The main lobby looks the same for the most part. Mainly because of those two spiral staircases that lead to the second level of the hotel which had just a few rooms. I always assumed those rooms were the special suites since they were on the inside. I was a little too excited and overwhelmed to ask if this was the case for the new hotel, so the mystery will live on. Unless I look at Yelp. But I'm a little too lazy to do so right now. 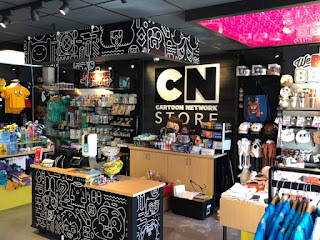 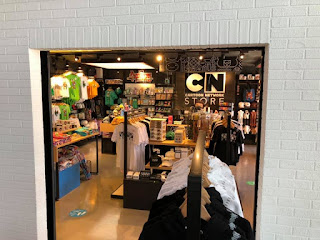 A quick slide to the right inside the main lobby will take you to the mini-store filled to the brim with so much Cartoon Network goodness ranging from Power Puff Girls to Steven Universe and Adventure Time. Much like a gift shop at any over the top sidetrip attraction, this was definitely a highlight for me. I can only imagine being a child and not just staying here at this overwhelming cornucopia of animated bliss but seeing all this amazing stuff. Obviously I had to grab myself a nice souvenir or two, which I'll share at the end, but it wasn't easy to stand here and not want everything. Ya know, because I'm a mature and fiscally responsible adult. 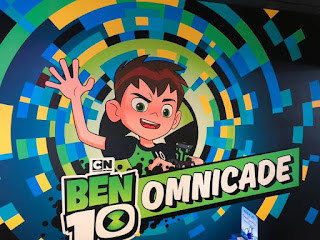 Ok, now the arcade. As I mentioned before, when it was in the hands of the Continental Inn, it was severely outdated. Imagine a bare arcade room with air hockey, Mrs PacMan and a game where you shoot deer and maybe an old soda machine that had about 3 options sold out at all times. Now, it's like walking into a Star Wars set... 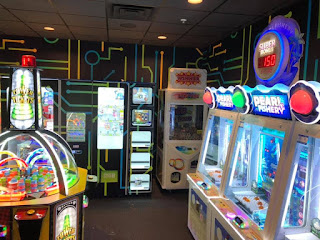 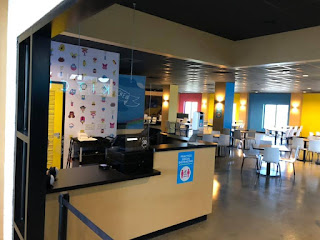 Feeling hungry? No worries, the "Cartoon Network Kitchen" has your back. Sadly, it was roped off due to social distancing but I was able to stop in the little cafe right next door which used to house a small bar mainly used for sports and bad karaoke. 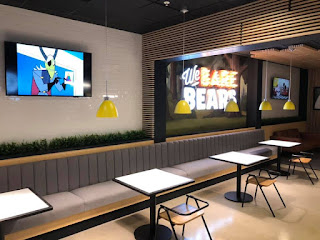 As I got older I spent a few trips to this bar in hopes to escape my crazy family. At the time, I smoked and was allowed to just sit at the bar and talk to the bartender about Van Halen and old WWF. Now, it's manned by a friendly staff who wants to talk cartoons while doling out baked goods and bottled waters while We Bare Bears plays on the big screen. Somehow, I like it better now. 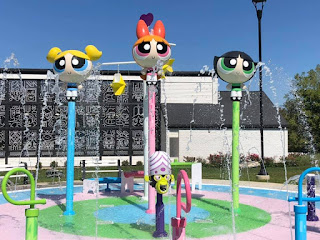 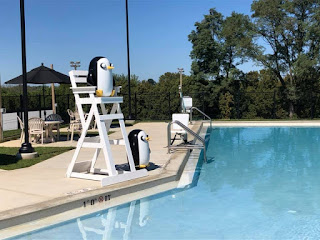 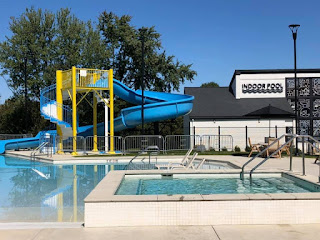 The pool area got a massive upgrade. Gone is the basic volley ball net and swingset, and now stands a giant splashpad featuring the Power Puff Girls and Mojo Jojo while the swimming pool itself is given a better facelift and color scheme and guarded by two Penguins (from Adventure Time?). I feel safer already. Those two look focused on their job more than whatever random teenager used to to stand there and just look bored with life. 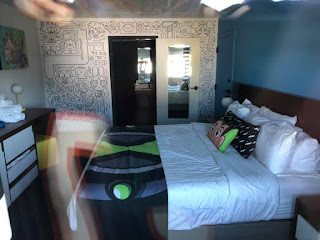 Ok, now the rooms. The most important part. Obviously they wouldn't allow me to just enter a room for the sake of taking photos but I was able to walk by a few empty and recently cleaned rooms to take photos from the outside. It seems all the rooms have been transformed from your basic and bland rooms to splashes of color and all sorts of cartoon characters! The decor alone gets my attention and enough for me to want to stop in next time I'm in town! 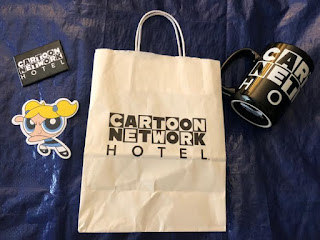 So what did I get at the gift shop? Nothing too exciting: a coffee mug, a Bubbles sticker and a magnet all emblazoned with the hotel's logo. I'm a huge fan of branding and unique items, and I don't know too many people who even know this place existed let alone owning a magnet from it. So that kinda puts me in a class by itself? Nah, prolly not but it is still pretty cool! 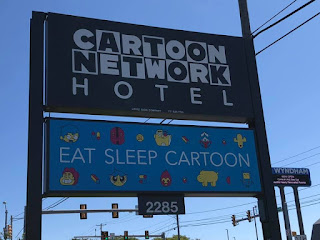 As an attraction, I definitely recommend stopping by a seeing this. I would've loved to have seen it with people there and kids playing. I bet it would be even more fun to be at while it's busy. Maybe next summer? Either way, if you're going through Lancaster, stop by and take a look!
-Chad