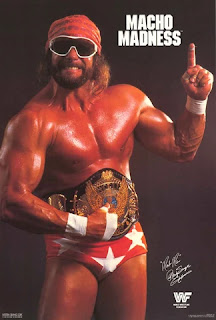 Oooooh yeah, it's the birthday of the late great Macho Man Randy Savage who would've been 68 years old today. Randy, for a lot of us (myself included) was one of the first performers to inspire so many to live their life to the max and influenced so many kids and adults to just be themselves with the volume turned all the way up which is still how I live my life. Probably to my own detriment but hey, why not stand out by being myself? I've always preferred to wear bright loud clothing more than I should but I blame that on growing up in a time when everyone thought it was appropriate to dress like giant walking Macy's Christmas Displays and there was none more colorful and inspiring than Randy. 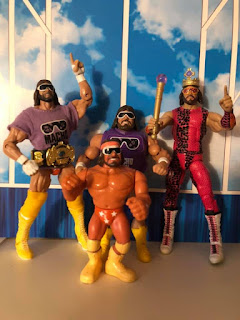 As you'd imagine I've accumulated quite a few pieces of Macho Man memorabilia through the years. Randy's face has literally been on everything you can imagine from cups to coloring books to underwear to toothbrushes and everything in between! Today, I thought it would be fun to check out some of my favorite pieces! 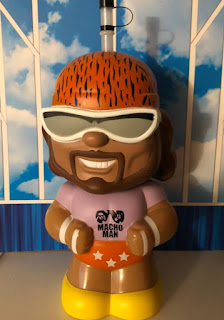 To feel the Macho Madness, keeping cool and hydrated is quite the combination but no one is cooler than Randy Savage so be prepared to have your thirst elbow dropped! This sippy cup, or THIP CUP if you're Dusty Rhodes, was available via WWEShop a few years ago. I had to grab one! I'm a sucker for fun themed cups and even brought this with me on my trip to Summerslam in Brooklyn a few years ago. It's a fun piece that just reminds me of those figural water bottles we had as kids. In fact, looking at it, I'm sure you'd think it was from 1988 or 1990 or something! 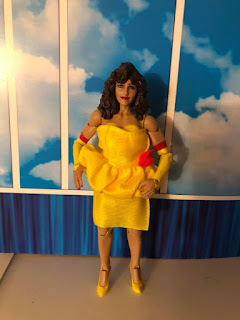 Liz's role in Macho Man's success is just undeniable. They were the perfect package of a great manager who lead her man to gold multiple times and the uncontrollable beast. They were the most And for many, Liz was none more beautiful than she was at Summerslam 1988 where she wore this yellow and red dress (that eventually lost the bottom too). If you're like me, when you think of summers of your youth, you remember just how important getting hyped for Summerslam was and a huge focal point of the early shows was Randy so it's kinda easy to think of him when you think of the summer. Then again, if you were a boy my age, you remember Liz at Summerslam 1988 tearing her skirt off and sauntering around in her red shorts. This figure which was released in Mattel's Summerslam Elite line captures that look which a brand new headsculpt that nails everything about that moment down to a T. Her hair, her outfit, her pose, it's all so perfect. Just like, in the minds of fans growing up watching her, Liz herself. 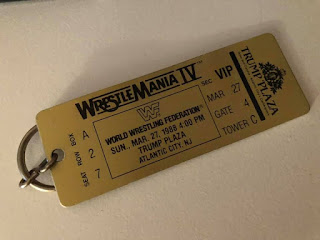 This is a fun piece I've always considered vital to my Macho Man collection. Wrestlemania 4 was the place and Macho Madness was in full swing! This is the event where Randy won his very first world title by defeating about 72 other people in what is the longest and most dull tournament of all time. But this was a nice little trinket that was given to VIP guests at the hotel that weekend. My wildest assumption is it could be used to get into the most crazy parties featuring Outlaw Ron Bass telling stories around a campfire, lifting weights with Hulk Hogan, or shopping for fancy dresses with Liz, but in reality, I'm sure you flashed this and got an extra rum and coke or something. It's still a fancy piece and I really love that I can say that I own something from that legendary night. 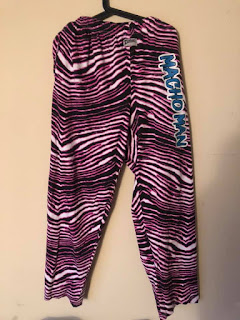 You guys know my deep deep affection for Zubaz so it was the easiest purchase evcer when I found out WWE was selling official Macho Man branded Zubaz! Literally just the words "MACHO MAN" on the left leg but it's still enough to get my attention and money. These are still offered on the WWEShop site along with a Zubaz Macho Man shirt! Now, I love these colors, the pink and black may be reserved for The Hart Foundation but in this case, it works and matches that legendary purple Macho Man shirt! 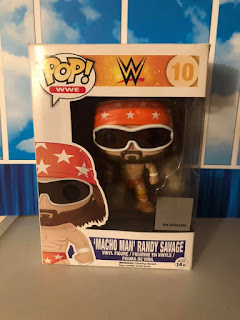 As we all know, you're not someone until you get a Funko Pop! Although Macho Man was a huge name way before this was released, it no doubt helped a new generation latch on to him and perhaps even older fans who had gotten out of wrestling dip their toes back into collecting again. Either way, this Pop has always been a favorite of mine and just looks fantastic. There have been variants since but I just adore the way this first one looks! 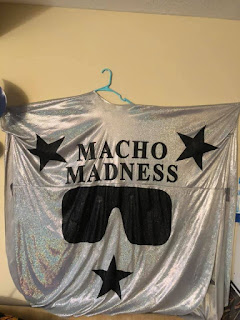 By the company who brought us the iconic Classic Superstars figure line, came a great replica of Randy's Summerslam 1989 robe. Remember how I said when I think of summer, my mind goes to Randy and Summer? Well now with this robe, it can be a Macho Summer all year round! And yes, I have worn this in public to events before and it's quite the conversation starter! I'm just glad this fits someone of my size because there's no way I wasn't going to own it after seeing it in Toys R Us! 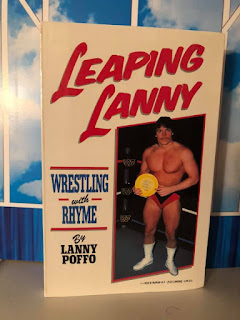 For years, I didn't know that Leaping Lanny aka The Genius was Randy's brother. In fact, the first time someone told me, I couldn't believe it! "But Randy's a good guy and Genius is a bad guy!" was my reaction. Yup, that's the 8 year old mind of a kayfabe loving wrestling fan.

What I also didn't know was that when Lanny came out with a book featuring his fun wrestling themed poems, to help boost sales, he got someone to sign it alongside with it... 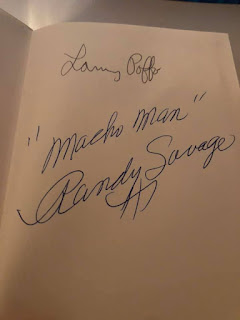 WHOA! Check out that bad boy! A real, clean, full Macho Man signature. Now, I'm fully aware it's not the most desirable item to have Randy's autograph on but considering his signature is hard enough to find, I'll gladly take it. Thanks to my buddy Grant for finding this for me! It's the crown jewel! 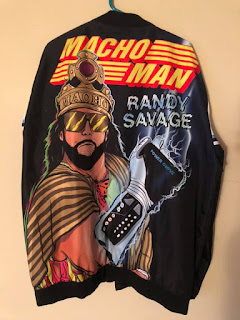 It's almost like Chalkline read my dream journal. A jacket featuring Randy Savage wearing The Power Glove?!?!? There are no words to describe how much joy I feel wearing this. It's incredibly comfy and  very eye catching. I've worn it to a few conventions and events as well as just out and about and people always give me an "ooooooh yeah!" which is always welcomed. How could they not be? 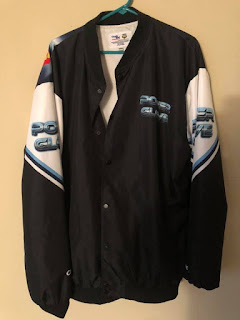 I'm a huge jacket geek but this one just puts me in a whole different place. It legit looks exactly like something I'd wear in 1989 and even resembles the sublimation jackets WWF released back then. I can't recommend a jacket like this enough. Comfy, stylish, and severely Macho! I love it.

Sure I have a lot of great pieces but these are just some of my favorites. And that's saying something considering how wild and colorful Randy was!