Feel The Hellglow of The Undertaker!

In my last entry, I covered the new MOTU: Origins figures and gushed over just how amazing they were but if you noticed, I included a little photo of the amazing WWExMOTU figures hanging out with He-Man and Skeletor simply because I believe the amount of creativity and fun that goes into both lines should be celebrated. While I'm sure I could've saved this for SlamFest in January, I simply couldn't wait to sit back and talk about my current favorite of the bunch: 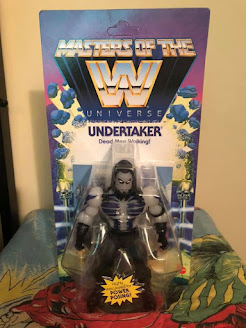 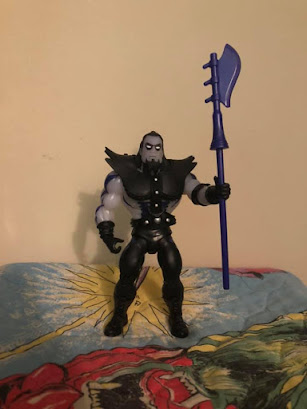 I applaud Mattel for bypassing an Undertaker-Hordak or an Undertaker-Skeletor mashup because that would've been my choice, but going the Scareglow route is one I wouldn't have seen coming and after seeing it with my own eyes, I'm glad they made it happen! 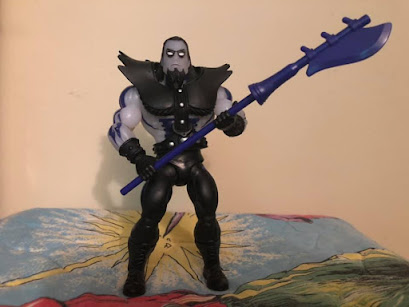 This particular figure showcases the super evil/quasi Satanic priest era of the Undertaker's career where he'd sacrifice people, hang them from cages and shoot lightning at his opponents. Yeah, 1999 was a wild time to be alive. Not my particularly favorite era but seeing as it makes perfect sense to merge him with ScareGlow when he was at his most sinister, I'm all in. 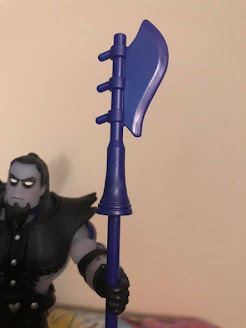 Much like the rest of the line, this figure comes with an accessory or armor that is reminscent of the MOTU figures of old, so naturally an evil zombie skeleton/funeral director has to come with the same exact scythe that the original Scareglow came with. Pretty nice, huh? And it's purple!  Very uplifting! 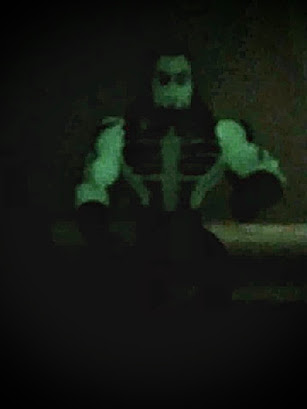 On top of all that, you can't produce a figure that glows in the dark and not expect me to buy 87 of them. Glow in the dark features have always been a big weakness of mine be it stickers, lunchboxes, shirts, and especially action figures! Robocop, Ninja Turtles, anything! It's a gimmick as old as time and this probably won't be the last time I give in to it. Of course, I've never owned the ScareGlow figure proper despite it being my MOTU Holy Grail so until I do I'll gladly own this one. Hopefully when the Origins Scareglow hits stores in October, I can team him and Undertaker up and they can cause so much havoc in the ring!
Another fun aspect of this line is how you can easily transform them from Eternian Power Dudes into normal wrestlers. So if you're one of the millions who always wanted to see Undertaker take on Warrior in a rematch, perhaps Fakor Cena, maybe Macho Man or even...hmmm... 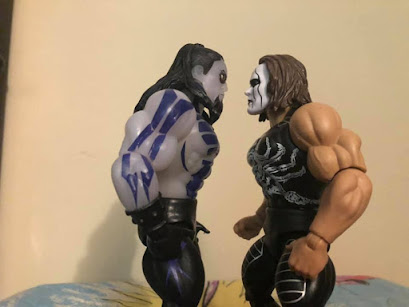 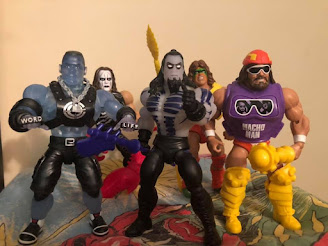 You can currently find this figure in WalMarts everywhere. Hopefully. It's a rad figure, so if you see it, grab it quickly! It may be the coolest and most powerful figure in your collection!
Well...One person may take issue with that statement... 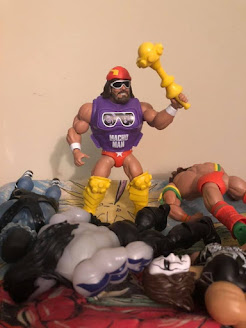 I guess when it comes to the kingdom of the Madness known as Eternia, only one can truly reign supreme!
-Chad
200X He-Man he-man he-man.org Masters of the Universe MOTU MOTU Month ScareGlow Skeletor The Undertaker