Random Things From My Desk!

on May 16, 2020
Even when I was a kid and we had our first computer (a crummy Commodore, still very cool for the time), I always liked having stuff around our desks to keep me occupied. Then again, when you're a child with ADHD and the energy of a racoon who had just dug through the Baskin Robbins dumpster, I guess it kinda makes sense to have as much around you to keep you occupied as possible. Now? Well, I suppose now it's just a nice distraction and an easy motivator. If I'm having a hard time pounding out a project, I can just fiddle with a WWF Hasbro figure or read an old Fangoria to get my mind off whatever is stopping me from writing 32,000 words about No Holds Barred.

Alright, alright, and sometimes it's just because things look cooler on my desk than on a shelf. Admittedly, I don't have to dust an Al Bundy Funko on my desk as much as I would an entire fleet of G.I. Joes. So maybe sheer laziness comes into play as well. 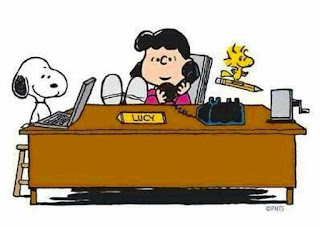 So what goods lays on this messy (and very unorganized) neon green desk o' doom of mine? Well, it's not the most exciting stuff in the world, but if you're like me and need tons of distractions, I'm sure you'll appreciate them... 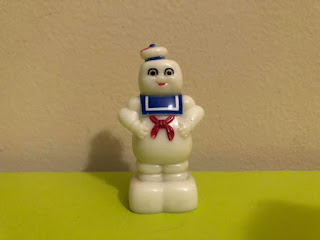 From a late 80s Ghostbusters Happy Meal promotion, this fun little bulbous glob of joy helps me not only come up with new ideas for Ghostbusters material on my computer, but helps keep my pencils nice and sharp and ready to write as well. The big smile on his face looks like he's pretty proud of himself for helping out and playing such a vital part in keeping me creative. If I ever win an award, Stay Puft deserves a thank you shout out. 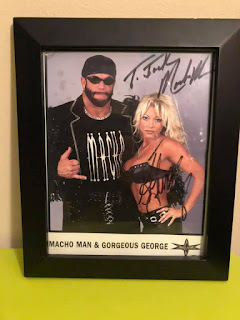 What you're looking at is the prize of my pro wrestling collection. A signed photo of one of my top 3 wrestlers of all time. I actually got this from an old friend years ago at a convention. He had a giant paper bag of old autographs and magazines that were collecting dust and getting damaged in his basement. When I saw it contained photos he had gotten from local autograph appearances, I insisted he take them back. But when I saw a Randy Savage autograph, one I knew I'd never be able to obtain myself...well...suddenly I was ok with taking them. I haven't talked to that friend in years, but I have never forgotten him for being so kind and generous. It's a pretty overwhelming gift to be given but I gladly accepted with a Mega Power handshake...oooooh yeah! 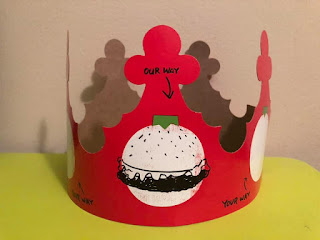 I have a huge habit of collecting special edition Burger King crowns, especially ones from holiday promotions and this is one of my favorites. Last December, BK gave us a "Winter Whopperland" promo, which felt very old school to me and many others who particpated. It was a game where you'd simply pull off a ticket on your drink or fries and it could reveal a prize as small as a free drink or fries to as big as $35,000. Of course, the real ::ahem:: crown jewel, if you couldn't walk away with that big cash prize, were these tasteful crowns to remind you of just how fun the promo was! 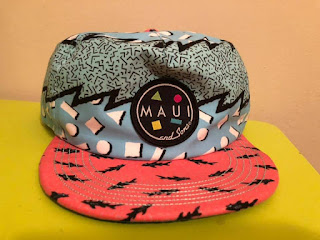 This one is a bit of a cheat since it's on my head as I type this, but I'm still at my desk, so....that counts! 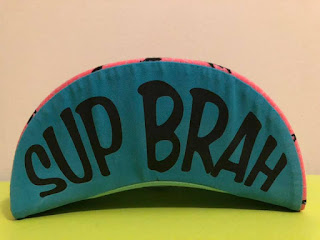 Until last year, I had never heard of Maui and Sons, but apparently their specialty is surf and skate clothing and this particular hat is just one of their many flip caps that have fun, beach-centric, wild designs and a sassy catchphrase underneath the bill. I picked this up relatively cheap during a random trip to TJ Maxx and the answer is YES...I did buy it because it looked like the opening title screen of Saved By The Bell. It brings the summer vibes wherever I go and a perfect addition to my zany summer party dude wear, bro! SURFS UP, DUDE! HANG TEN! 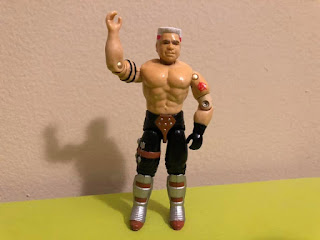 One of the later Dreadknoks from the GI Joe line and when he was introduced, I can't say I was a big fan. Mainly because of how stupid I thought he looked in the cartoon and just how different he seemed from the other Dreadknoks. Now...I appreciate him a lot more. He's one of the bigger GI Joe figure I've owned and definitely stands out. He looks more like a 1980s pro wrestler and kinda like Daniel Roebuck from the movie "Dudes".

Road Pig would be rereleased later in brighter, neon colors, but this one just looks great. I kinda wish I wasn't so against owning him before! 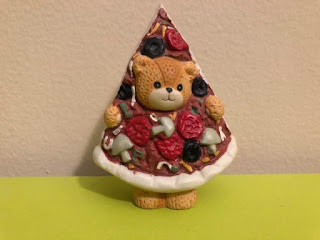 Funny enough, I have no idea of the origins of Pizza Bear! Where he came from, who made him, who owned him before? Search me!

My wife grabbed him for me at one of the famous McDonaldHouse Sale events and apparently when she saw it, she knew she had to grab it for me. I'm sure it was just an after thought of whatever sculptor or designer may have created him but to me it's one of the most unique and most adorable pieces I own. There's just no way i can not have a smile on my face looking at him!

Well, I hope you enjoyed this mini tour of my desk. Maybe I'll rearrange them and add some different items for a fun future entry!