All Hail Serpentor! THIS IS I COMMAND!

on March 22, 2020
This may upset a lot of you, but I wasn't a Cobra Commander fanatic as a kid as much as other GI Joe fans were. He was whiny, incompetent and kind of annoying. I never really bought into the idea that he could lead Cobra and truly defeat the Joes. But then in 1986, I was introduced to the true leader of the famed terrorist organization...I was introduced to...SERPENTOR! 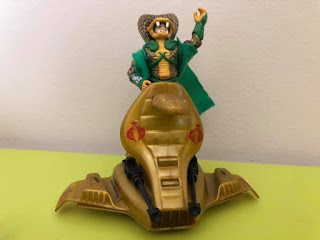 1/2 80's pro wrestler, 1/2 anime villain, all badass, Serpentor was created by the genius of one Dr. Mindbender, who had grown tired of Cobra Commander's nonsense and was determined to create a new leader!  Taking from the inspiration and the DNA of history's greatest warriors: Napoleon, Julius Caesar, Hannibal, and Attila The Hun. Mindbender finally had his leader and Cobra couldn't be stopped. Serpentor was more GOD than he was man. He was huge, intimidating, carried himself like a leader as he barked orders from his massive throne and he even had his own "Air Chariot" fit only for the true king of Cobra! 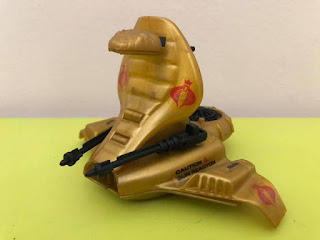 Now, Serpentor was one thing but the Air Chariot was another. As a kid, you don't say no to vehciles that came with figures. Usually, they were just Vipers or troopers. But THIS? A brand new figure in a flying gold snake straight out of a Cannon Movie?! An easy sell. And it's not like anyone else looked right with it, this was made for Serpentor and Serpentor ONLY. Battles in the backyard were never the same again. GI Joe was officially screwed. 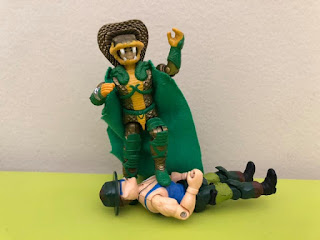 Serpentor was also introduced in the cartoon in the same season as Sgt. Slaughter, so in my mind, I always saw them as arch rivals. It makes sense too. They both look like they'd have the most mighty battle ever and would only leave one man standing. Who would be the winner? My money's clearly on Sarge. Although Serpentor can't be taken lightly. He was dirty and underhanded, so Sarge may have his most feared and matched foe ever. 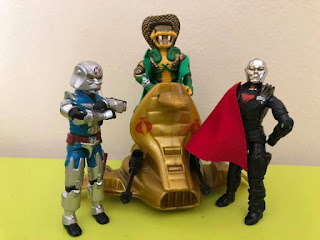 Serpentor added a great new dynamic to the toy line and the tv show. Not just a great opponent for G.I. Joe and a new leader for Cobra, but a rival for Cobra Commander as well. With this overbearing dictator, Commander was old news Any plans he had? Nobody cared. Hawk's social security number? Pffft. Tuna salad casserole? Serpentor had a better recipe. Anything that Commander thought he could do, Serpentor was ready to beat him to the finish line. So to see this was pretty fun to see because it lead to some legendary squabbles among two evil minds who should be working together and sabotaging each other's plans for their own greedy needs. Like the old saying goes "There is no honor among thieves"... 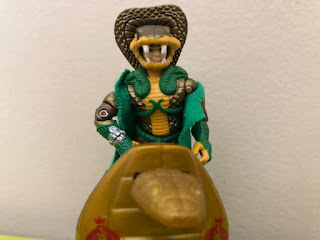 Serpentor had many figures over the years through many scales but in my opinion, his original release was one of the best in the line's history and finally gave us that mean face of Cobra.