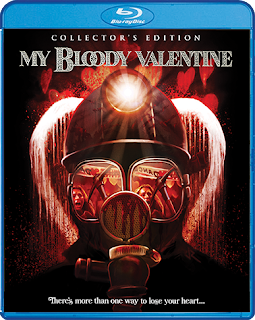 SYNOPSIS:  "On Valentine's Day, someone always loses their heart. Twenty years ago, this small town lost more than that. When supervisors abandoned their posts to attend the town's annual holiday dance, a tragedy claimed the lives of five miners. The sole survivor, Harry Warden, was institutionalized, but returned for a vengeful massacre on the disaster's first anniversary.
Nineteen years later, the town is gearing up for another Valentine's Day party. Teen sweethearts T.J. and Sarah, along with their friend Axel, are among the excited partygoers. But when a box of candy containing an eerie warning and blood-soaked heart arrive, the townsfolk realize that romance is as good as dead. And so are they..."

THOUGHTS: Well, it's been well over a decade since we've last seen this slasher hit bluray, or any home media release in North America thanks to our friends at LionsGate. A good disc, not a lot of extras but decent enough transfer. It sadly quickly went out of print and became highly sought after by collectors and slasher fans. The best part? It included the legendary "missing footage" deemed way too violent and x-rated. Now, thanks to their amazing and eyecatching 4K transfer, Scream Factory helped us out big time and we get to see the movie as it was originally intended by the director. The movie was absolutely fantastic on it's own, but with the deleted scenes, it's even more gory.

But don't be fooled. It's not just a cut 'em up, who did it slasher. It's got a lotta depth to it and a very emotional story including a love triangle involving three friends. There's not a lot of slasher movies in my opinion that can match it's fun and memorable kills with a decent story, but this one does. I'd actually argue that it's one of the few 1980s slashers that hold up and this transfer helps big time. It's almost like watching the movie for the first time all over again.


And for fans who are loyal to the original poster, you can see Scream put their best efforts to make the new cover/artwork as loyal as possible. One of the best covers to actually capture the feeling of the original.

This set includes not only two cuts of the film, but some brand new, exclusive extras featuring interviews with cast and crew, brand new commentary with the director, trailers and tv spots, radio spots(always a favorite bonus feature of mine!), and even a deep look at the two versions of the film.My favorite bonus though is the 35th anniversary reunion panel. Don't get me wrong, a documentary and interview is always great, but in my opinion, as a convention enthusiast, a panel discussion can always show the true love and spontanious discussion between cast and crew. I'm very happy to see that included.

Just like you, I've been waiting for this landmark slasher to get the release it's always deserved and this is it. A solid 10/10.


To order, head over to Shout Factory!