I have been waiting 25 years for this very moment. 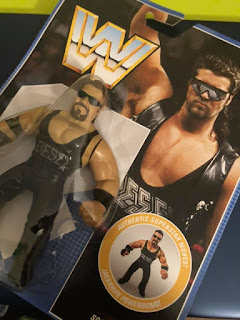 Back story on why this figure is a pretty big deal and deserves to be celebrated: Back in 1994 when the WWF Hasbro wrapped up their legendary, one series still remained unreleased. The so called "Orange Card Series" was to be the next line of figures released containing a lot of fan favorites (and not so favorites): Men on a Mission, a new Undertaker and Owen Hart, Bastian Booger, Jeff Jarrett, and of course, the champion at the time: Big Daddy Cool. The lineup was most likely going to be one of their best in a very long time, but I think after the Green series was nothing but new headsculpts on bodies that were way too out of proportion, it may have been a good thing that we didn't get this line. Still out of all those, the one figure fans really wanted was Diesel. We had Taker, we had Owen, but we needed the champ to round out our collections at the time. Fans would go to lengths to customize the champ, including yours truly who took a Hacksaw Jim Duggan to make Diesel and it looked atrocious but it worked as a placeholder at the time.

Fast forward to 2019. Mattel announced a Diesel figure in what would be the final series of the Mattel Retro line and fans rejoiced. It made perfect sense too. How else could you finish that line up? It had to be with Diesel. The design team at Mattel are all fans, so they understood the importance of bringing this full circle. 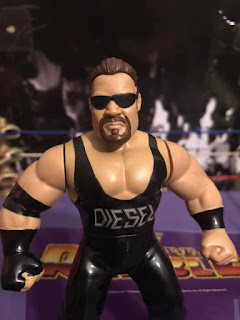 No complaints on my end whatsoever. Everything is perfect. His "Jacknife Powerbomb" action feature is exactly what I always pictured this figure having from the second I heard about it. 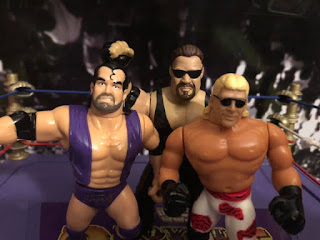 The scale is perfect in comparison to Hasbros and fits it just fine. Considering he towers over Scott Hall and Shawn in real life, his height is just fine. Any worries I had about his size being too tall or even too bulky and wide were pretty much thrown out the window when I stood him next to the other figure. Fun note: Diesel's Hasbro body would've been stolen from the previous Papa Shango, which at the time of Shango's release, was the tallest and most muscular body. It would've been ok, but having this body is a better idea for sure. 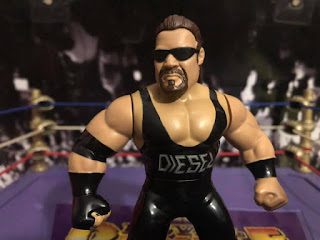 Diesel's headsculpt was a hot topic after the big reveal at Mania Axxess. A lot of fans took issue with it being a little unrealistic and not resembling Kevin Nash too much. I think it's just fine though and in fact is essentially the prototype minus his grimace. In his prototype design, Nash's mouth was actually opened and his trademark sunglasses remained. 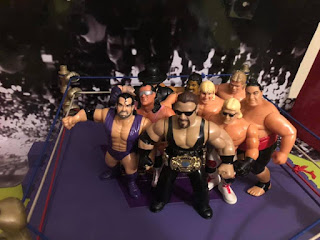 As the leader of the WWF's New Generation, he was head and shoulders above the rest of the roster. Maybe not in technical ability but in terms of legendary action figures. And to finally get this to go on the shelf with the other Hasbro's from that era is overwhelming. I love this figure and I'm glad that Mattel gave fans the opportunity to finally add it to their collections. Closure is a nice thing and I can't help but think I'm the only Hasbro Fanatic who will feel closure with this figure. 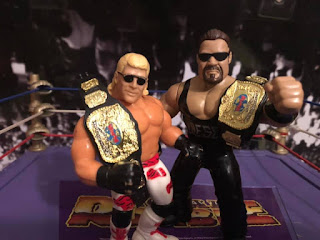