on January 06, 2020
Most of you know I'm a thrifting fiend. VHS, old toys, promo cups, pillow cases. You name it! If it's a pretty fun item, I'll be sure to grab it. But what about those items I've missed out on? Well, today is...kinda...one of those stories. The one that ALMOST got away.


2002 was my senior year in high school and at that time, I also took guitar lessons in Annapolis. The guitar didn't really last, as it became clear I just wasn't cut out for musical fame and fortune, but that's ok, I'd make my dough on other things later in life including buying and selling items I'd find at thrift stores. Coincidentally, my guitar teacher's house was in a neighborhood right behind Goodwill. Usually before my lessons, I'd head over to the Goodwill just to see if anything fun or cool got donated. Usually I'f go through records and VHS and the toy section, but one day I found myself looking at shirts. Not something I normally did but I was just kinda curious that day. Well, I'm glad I did, because what did I find for just a mere $2.50 hanging on the rack? A WRESTLEMANIA 9 CREW SHIRT. 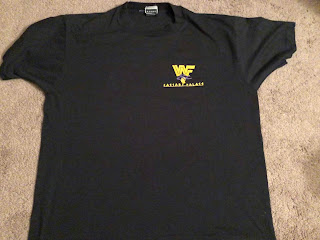 Even by 2002 standards, this was highly collectible and a worthy showcase item. I had a lot of wrestling memorabilia, but not too many older shirts. A Hulk Hogan shirt from 1991 here, a D-X shirt from 1998 there, that kinda stuff. But nothing quite like this! I had a small collection of crew shirts due to my high school wood teacher's brother being a special f/x artist in Hollywood, but this was even more special. Sadly, that day it wasn't meant to be. I realized I left my wallet at home and immediately panicked. I knew if I had left that evening without it, I'd never see it again. But, there's nothing I could do at the time, so I made plans to come back the next afternoon. Hopefully no one grabs it. 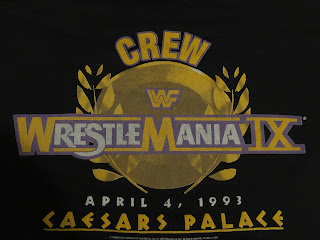 The next day, I head over to my best friend Andrew's house to chat and arrange a trip to Goodwill. He asks as to why I, a very single 18 year old, wanted to spend a Friday night at the thrift store and I inform him I need to grab this shirt. He cleverly cracks a grin, takes his hoodie off and says "oh that's funny...". And what is he wearing? THE MANIA 9 CREW SHIRT! HE KNEW THE WHOLE TIME! OF COURSE. If anyone else was going to grab this, I'm glad it was him. On top of that, he takes off the shirt and hands it to me as a gift. My jaw was on the ground and I was beyond grateful.  Best part? At that time, I was in much better shape than I am now, and was actually able to fit into this shirt! I actually wore it to an autograph session with Rob Van Dam a few weeks later. 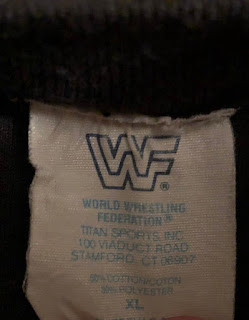 To this day, I don't know HOW he knew, since thrifting wasn't a hobby of his, but he somehow knew to stop and grab that shirt. I'm still amazed. Of course, a few months later, I'd be able to return the favor. At the same Goodwill, I'd find a Road Dogg Jesse James shirt, one I knew Andrew always wanted. So, that evening, after work, I head over to his house and what am I wearing under my hoodie? None other than the Road Dogg shirt. He was super thrilled to finally own it and I think he still has it in his collection. Weird karma, huh? 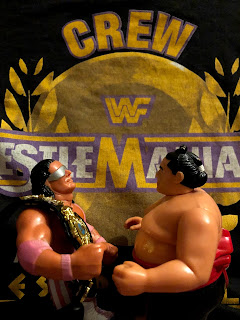 Mania 9 is far from the best Wrestlemania of all time and if you ask me, it's the worst. Maybe it's lack of good ideas, the terrible finish featuring Hogan beating Yokozuna at the last second, lack of good matches, celebrities, or whatever, but it just stinks all around. However, the story of how this shirt got to be a huge piece in my collection gives me a lot of nostalgia and joy.

So, I guess I do have some positivity to say about the event...it got me a sweet piece of Wrestlemania history that not too many others have!