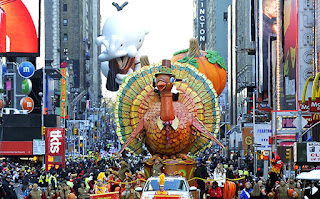 Now normally I start this a week before Thanksgiving but there's so much going on this season that I wanted to get a few extra weeks in. I'm sure you don't mind. Besides, it's not like Thanksgiving gets a lot of hype and buildup by the mainstream anyhow, so I guess I'll spend the next three weeks doing what I normally do all over social media and in real life: shouting about all things Thanksgiving as loudly and obnoxiously as I can until people understand just how great and exciting this holiday truly is. It'll be a fun time filled with lots of fall/turkey flavored goodness...with gravy!

So to start you off with the season, I'm going to give you just a small sampling of my famous Thanksgiving Playlist so you too can get in the fun spirit of the special season! Of course there's not a lot of Thanksgiving themed songs, so I had to get a little creative with my picks but there's some special Thanksgiving connections to these selections and I think you'll find a new favorite!

THE THANKSGIVING SONG BY ADAM SANDLER:

For a lot of people, this is the anthem to Thanksgiving. It's hard for me to argue with that since it combines two of my favorite things: Thanksgiving and comedy.  It's a jovial day all around, so to have a lighthearted, fun reminder from such a funny guy makes it a very mandatory addition to any playlist.


I've already gone into detail on how ridiculous and bizarre this song is, but it also sums everything that is amazing about The Macy's Thanksgiving Parade. Silliness, campiness and over the top performances. Now, Fred Travalena may be known to one generation as an amazing impressionist, but to people my age? He's the guy who tried his best to be a lovable and family friendly homicidal artist. Alongside the fun number done by Scott Bakula from that same year, this was my favorite musical number in all of the Parade's illustrious history.


For a while, Metlife and Peanuts were attached at the hip. Which is great in the long run, because if something bad were to ever happen to Charlie Brown, he'd be covered by the company. Many animated shorts were created for their commercials during this relationship, and this one in particular was very memorable due to the beautiful song that accompanied it. A fun little number that gets right to the point and delivers a sweet message and makes you feel warm inside.

Speaking of lovable cartoon characters with iconic ties to Thanksgiving, the theme to the 1989 Garfield Thanksgiving Special is one of the very few Thanksgiving related songs that hit every bullet point you need. Turkey, mashed potatoes, sweet potatoes and feeling good after the big meal are all the topics you wanna hear in a perfect 30 second ditty by Lou Rawls.


Another song from the 1989 special, this was used during the more softer moments of the special when Garfield and the Gang finally sit down to an amazing meal prepared by Grandma Arbuckle. Before they dig in like complete savages, they all say a prayer and this loving song about loving each other and being grateful for everyone plays. For a mellow song with a little bit more softer tone, this will be right up your alley!


I had originally considered adding "Eat It" but I thought that would be too much of a common pick and way too obvious. In this 15 second tv spot, our hero Weird Al wishes us a very happy Thanksgiving as he and his friends Harvey The Wonder Hamster and Judy Tenuta get...well...weird. For fans of the Weird One, this is a fun little footnote to remember!


My favorite cartoon of the last 10 years. I've been on board with the Belcher clan since the first season and the holiday episodes are usually my go-to episodes and it's usually due to the amazing songs and holiday feels surrounding it. The Thanksgiving episodes are no different. This song gives Linda, the mother of the family, the spotlight to sing about her love of a nice turkey dinner and how grateful she is for those close to her. In classic Linda fashion, she goes way over the top and brings the house down!

I don't think it's too much of a stretch to suggest Planes Trains And Automobiles is THE Thanksgiving movie. It's a great story, a lot of memorable laughs, and a very heartfelt ending. If you've never seen it, prepare to laugh and cry. On top of that, you're gonna get a super memorable theme song that feels so super peppy and poppy. Yes I totally meant to use both those words to describe it. Whenever I hear this song, I automatically think of John Candy and Steve Martin getting into all sorts of Thanksgiving themed shenanigans and it makes me feel fantastic.


Looking to get hyped for the big football game or even that pre-Black Friday hype? Play this thrashing punk tune to get ready for those big time post-meal events. One of Pennywise's later tunes, but still a great way to go from lazy napping sweet potato to jacked up turkey in the matter of no time!


One of my all time favorite Thanksgiving traditions as a kid was watching Survivor Series. It just wasn't the big day unless I got to see my favorite wrestlers grapple in an elimination match that lead to...well...nothing really. Other than a Christmas episode of Superstars, Challenge or Prime Time, this was the way the company would often close out the year and wrap up their major storylines. It was my favorite event as a kid, and most likely because of it's unique nature and ties to the special holiday. That theme though? Iconic. I can't hear it and not think of all the great legendary moments that took place in that first decade or so when WWF and Thanksgiving were interlocked together in my household...

I know, I know. I should really be focusing on Thanksgiving but much like the big Parade ends with Santa, Thanksgiving gets wrapped up with Clark Griswold going crazy in a Santa suit. So...somewhat similar? For me, Thanksgiving isn't over until I get to watch my all time favorite Christmas movie. It's like a great way to bridge both holidays together with one great flick. Plus, my wife and I usually have our Christmas tree up anyway, so it just works.

So there you have it! Some fun songs to play during Thanksgiving! I'm sure many of you have some great songs and additions as well, I'd love to hear them. So please leave me your favorite songs in the comments, please!