- November 04, 2019
So it's come to this. After 14 years of missing out, I decided to head to Parsippany for what's considered to be the best horror convention of the season and dig into the guts and g(l)ory known as...Chiller Theatre. 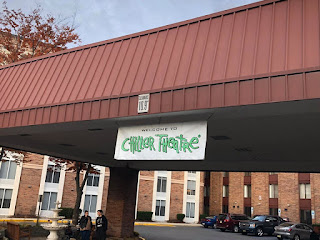 Backstory: I first attended my first horror convention, Chiller Theatre, in 2004 and was instantly hooked. I proceeded to attend many other conventions but I never found my way back to the one that started it all for me. The last Chiller I did was in 2005 and it was one of the most enjoyable conventions ever. So naturally I wanted to go back to but something always stopped me. Car issues, medical, money, family, whatever. I just wasn't meant to attend just yet. But not this show. I was determined to get to it no matter what. It had to happen. It was either or now or never. Well, after all the roadblocks for the last 14 years, I finally did it. I was here. I couldn't believe it. 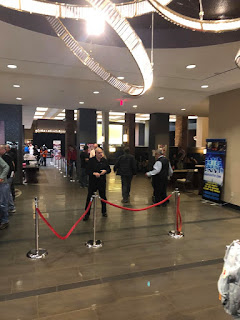 Well, it didn't take me long to feel comfortable. The atmosphere in the lobby alone was welcoming, and familiar all at the same time. The hotel had a fun, modern lobby that was somewhat easy to navigate around. And it didn't take me long to see a celebrity roaming around. Mr. Robert Wuhl, aka Arliss Michaels and Alexander Knox from Batman 1989, was seen grabbing himself a warm coffee. Kinda felt like a throwback to when I saw Adam West grabbing a soda at the gift shop during my first Chiller. 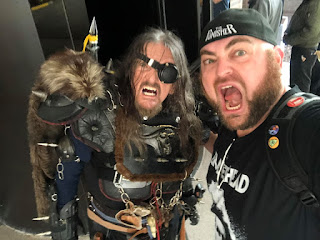 After checking in, I started roaming around. First face I see hanging outside? The Chiller icon himself, Animal! This guy has always been a favorite among fans for his sarcasm, gravely voice and amazing cosplay. Great to see him still holding down the fort and keeping us laughing!


So, finally I was in. I stopped into the vendors and was almost immediately greeted with multiple tables filled with action figures, posters and my personal favorite... 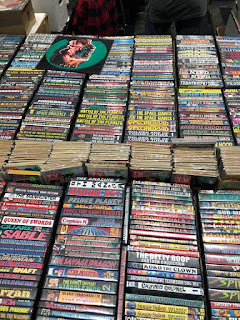 BOOTLEG DVDS!!!! So many! TV shows, movies, pro wrestling, banned cartoons, Something Weird compilations, everything!!!! I've seen a lot of conventions start clearing these vendors out in favor of legit labels, so this was a big shock to me. Anytime I can walk in and see a unofficial copy of Spider-Man and His Amazing Friends with a terribly basic cover and 47 discs packed into one cheap case, I'm happy. 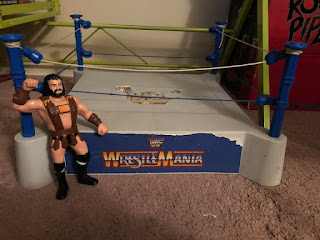 Oh and of course....I had to buy a wrestling figure in the vendors room! Which was clearly meant to be since my friend Brandon gifted me this awesome LJN ring. Yes, I know it's a Jakks ring but it;'s technically an LJN ring mold, so save it. Anyway, Big Herc came home with me simply because I love ridiculous 80s wrestlers who were clearly meant to be a giant rubbery action figure. I think Hercules sums that up perfectly. And if you're not buying wrestling figures at a horror con, you're not really attending a horror con.


So time to meet some guests. 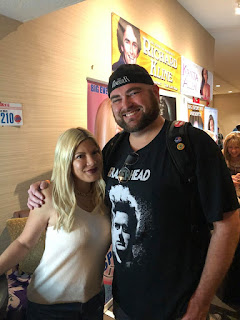 Up first: Tori Spelling of 90210 and Saved By The Bell. Tori was in one of the main parts of the hotel lobby set aside for the big names and reunions and she certainly brought out a big crowd. For good reason too, as she couldn't have been sweeter. She seemed to appreciate everyone coming out and thanked everyone to see her. I told her how much I loved her as Violet Bickerstaff on SBTB and she had a laugh as she thanked me. 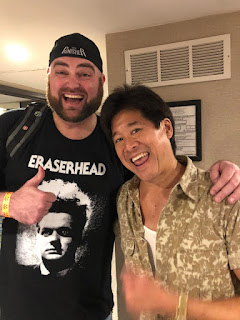 This familiar face, who played in movies such as Revenge of the Nerds and Police Academy, will always be known as Leonardo to me. He provided the voice of the blue bandanna'ed leader of the Ninja Turtles in first three live action movies and had even more energy and enthusiasm than probably anyone else int he convention. Very fun to meet 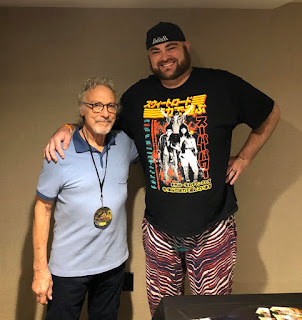 Another Saved By The Bell alumni. We got to talk about his involvement and how grateful he is that the show will be played for so many future generations and how much fun he had being apart of such a lively cast. Really funny guy who also appreciated anyone stopping by and chatting. 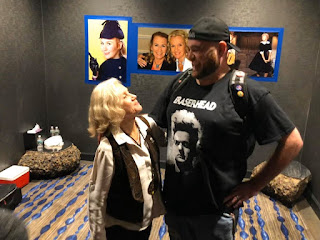 Hayley Mills is hands down the VIP guest in my opinion. She gave everyone a nice hug and wanted to get to know every person that walked up to her. She was beyond sweet and everyone who met her instantly fell in love with her. With her trademark accent and warming personality, she felt like an old friend. You can tell my excitement in meeting her in my photo. 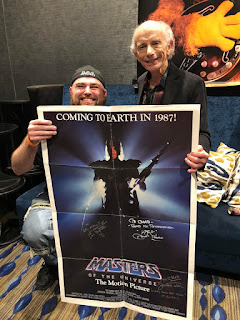 If you know me, you know I love the live action Masters of the Universe movie. I've written and podcasted and ranted and raved about it until I was blue in the face. So finding out that Robert Towers who played Karg in the movie was in attendance, I knew I had to meet him and get him on my teaser poster. He was alongside his former cast members of the Banana Splits. And while he had no photos of Karg, he was so grateful for me bringing my poster and getting to talk about the movie. He took his time in hearing what the movie meant to me and vice versa, I got to hear some fun stories about him filming his role. He also had his wife take a photo of us with my poster as a memory, which meant a lot to me. It was an absolute honor to meet him and if you see him at a convention near you, please take the time to meet him. He's an absolute gentleman! 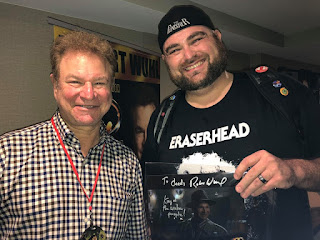 Now. The reason I came to this show: Robert Wuhl. One of my all time favorite comedians and actors. I've been a huge of his thanks to Batman, Arli$$, and even some of his lesser known roles, like in Mistress, Hollywood Knights, and so many others. So, seeing him added to this show, really helped me get my butt in gear and head down. When I met him, I got to hear some fun stories about Batman, including how great Tim Burton was when it came to allowing improvisation on set. How else would we have gotten "King of the Wicker People"?

Robert, much like all the guests I met at this show was was super appreciative of everyone coming by and it showed by how much fun he was having. When I asked him what his favorite quote from Batman, he responded in classic Robert fashion with "My favorite was "Thank you, Mr. Burton, for giving me a job". I don't normally get this starstruck, but after all the years of being entertained, I couldn't contain my joy. I thanked him for coming to the show and what a thrill it was to meet him.


For a show that took me so long to get back to, it felt like home. I've been let down by a few conventions lately and this show picked me back up. I originally had planned on giving up conventions after this one what with the rise of enormous prices, inflated egos of promoters, and other disappointments, but this seemingly reenergized my love of conventions. It felt like great to be back and it felt right to be there. Every guest I met was absolutely stellar, my group of friends had a fantastic time, laughs were had, and I even got to meet some people that I've only known online, which is always thrilling to do.


Don't have any complaints in terms of anyone I met. My only issue with the entire convention was the rooms the guests were in, which were very small almost offices. About 5-6 guests in each room but not a lot of room for attendees to move around. Which, when it came to finding where certain guests were located, was a pretty useful deal. But they felt so cramped. Even then, it's still not enough to make me swear the show off. I can almost guarantee it won't take me 14 years to come back. I'd give this show the highest rating I can and recommend anyone who's never attended to make the trek. So I hope to see ya next time in Parsippany. Next year will be the convention's 30th anniversary and I for one look forward to partaking in the festivities. Especially if it means more bootleg dvds and Batman cast members.

I think you'll know which room is mine... 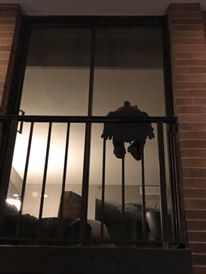 Yes, I had My Pet Monster guarding my room. It worked. Everyone was pretty quiet on my floor!