He-Man at the Macy's Thanksgiving Parade!

- November 20, 2019
Now, I've written about our pal He-Man before, but this is one subject I've been wanting to cover since I started blogging. In the words of Blade from the live action Masters of the Universe movie "I've been waiting a long time for this!" 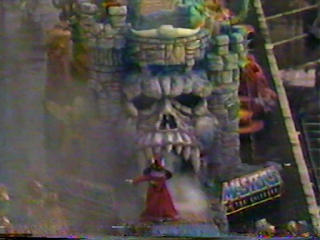 By 1985, you couldn't turn a corner without bumping into He-Man and Masters of the Universe. You'd prolly be in a doctors office and find yourself face to face with a copy of the official Masters of the Universe magazine! If you were in a grocery store, you'd no doubt find a pack of He-Man trading cards! In K-Mart but mom let you go to the toy section? No worries, you'll find a pair of He-Man shoes! It was madness! So of course it makes all the sense in the world to include him in the 1985 Macy's Thanksgiving Day Parade! Of course he wasn't alone. No sir! His up and coming star of a sister She-Ra the Princess of Power was there by his side to fight the powers of evil on Thanksgiving with him! 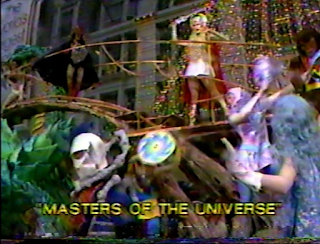 As a float, it pretty much stole the show in 1985. There were other fantastic floats and showcases during that year, but for most people, He-Man and She-Ra beating up their foes was the thing to see. While we were in the peak of He-Man's popularity here, I can't help but think She-Ra was the shining star between the two of them this on this day. I get that Mattel wanted to push the toyline and make her their next big star, but that old muscle head barely got any time. Not that I'm complaining mind you. I'm for anything She-Ra, so this was just fine with me. 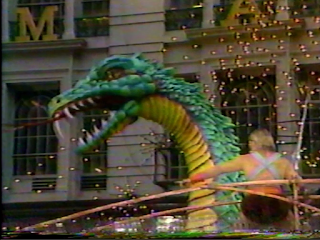 Of course, when the mighty defender of Greyskull was featured, he was mainly forgetting how to stand in the right spot and essentially missing his cue to shout I HAVE THE POWER! I guess when you're pretty much just wearing a tiny pair of furry underpants in 12 degree weather while fighting a dragon and rolling down Manhattan, it's easy to forget a spot or two, but at the most crucial moment of the presentation? Come on! Ya gotta be on your feet, bro. 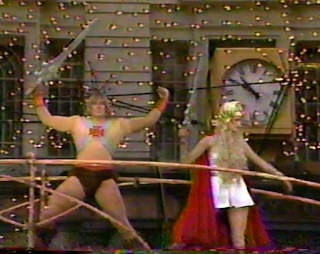 Thankfully, She-Ra was a real pro and able to keep everything running smoothly.

So the 1985 float was simple, right? Got the point across, showed off some great characters and gave us a little action in our parade. All good and gravy but in 1986, some Mattel executive stood up and said "Oh screw it, let's just pack about 4,500 characters on a 75 foot float and have them just go crazy.". Because that's...the best way to describe it.  Imagine the Snake Men, The Horde, about 47 of He-Man and She-Ra's allies across a tractor trailer and on top of that...oh did someone mention a giant freakin' dragon that stood between Greyskull and the Crystal Castle? On top of all this? Dolph Lundgren was there to narrate this massive event. And boy did he want to be elsewhere that morning. Now, when I say a lot is going on here, I feel like I'm probably downplaying it. It's one of those things you need to see to believe:

Fun sidenote: the concept art for the 1986 float can be found in the spectacular "The Art of He-Man and The Masters of the Universe" coffee table book and you can get a good gauge as to just how bonkers this float was... 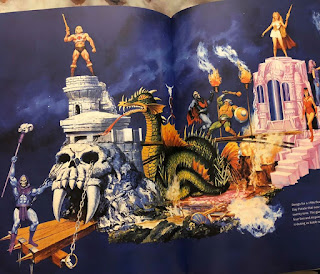 I understand that many people have written about these floats over the years and tried to capture the crazy feeling of both, but I've been wanting to throw my hat in the mix and just say how much I love these for way too long. It was like watching a live action episode of both cartoons or even thatl live show at Universal Studios. As much as I adore the parade even to this days, I feel like it doesn't take the same risks it used to with massive and insane floats like this. To some degree I'm grateful, because it keeps a lot of these older floats unique but at the same time, I'd love nothing more than to see a giant float carrying about 98 characters from Frozen 2 fighting each other. In fact, isn't that what you'd want too?

Much thanks to Matt of Dinosaur Dracula for his assistance in this article.