Well, summer vacation is over and it's time to get ready for all the fun Halloween will present us. It was a decent summer, but I'm ready for hoodies, cold wind, apple cider and lots of orange and black goodness around every corner! Now, that's still a ways away, so until then, I wanted to get some blog rust off.

Recently I got to go VHS hunting with some friends with the goal to find some gold. They found some great gems for their collections, but me? Well...let's take a peak at what I added to my ancient vhs cabinet... 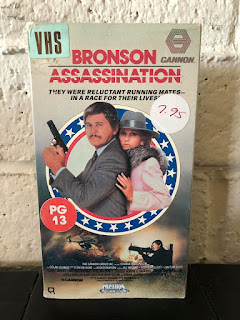 Oh of course I'd pick this. It's so typical of me to add a Bronson-Cannon film that I'll probably never watch to my collection. I mean, they're not awful movies, they're just all the same. I've seen at least 67 of these Bronson movies come through my collection, but never really watched them. To me they're all the same but I still can't turn them down. Especially with all these amazing rental stickers all over the covers. Oh and Media? Oh sign me up! 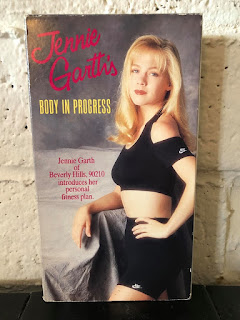 Speaking of being a sucker, anytime I find a celebrity fitness video, I always have to grab it. Whether it's Dolph Lundgren sharing his thoughts of physical health benefits on the beach or even Stephanie McMahon telling potential winners how to get a slammin' booty, I'll buy them. Mainly for the laugh factor. Most of these tapes offer nothing useful and usually sit on shelves, but the terrible dialogue is usually what makes them entertaining.  Enter Jenny Garth. One of the hottest stars on tv in 1992, thanks to 90210. What she lacked in charisma, she made up for in beauty and thanks to this tape, we too could be as beautiful as her thanks to her dynamite workout and diet tips. No doubt that if anyone can help me get in shape, it's the girl that broke Dylan and Brandon's hearts! 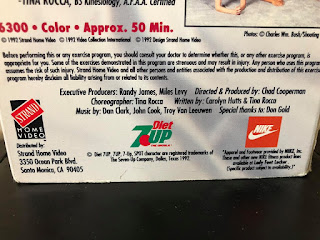 Of course, what really grabbed me about this tape is the fact that it's sponsored by Diet 7-Up. As soon as I saw those logos, my VHS hunter instincts immediately knew what this meant: commercials. And sure enough I was right. At the end of the tape, it features a Diet 7-Up commercial and even a big advertising graphic for Nike. The amount of 90's nostalgia in this one tape can't be described, so I suggest you check it out here.


THE MAGIC OF THE GOLDEN BEAR: GOLDY 3: 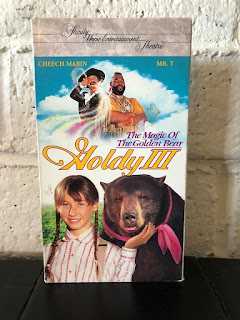 The story of this movie goes that Cheech Marin plays a magician who casts a spell to convince a little girl to buy her magical bear. And along the way...ok, confession, I couldn't get through this one. If the cover didn't feature Mr. T looking pissed off with his life decisions and Cheech desperately wanting a big fat jay while dressed like an extra from Hook, I prolly would've passed. Although further research tells me T plays a "ghostman" who encourages the freedom of all animals and almsot acts like a spirit guide to this little girl and she runs with her magical bear. So maybe I made a hasty decision in not watching this tape all the way though. Two minutes already seemed like an eternity. But Mr. T as an animal loving ghost? Hmmm...think I'll revisit this afterall.What's to lose other than my sanity? 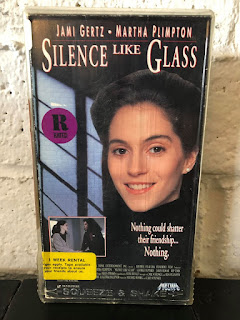 This one wasn't purchased for the movie, although I've heard people tell me it was pretty good. But the real reason I bought it? It came from a hometown video store in Maryland that I used to frequent all the time before it closed: 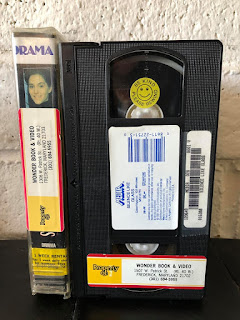 Ah yes, Wonder Book...we meet again! I wrote all about Wonder Book a few years ago when I went back home for a fun adventure with some awesome friends, so I won't go too crazy into detail. I will say though, this comes not from that particular location, but another store that closed in 2006. Still in the same city, but a little further down the road. It was a weird location too. Always poorly lit and had the most massively heavy looking bookshelves containing VHS I've ever seen. It was smaller than the regular Wonder Book but actually had more VHS. I remember being there on the last day and scooping up as many tapes as I could knowing they'd either end up in a warehouse or a dumpster. Most if not all mentions of this particular store have been wiped from the internet and most people's memory but for me, spending all those hours in that store will remain with me forever. And getting this tape with all the rental stickers and labels, just helps me miss it even more! 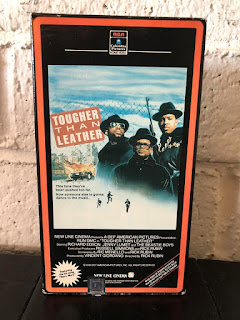 The real prize out of all the entire lot of course was THIS. I'm a huge RUN-DMC fan and even I didn't know it existed! An action movie starring RUN-DMC, Rick Rubin, Russel Simmons, Slick Rick and The Beastie Boys? My gosh, this has me written all over it! Truth be told, it's not a great movie but it certainly comes off as a fun effort and even a late 80's blaxploitation movie. This is also from a time when New Line Cinema was taking a lot of chances to see what could work for them. Kinda similar to how Def Jam was taking a lot of chances as well, so the connection worked to some degree.

The soundtrack is fantastic, the acting is...well, the cast weren't classically trained actors, so it's as good as you can expect. However, it's a fun treasure and a fun foot note in the history of RUN-DMC and hip hop. If you ever find it out in the wild, I highly suggest picking it up!