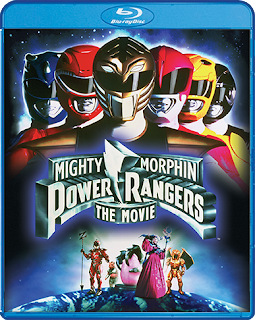 "Power up with six incredible teens who out-maneuver and defeat evil everywhere as the Mighty Morphin Power Rangers! But this time, the Power Rangers may have met their match when they face off with the most sinister monster the galaxy has ever seen – Ivan Ooze. Unleashed upon the good citizens of Angel Grove after six thousand years of imprisonment, Ivan Ooze strips the Power Rangers of their powers! Now they must journey to a distant planet to learn the secrets of the ancient Ninjetti. Only then will they become empowered with strength enough to restore their Morphin ability and defeat the evil Ivan Ooze. Join the Mighty Morphin Power Rangers and their new Ninja Megazord as they fight to save Angel Grove and the world from evil!"

By 1995, Power Rangers were unstoppable. They had taken over the hearts and minds of children everywhere, yours truly included. The exciting Saturday morning had become a merchandising machine and pop culture icon so naturally a movie had to follow. Something to make the PR universe even bigger, brighter and badder! And to usher in a new adventure, the tough teens from Angel Grove were given a new gimmick(the Ninjetti), some rad costumes, a much bigger budget and a brand new villain... 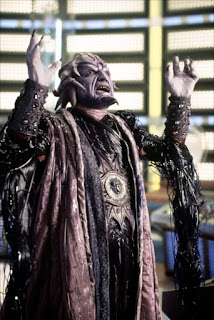 IVAN OOZE! The campy, over the top slimy supervillain was introduced as one of Zordon's most legendary foes and in my opinion, the true star of the movie. Played by English actor, Paul Freeman, Ivan is portrayed as a big smart-ass who just wants to mess around with the Power Rangers, attempt to murder Zordon, and turn the parents of local children into slaves. If you take anything away from this movie, it's gotta be how amazing he is. Part HG Welles, Part Frank Gorshin as The Riddler, Oooze steals the show and makes it his own.

I'll be honest, back then, I simply liked Ooze and his goofiness. I was also a HUGE fan of Batman Forever(as I am to this day), so it's not like my standards were too high. But now? Well, I love him even more. The silliness of this character was really refreshing especially how serious we take super hero movies and the characters these days. In 1995, we were a little more lenient with such characters would be portrayed. We were Post-Tim Burton and Pre-Blade, so any and all superhero movies were on the hokey side. Truth is, I think sometimes we need that and remember that these movies are intended to be fun. Ivan brings that to the table and even though I'm not the biggest Power Rangers fan anymore, I can see myself playing this when I need a good laugh or just a feel good movie to watch. 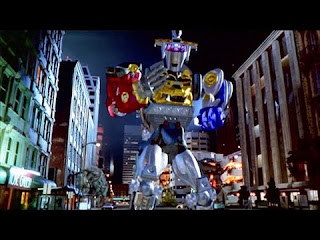 On the other hand, there is of course the CGI. By 1995, CGI was just merely toyed with and not exactly where it would be today. Even back then, I thought the effects were cheap. Now? It's worse. However, a movie that features a big purple-ooze covered demon fighting a bunch of teenagers in Robocop outfits? We can let this one slide. It's not like the CGI in Avengers will hold up in 5 years either. Forgiven. Especially after those awesome new costumes we got. A Power Ranger with headlights on their helmet? Sold. 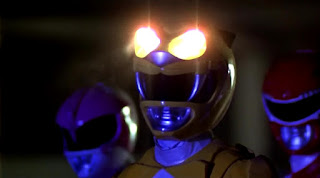 The "Look Back" is pretty interesting to watch. Not a lot of new information outside the creative process is discussed but it's still fun to hear just how much fun everyone had on this film. Especially Paul Freeman. The original 1995 press featurette also features the majority of the cast speaking about their experiences, which I tend to remember see being aired on Fox at that time, so that was a nice little flashback. My only criticism about the features is it didn't feature the music video for the 90's-cornball classic "Trouble" by Shampoo, which was played nonstop all summer long and forever tied to this movie. But, if that's the only major qualm I have, it's a pretty amazing release, wouldn't you say?


Revisiting this movie was a real joy. I hadn't seen it in well over 20 years. I expected corniness but I didn't expect to love it as much as I did. If you're looking for a fun superhero adventure, check this one out.

Shout! Factory has made me fall in love with this movie all over and again, and I'm sure they'll do the same for you. If you'd like to purchase this and other great Power Ranger titles, head on over to the internet's equivalent to the Angel Grove Juice Bar and pick yourself up a title or two!