on January 15, 2019
Back in January 1999, my mom and I hopped on the AmTrak to take a VERY special trip to NYC to take a tour of MARVEL COMICS OFFICES! Well, it took a while to get there, but let's go back a little... 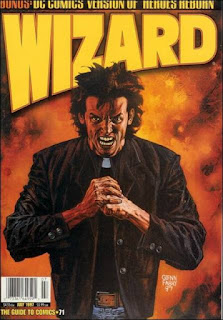 It all started with a Wizard Magazine article. Issue 71 to be exact. In the summer of 1997, a Wizard staff member grabbed a photographer and took a tour of the Marvel offices. With a look at the famous Marvel Bullpen, the offices, and the amazing comic book atmosphere, I was loving every second of the writeup. Although the question remained: How do I get in on this? Surely there's a way for fans to jump in and experience all the fun! Well, at the end of the article, it was revealed that you can indeed schedule a special walking tour! But, it would be a very long wait and could take a few years to get up there. But, if it meant a trip to NYC to see this live and in person? I'm willing to wait! So I asked my mom about the possibility, and she thought it would be a fun trip for the two of us. With Quicksilver like speed, she called the offices and after about a 15 minute phone call, we landed on the list! We were headed to NYC!

But not for about a year and a half...

A lot happened to me in the year and half but the Marvel tour always stuck in my mind. Even resorting to reading that writeup just to get me hyped all over again. It felt like the longest wait ever. Then, in December of 1998. It happened. I received our confirmation letter. In a cool Spider-Man envelope too! 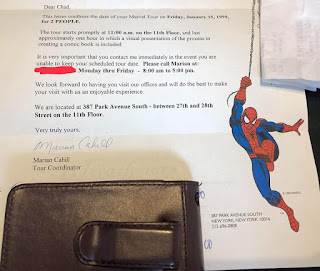 There it is. Official letter head! I felt like Ralphie getting his Little Orphan Annie decoder pin in A Christmas Story. This is legit. It's happening and within a month after receiving this note, I'm headed to the Big Apple to munch on some pizza, see the sights and shake hands with Wolverine. This letter felt like a golden ticket and indeed made me feel like I was in the upper echelon of comic fans. Of course, I knew deep down I wasn't that special, I was just patient as hell waiting for this moment in which I'm sure a lot of people dropped out. But...wouldn't you feel that way too?


So we rode up on the train to Penn Station from DC on a Thursday night and stayed at a very nice, but old fashioned hotel. All I remember about it was a mini tv on a wooden table in our room, which I proceeded to put on WCW Thunder as we ate room service and the breakfast buffet the next morning was pretty sweet. But food and bad wrestling wasn't what kept my focus. On Friday, we walked from our hotel, got lost multiple times but finally ended up at the Marvel offices. To see the city, as large and impressive as it was, was  pretty wild. Even if we ended up in the wrong place about 15 times. But after all the waiting, we were finally here. 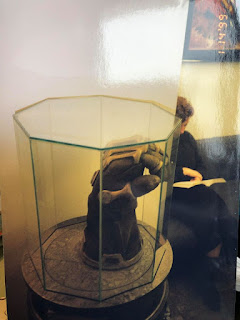 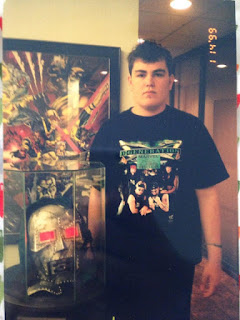 We entered the office waiting area, which consisted of so much cool stuff including Thor's Hammer, Dr. Doom's helmet and an Infinity Gauntlet all in glass cases. We looked around at all the cool props and artwork and sat down to wait. Another family came in and introduced themselves and we made some small talk. And then IT happened.

Bursting out of one of the doors was the man. The myth. The icon. SPIDER-MAN. Oh man, we all got a big smile on our face seeing our favorite webcrawler enter the room and discovering he would be our tour guide. Of course, everyone in the office and on the tour kept the kayfabe to make sure his act was kept in tact. My favorite moment was when he talked to the secretary who he proceeded to say "Allright, we gotta get this going! I have a date with Mary Jane tonight!". Seeing this guy stay in character and booming with excitement really helped us enjoy the tour even more. 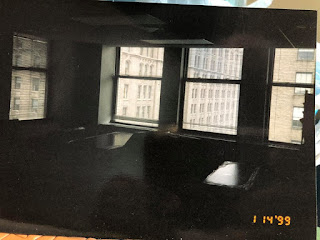 The tour was pretty short considering how large the offices were, maybe an hour and a half or so and photos were limited due to upcoming projects and the privacy of the staff, but any empty offices and people who gave us permission, we took photos of. I did got a photo of Marvel's big reveal of their first restaurant in Universal Studios! 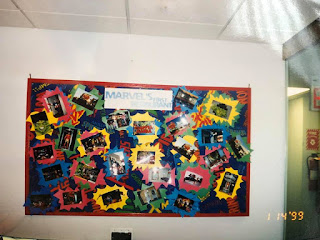 The first segment of the tour was going into a presentation room where we were given a brief history on Marvel's existence. From there, we were taken through the offices and walked by a few people working on new issues and Marvel business. It was pretty cool see all these people just plugging away at their projects. We even passed by then editor in chief, Bob Harras's office, who was on the phone but gave us a friendly smile and a wave. That was pretty rad.


We also passed by the famous Bullpen where artists and writers come together and bounce ideas off each other in order to create some new comics! We didn't get to go and see what they were working on up close but just seeing it in person after all those years of hearing about it, was good enough for me! 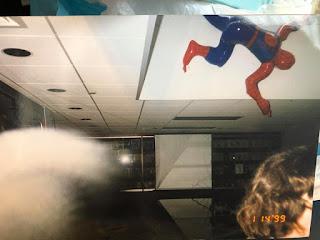 After walking around the main floor, we headed upstairs to a relatively empty floor. Marvel had a lot of financial problems at this time, so we only saw empty offices and boxes filled with papers and extra comics. With that, this amazing tour ended but before we left, we were given goodie bags filled with comics, Avengers ID cards, some trading cards, a mini art print and some cool promo sheets of upcoming releases. But the most important souvenir...? A photo with SpiderMan in the Marvel offices. 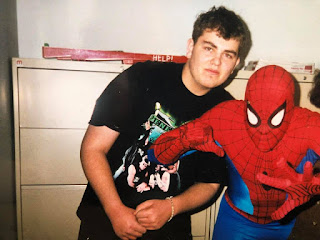 He was happy to pose for photos and even do the trademark Spidey poses. The other family didn't bring their camera for some reason so it was a pretty quick photo shoot. My mom and I had a train to catch at Penn, and SpiderMan had a date with Mary Jane, so there's no time for sad goodbyes. Funny enough, when we hopped in the taxi, it played a PSA about buckling up our seat belt. Who was the voice? None other than Batman himself, Adam West! This could be the best weekend ever! SpiderMan, Batman, and at Penn Station I had a Roy Rogers burger and Holster fries.


So 20 years later, am I still the biggest comic fan? Not exactly. I love the movies and animated series but I still pick up comics when I can. However, the memories of this tour will stick with me forever, fan or not.From what I've read, Marvel doesn't do public tours anymore, so it was great to hop in when they did.