on January 02, 2019
Back in 1996, there was no bigger star in the WWF than Shawn Michaels. He was everything I wanted to be. Athletic, good looking, funny, and  dressed awesome. Of course his outfits prolly made him look like a zebra printed psychopath, but that just added more flair to his already awesome character. And thankfully for us fans, that also lead to lots of great action figures! From his first AWA Remco figure in the mid to late 80s to current day Mattel figures, we've seen a lot of incarnations of the Heartbreak Kid (some of which you'll see throughout this month) but let's talk about his very first Jakks figure! 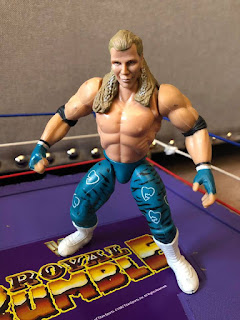 Jakks Bone Crunching Superstars debuted in Fall 1996 with 6 major figures: Diesel, Razor, The Undertaker, Golddust, Bret Hart and of course the star and champion at the time, Shawn Michaels. These figures were pretty unique. They were 6 inches and of a Hasbro or Bend'Em figure but they did have articulation at the head, shoulders, waist and legs, so you had more play value. Yes, you could finally preform The Undertaker's tombstone, Diesel's powerbomb, Razor's Razor Edge, Bret's sharpshooter and Shawn's superkick! A someone who hated, absolutely HATED The Bend'Em line and who also desperately missed the Hasbros, these were a massive upgrade and I was all about them from the first line. Since it was the first line, they had a lot of kinks to work out. Mainly the way the figures stood and the arm and leg joints. The appendages had a tenancy to be rather fragile and fall out super easily, and since my HBK got a lot of play, after a while he started standing weird. I can tell you even after opening him, his ability to stand was questionably at that time. Loose legs and arms were a nuisance but it was a rather steep price to pay for such a fun new figure line. Of course, those issues were solved later on in the line and were perfected. 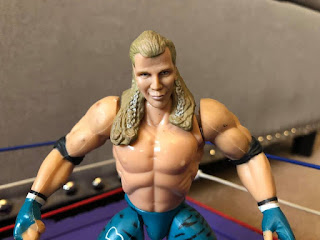 My favorite part of this figure is without a doubt his face. It's a pretty good likeness of the man himself but it's still rather goofy looking. Shawn was known to make some ridiculous faces on screen but this looks more like he's just trying to hold in laughter at some joke he thought of and won't tell anyone. And the hair. Holy cow, I've seen She-Ra figures with less hair than this figure. But at least they had the intelligence to include his crazy, pirate earrings that he was known for wearing. 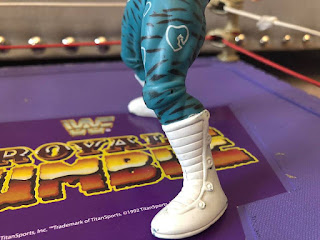 His tights and boots were also pretty good. Reflecting his tights from his fantastic 1995 ladder match with Razor Ramon, the teal zebra and hearts are a memorable design. Mattel even revisited this design a few years ago and is almost a spitting image of this figure (albeit, better quality): 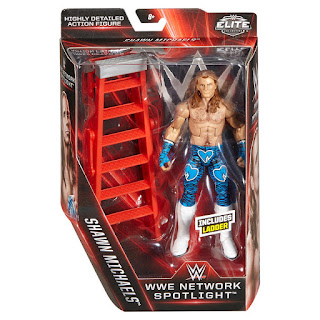 In terms of just a fun figure to play with, it's a pretty good one. As far as Shawn Michaels, it's good but there's better figures out there even to display. Still, since Shawn is my all time favorite in ring performer and I do have such positive memories getting him for my birthday in 1996, this figure still holds a lot of sentimental attachment.