on January 17, 2019
Here they come! The Steiner Brothers! The world class athletes from Michigan arrived in the WWF, to much fanfare, in late 1992, off a very hot period in WCW. Fans salivated at the idea of a potential WCW vs. WWF tag team battles. Yup, a lot of fantasy warfare going on there in our minds! 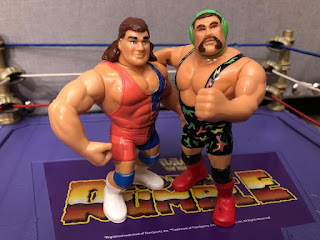 There also was fantasy warefare in the toybox! Rick and Scott got the Hasbro treatment in 1994, a little after their departure (which was pretty common at that point) which being released later in the line provided the Steiners to take on a lot more opponents when it came to playtime. Ever wanna see them battle the Rockers? Or The Mega Powers? Demolition? The Mega Bucks? The sky was the limit! For some reason though, I could only find Scott in stores and could never score a Rick. Which was always a theme. If I had a Rick Galoob, I had a Scott Hasbro. If I had a Toy Biz Scott, I had a Classic Superstars Rick. For some reason, I've never had two from the same line or company. It just seemed to happen in a weird way. Until last year that is, when my friend and fellow Has-bro Steve hooked me up with these guys and I'm so happy to finally own these! 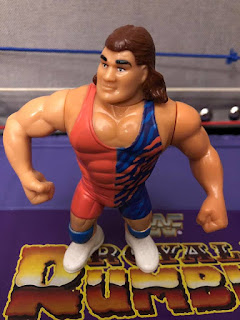 Scott received a repaint of Mr. Perfect's body, which suits him since he was the more "fit" of the two. Rick wasn't fat by any means, he was still in great shape but Scott had the better body and a bit more athletic for a guy his size. His head sculpt is pretty good but his outfit is where the real money is. Now, he was also a snappy dresser and since it was the mid 90s, his outfits were a bit more stylish and simple than his brothers. It's almost like if Saved By The Bell had a baby with your sisters Caboodles train case. It's just so 90s that it's downright amazing. This is the Scott I prefer to remember before he became jacked up on steroids and yelling about his cock and slapping a bunch of women half his age on the ass. 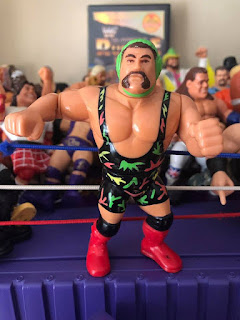 Rick, who always had the crazier gear got a little more of a cool design. Using an Owen Hart torso and a Demolition Crush's legs, this amazing paint job wasn't exactly his most memorable outfit but it definitely worked for him. Rick's face is a pretty good sculpt too. Almost giving him the ability to bark like a dog, which he was known to do and no one would question. The neon colors and crazy designs definitely make this figure a great one to display and helps him stand out. Just like in real life. 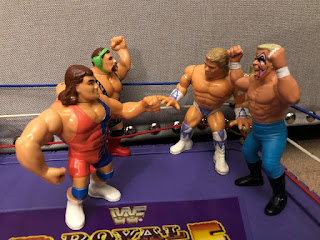 These figures made for great play and if you were a fan of both companies, I'm sure you had to have them. I know that these definitely made more play value than the Galoob releases, so it was nice to finally see this great tag team done right in action figure form.