on January 07, 2019
1992 was a bizarre year for the WWF. It was a big transition year, departing from the previous "Hulkamania" era and focusing on smaller, more younger talent. In that time, the company offered some wild and memorable storylines and characters. But perhaps none more wild than PAPA SHANGO! 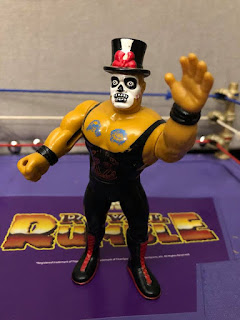 Portrayed by Charles Wright, Papa Shango debuted in 1992 a little before Wrestlemania 8 but was thrust into the main event when he was given a big push and feud with The Ultimate Warrior. Essentially, he was a crazy witch doctor that would put spells on everyone he passed. In a very legendary segment, he made The Ultimate Warrior vomit due to a "hex". He wouldn't stick around much longer than a year but would return years later as the ultimate fighting machine "Kama" and the famous pimp "The Godfather". Wright would be inducted into the WWE Hall of Fame in 2016.

Of course, being such a cartoony character, Papa Shango was simply a perfect fit for a Hasbro figure. Much like his character in real life, this figure stood out. Given a new sculpt with a familiar spring loaded punch feature and removable bone necklace(which I'm obviously missing), Papa was one of the taller figures created for the line. His newly sculpted legs and torso made for a great menacing villain that would even come to eye to eye with The Undertaker or The Ultimate Warrior. On top of that, due to his size, his body would've been repainted and reused as Diesel's body had the fabled "Orange Line" been released. Of course, this would lead to many customizers using the Shango to create the most accurate Big Daddy Cool they could. 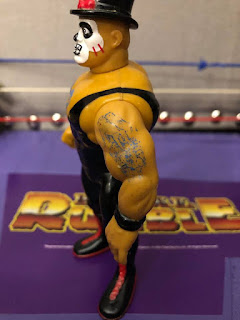 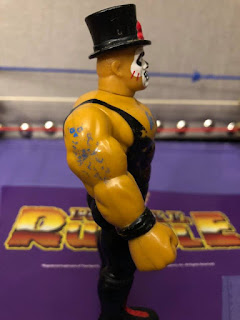 One thing that stands out to me is Shango's tattoos. Charles is a heavily tattooed man and Hasbro was rather selective with who they'd give ink to but I'm glad they chose to give him his arm and chest tats.As you can see, my figure is a bit on the faded side, but you can still see the effort Hasbro went to get his designs as accurate as they could. 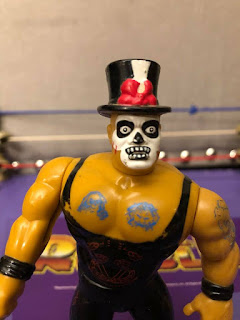 And then there's the face. Wow. Check out that face paint! One of the most accurate paint jobs in the Hasbro collection! My only issue is his hat isn't removable, an issue I also had with the Undertaker. That said, the hat works and makes him look more menacing. In fact, I don't think I'd trust Hasbro to make a figure with a removable hat. Frightening to think...