on January 04, 2019
What better way to describe this figure? Good? Great? Nah...this figure is absolutely PERFECT! 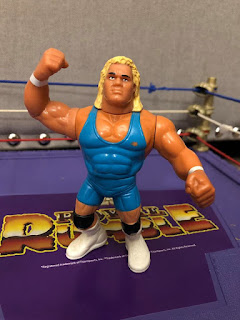 Mr. Perfect Curt Hennig was one of the all time greats in pro wrestling. His ability to cut an obnoxious promo and put on an amazing match was matched by no one else. Curt could beat you so quick, it would make your head spin. On top of that, he'd brag about it too, making him come off as that a-hole jock you hated in high school. You couldn't beat him. No matter how hard you tried. 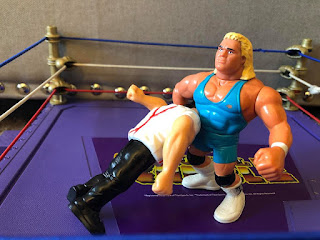 His figure was just as perfect as he was and his action feature was one of the few figures that actually gave you the opportunity to preform his "Perfect Plex", a move in which he hooked his opponent's head, grabbed their leg and dropped them on their back for their 3 count. 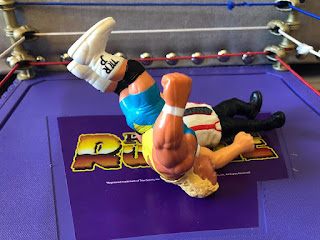 Ok, so the action feature itself was not "perfect" per se, although it's still closer than we could've gotten at that time. Hasbro didn't always give a lot of thought to capturing the signature moves of every superstar released so it was rare when we got these accurate moves. But when they did it right, they did it soooo right! Besides, we could've received a jumper style or a clothesline (which, still would've been amazing imo). In it's defense, it looks so cool. 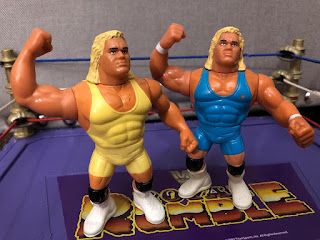 Two Mr. Perfect figures were released within a few series of each other. . The first release in his yellow gear seems to be more sought after by fans. I prefer the second blue figure because it uses his gear from his legendary match against Bret Hart at Summerslam 1991 (right down to the yellow pattern on the back of his tights). 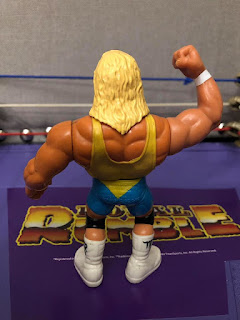 Not much difference in the figures, except colors. Although the first Mr. Perfect is missing his "Mr. P" monogram on his boots. Which, I never noticed until just a few weeks ago. I do find that a bit weird because he had "Mr. P" on his boots throughout his WWF career, but it's not really a huge deal for me to sit here and marinate in anger. 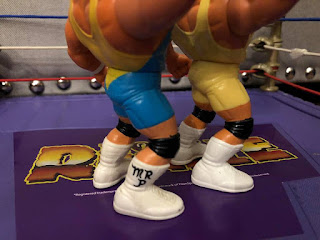 Besides, this just proves that even his mistakes were...well...perfect!