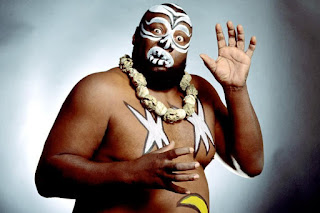 Truer words were never spoken. The Ugandan Giant was born onto the wrestling world in the 80s, taking on all comers in every company he had every been apart of. WWF, WCW, WCCW and everywhere in between. Kamala was used as a big attraction for the hero to take on. So if you were in Philly and you had a ticket to an afternoon at The Spectrum, it was mainly to see Hulk Hogan defeat his larger than life opponent. And man, was he effective as a heel. You would believe he'd chew Hogan's head off and swallow it. But, the red and yellow prevailed and after a while Kamala was gone. Until 1992 when he returned to the WWF. Same beast, but a little toned down for the era and was managed by Harvey Whipplemen and Kim Chee and his first and most memorable foe? THE UNDERTAKER. They'd battle for months until The Dead Man disposed of him in a casket match at Survivor Series 1992, which I loved. It wasn't a five star classic, but it was a lot of fun for a strange kid like me. 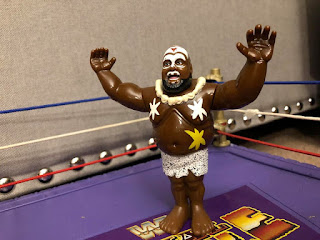 Of course his action figure, was also fun. The sculpt on his face and upper torso are absolutely terrific and really show you just how scary he can be. For a figure with such intricate face paint, a lot of effort was put into making it as accurate as possible. Capturing his famous yell was a great touch as I'd hate to see this figure with some dull expressionless look. 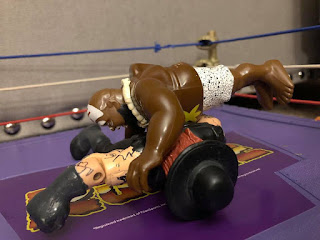 Unfortunately, Hasbro decided to give him the dreaded "jumping" feature which makes so little sense to me since Kamala didn't really do a lot of aerial maneuvers in his later career, if any at all. Of course, the only way I can justify this figure's action feature is the fact that it made preforming his finisher (Kamala would literally just belly flop on his opponents back) but otherwise I'm lost. It was good to see they created his tribal skirt into his legs, seeing as they could've just reused another barelegged mold so despite the limited playbility on this figure, it still remains faithful to the character and still provides some fun play.


Kamala's original figure was meant to have a MOON on his belly, since Kamala always had a moon. But instead, we were given a somewhat inaccurate figure with a STAR. Why? That's the question fans have been trying to figure out for YEARS and it's never been answered by anyone who truly would know. Many have speculated anywhere between religious or tribal reasoning, a snafu in production, or just didn't meet the standards of WWF or Hasbro. Will we ever truly get the concrete answer? Maybe, but 25 years later, no one still has any idea. It's been rumored that anywhere between 12 to 30 official moon belly figures do exist, on card and loose. Customs are pretty easy to get of this figure since it's nearly impossible to hunt down the real deal.
Hasbro's line had a lot of weird anomalies and the famous Moon Belly figure seems to be one of the favorites. For fans who want the figure, they're looking at thousands of dollars. While that's a very high price to pay, you gotta admire their dedication to the craft to hunt this down. Maybe some are looking to complete the entire series, some are looking to preserve it for archival purposes? Whatever the reasons, I salute them.


Kamala will go down as one of the greatest and most memorable gimmicks in pro wrestling history and this figure, moon or star, will be remembered fondly by all those who loved to live in fear of him.

Although, I'm sure Undertaker would disagree... 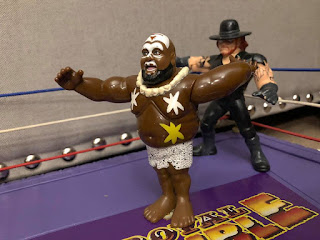