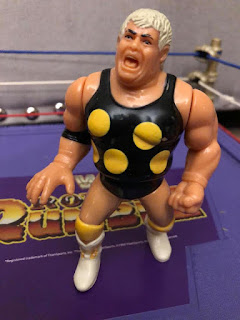 The Bull of The Woods, baybeh. Dusty Rhodes went from big bad Texan with a giant oatmeal splotch on his tummy in the NWA to fun loving polka dot enthusiast when he jumped ship to the WWF in 1989. Given the freedom to be as goofy as he could possibly could, Dusty would cherish his time in the WWF, which no doubt meant bigger paychecks and less stress on him (he was on creative for a good amount of time during his run in NWA). While The Dream received a lot of merchandise in his day, nothing stood out like this figure. 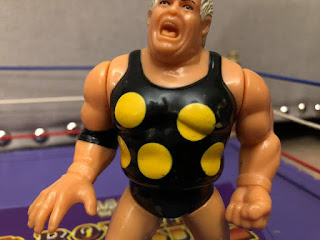 His figure was a bit on the heavier side to reflect Dusty's less than stellar body (of which Dusty himself often poked fun of). In terms of matching a wrestlers physique, this had to be one of the most accurate in the line. The rotund nature of Dusty not only made him stand out in real life but the toy aisle toy too. His action feature? The Dust Buster. Pull Dusty's head back and he bops both his tummy and famous bionic on his opponent. A similar feature given to other jelly beans like Akeem and Andre The Giant. Considering their body types, it worked. You certainly wouldn't have been able to do that with Razor Ramon or Scott Steiner.  You also wouldn't see either of them dancing around like a goof with Mean Gene Okerlund. 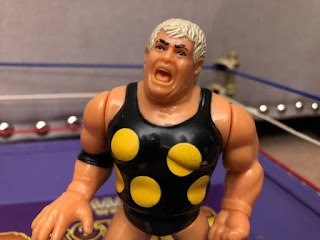 The real notoriety behind this figure came when Big Dust left the WWF to head back to the NWA, now named WCW, halting most of his merchandising. Of course that didn't stop Hasbro from shipping a bunch of figures which would later be rumored to be pulled from shelves due to his new contract with WCW, lessening the amount of figures on the shelf which would lead to his rarity. For years in the collectors market, Dusty would go for sometimes close to $100 bucks before sliding down in value. Now, he's still a desired piece in every Hasbro collection, but not as valuable. You can easily find him now for at least $20, minimum, which is still a pretty high price compared to other Hasbros. Unlike others though, only one figure can say they had a sassy manager named Sweet Sapphire.

With a great likeness, fantastic pose and fun action feature, this figure definitely belongs in a class all by itself. If you don't have this figure yet, I implore you to search him out and grab him. It's a great piece of wrestling figure history. Plus, why wouldn't you want him in your collection beating up Ric Flair? 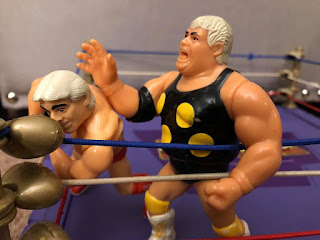