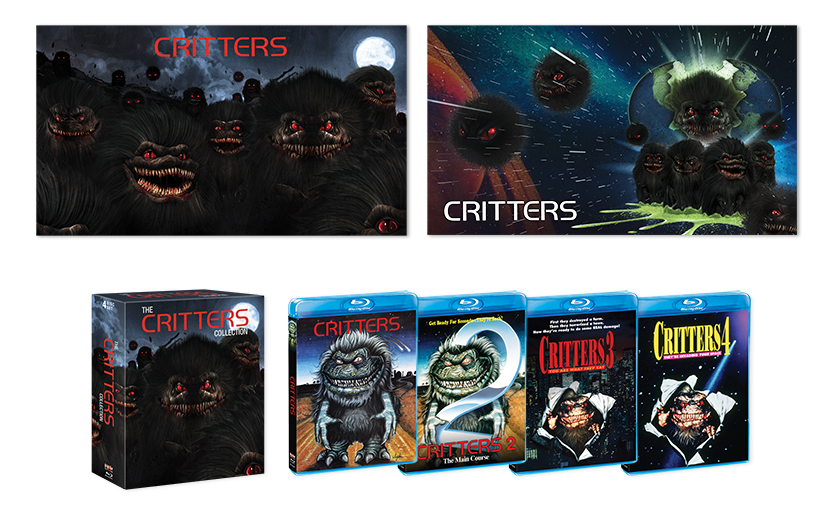 
They're back and ready to devour your Blu-ray player!

The terrifying and tiny menaces are out in full force with this four-film collection packed with enough Special Features to make any fan's mouth water!

In Critters, the terrified Brown family are trapped in a deadly nightmare and must fight for their lives against a litter of extraterrestrial, bloodthirsty monsters. But it's a losing battle until two intergalactic bounty hunters arrive, determined to blow the creatures off the planet! In Critters 2: The Main Course, some eggs have survived and are popping open, bringing another horde of the little creatures! Brad Brown (Scott Grimes) returns to fight them along with three bounty hunters. Critters 3 stars Leonardo DiCaprio as Josh, a beleaguered Angelino who must lead the fight against the little monsters as they invade an L.A. apartment building. In the final film, Critters 4, a super strain of genetically engineered monsters are designed to take over the universe. This time, Brad Dourif and Angela Bassett must battle the little bloodthirsty hairballs.


I grew up outside of the Critters bubble. I always knew what they were thanks to the posters hanging up in the videos tore of my childhood, I knew they were furry and monstrous but I didn't know the stories and origins of these amazing creatures until I attended a screening just two years ago at my local theater. From that initial screening, I was sold and absolutely in love with this world. I wanted to see every movie I could and learn everything about it. And since revisiting that along with the 3 sequels, I'm fully convinced this could be one of, if not THE, best scifi/horror series ever.


On this set, I learned even more. The commentary, behind the scenes footage, documentaries and stories told by cast and crew made me appreciate the not just the movie but the effort put into creating the Critters Universe. In fact, I do believe it's time for another Critters movie and hopefully the same crew can come back and work their practical f/x magic to give us some of that amazing Crite magic! On top of that, the featuring the iconic character Johnny Steele (aka Terrence Mann) is a song that will be stuck in your head for years! In fact, if this song doesn't appear on your iPod/iPhone playlist after one viewing, then there's something wrong...

As always, Scream Factory's biggest contribution to their releases is their fantastic extras. Alongside the new 2K transfers and multiple commentaries, this set features a LOT of extra goodies that could very well be worth the purchase alone:


If you're on the fence of revisiting these movies or just concerned about the high price, I can assure you, without a doubt, you'll get a lot more for your dollar than you expect. Documentaries and commentaries are usually what entice me about sets like this, and you get plenty. The new transfers of the first two movies also make the viewing experience almost better and even give you a grander appreciation for the movies.

If you've never seen these movies before and also worried you won't like them, I can squash those worries right now and tell you that the blend of scifi/comedy/horror/action makes a great viewing experience for all who dive in!