on November 05, 2018
Ahhh, it's that time of year! That amazing time of year where things go from spooky and orange to chilly and brown in the matter of just a few days. Still in the shadow of Halloween and still far enough from Christmas, Thanksgiving is just a mere two and half weeks away and it's time to kick those post-Halloween blues aside and soak up all the great things we can in this very brief time period. Besides, as soon as Thanksgiving dinner is over, you're gonna be thinking about Christmas. That's where the real stress begins. Don't believe me? Look at your credit card summary and just think of parking at the mall. But, that's ok. Just part of the Christmas season. You take the good with the bad. Mrs Garrett taught us that a long time ago and it still stands true to every part of our lives. But we'll worry about that bridge once we cross it.

But before your blood pressure goes up thinking about squeezing too much into December, let's just lay back, relax and enjoy what we have in front of us: the glorious Thanksgiving Celebration! Unlike, previous theme projects I've done, this one will be a real tasty treat. Yes, I'm fully aware I say that all the time, but actions speak louder than words and boy oh boy, is there a lot of action on my table these next few weeks! And what better way to kick this off than with a trip back to 1994 to revisit one of my most cherished memories of being both a Thanksgiving fan and a WWF fan? Yes, I'm gonna take you back to a time when wrestling was at one of it's lowest points, 1994. The WCW had just acquired Hulk Hogan in an attempt to boost it's name and it's biggest rival, the WWF had relied heavily on younger talent to boost it's brand. Sadly, wrestling wasn't as hip as it once was years before. But that didn't stop Vince McMahon from trying to make it relevant again. He'd throw his wrestlers at whatever venue he could to make his company bounce back from the crazy steroid trial they had been going through. Talk shows, sitcoms, whatever they could to get positive press, they would gladly sign up for. And one of my favorites? THE MACYS THANKSGIVING DAY PARADE!!!

(Apologies in advanced. The only source is a video on youtube and even then, it's super low quality.) 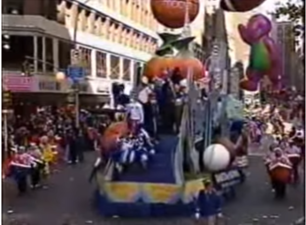 Ohhhh...I remember this bright as day. I believe it was announced on the Survivor Series(one of the companies biggest PPV's of the year) the night before that the best of the best would be appearing at the Parade. Heck, I was already gonna tune in to the parade but to know some of my favorites would be there? Just adds fuel to the fire, brother. Now what stands out to me now, is that show took place in Texas. Which means the wrestlers had to get on a flight pretty early to get to NYC to make this float happen. I'm guessing no sleep was on the menu for these guys that evening and the last thing they wanted to do was spend Thanksgiving morning on a float waving and acting like they loved their job. But, with the exception of one guy, they all made it work! 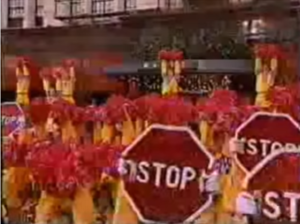 So, it starts off simple enough. A pre-float dance by a cheerleading troupe about driving safety kicks things off. Rather unassuming and innocent enough for a family friendly show. That is until we hear the immortal words of Mean Gene Okerlund. "WHO WILL SURVIVE?". Wrestling fans know exactly where I'm going with this...of all the songs to pick to play during a giant presentation in front of millions upon millions of people watching, why wouldn't it be THIS: 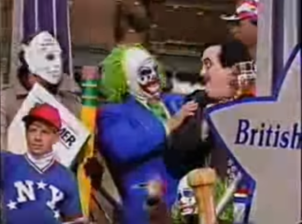 Yup. The very 1993 sounding "hit" song "Wrestlemania" by the WWF Superstars begins to play to introduce our most likely freezing cold heroes: Razor Ramon (or as Willard Scott calls him "Ray-zor Ray-mone") Paul Bearer, The Undertaker, Lex Luger, Davey Boy Smith, and Doink and Dink all come rolling down 34th street like a cannonball ready to greet the fans. Still remaining in character, it's clear the the stars and most energetic of the bunch were Doink, Paul Bearer and the Bad Guy, Razor Ramon. I'm guessing either that's a testament to their talent or the coffee in catering at Macy's was downright superb. 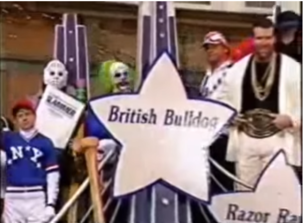 The float itself wasn't really anything to write about, as it was just a few NYC landmarks, what seems to be a hockey player, some sports imagery and a giant apple. Sure, you'd expect more, but hey, it's not every year we saw Razor showing off his Intercontinental title on the most beloved parade! 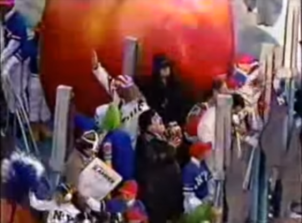 The hardest one to catch was The Undertaker since he kinda just stood in the back by himself, which made sense as his gimmick was that of an undead loner, mortician. He just kinda stood there in a long coat, which I'm sure in that weather, he had no issue doing. But sure enough, there he is! I know, it's kinda hard to miss a 6'7 ginger in a trenchcoat and a wide brim hat, but hey they hid him well. 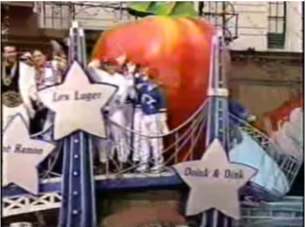 They didn't really do a lot on this float other than wave and act bored, especially Luger who clearly did not want to be there that morning, but it still was cool enough to make me excited as a young fan. WWF didn't pop up much, but when they did, I was always ready to soak it in. And while I sat on a couch in my mom's time share in the Outer Banks, I was soaking it all in. It was enough to make me race in the other room where my mom was reading (most likely wanting some peace and quiet) and I screamed DID YOU SEE IT? DID YOU SEE RAZOR RAMON? DID YOU SEE THE UNDERTAKER? THAT WAS SO COOL! If I recall she just nodded and said "yeah, they looked great!" or something and went back to her book. My mom knew wrestling meant so much to me, but sometimes she had to humor me to shut me up. Moms are smart like that. They won't hurt your feelings but they won't lead you on to how much they don't care.

The WWF would participate in later parades with much more elaborate floats. The one I remember the most was 2001 and 2002 when they had a ring float, commentators table, a giant screen and several superstars waving. A big highlight is when some reffered to Jerry The King Lawler as Jerry The RING Lawler, unbeknownst to the King. I'm sure he had a good laugh over that one after he heard about it. The later floats looked great and more high tech, don't get me wrong but nothing is as special to me as the 1994 float. Besides, the later floats didn't feature that insanely ridiculous Wrestlemania song now did they? 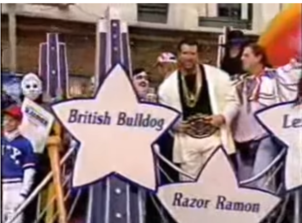 For the record, every year since 1994, I've held out hope they'd return for another float. Maybe this year? Who knows? Maybe we'll finally be able to see John Cena as he elbow drops a Snoopy Balloon or even see Matt Hardy and Vanguard 1 welcome the viewers to the Hardy Compound Float? How DELIGHTFUL!

For a fun flashback, you can read my review of the amazing 1989 Joker float from last year's Thanksgiving Celebration here.