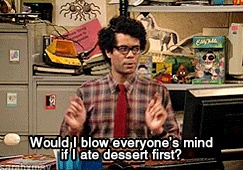 No. Not at my table it wouldn't, Moss. In fact, I'd encourage it because what better dessert to start off this countdown with than THE CARVEL TURKEY CAKE?!?!? 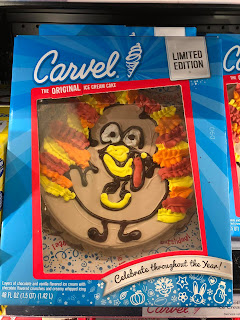 Carvel cakes have always been a missed opportunity for me as a child and as an adult. I never had a Carvel near where I grew up. It was always Baskin Robbins, which wasn't bad, but as I got older, I'd hear friends discuss the marvels of a CookiePuss and other specialty cakes to the point that I've wanted to buy one myself to just to try it and enter a sugar infested flavor town like I've never before experienced. So, the other day I decided I'd get one of their pre-made cakes at the local grocery store. They had a Halloween Pumpkin ice cream cakes that I had waited long enough on because they had been taken off the shelf by the time I was ready to make my purchase. But the good news was, I was blessed with a much more elaborate cake that would bring an even bigger smile to my face. Look at it. How does that turkey not make you wanna do backflips in the aisles when you lock eyes on it? In this case, no would blame you or judge you. If you wanna dance around like Shawn Michaels too, no one would look at you differently. But only if you had a Carvel Turkey cake in your arms. Otherwise, you may get strange looks. 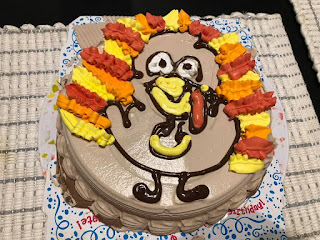 Unlike an actual turkey on Thanksgiving, you don't have to feel regret about eating an innocent animal. You probably will feel regret about the insane amount of ice cream and frosting but Thanksgiving only comes once a year! While we look more towards warm and comfort foods this time of year but there's always wiggle room when it comes to holiday treats. An ice cream cake filled with frosting and chocolate cookie bits? That's welcomed in my house all year round, especially Thanksgiving. 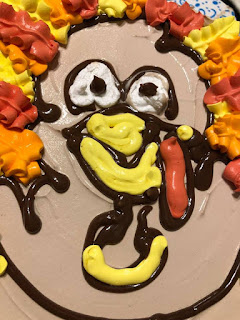 I'm ready. Or am I? Either way, this is the moment that The Fates have decided to be my moment of victory. I find it fitting that this would be my cherry popper as there aren't too many cakes out there in the form of a freakin' turkey. The detailing on this cake are second to none. With chocolate syrup outlining the turkey itself, it's gonna be a crime to destroy such a masterpiece, but art comes with a price. Let's see how this badboy tastes... 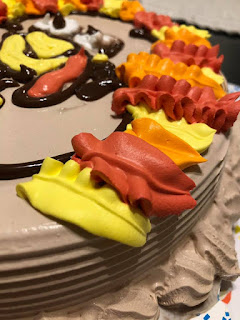 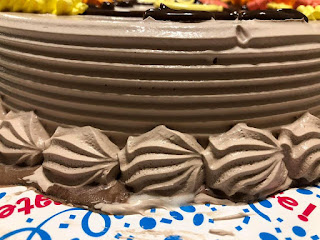 Well, the rumors were true. This thing is absolutely packed with frosting on the outside with a decoration to make anyone feel like it's their birthday at anytime of the year. Visually, it has all the makings of a perfect source of a sugar coma. In fact, upon first glance, I'm pretty sure I was scheduling enough time to eat this and a good extra hour afterwards for a quick nap. Some desserts I can handle but this? It's overwhelming just looking at it, but the taste was even more impressive. 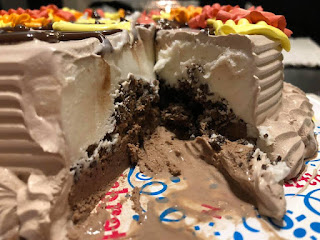 Here we are, folks. I was pretty blown away. It was like those drug scenes in Requiem For A Dream, except with sugary ecstasy. I've had some amazing ice cream cake in my day, but nothing quite as stupendous as THIS! The exterior frosting seemed to have been just a warning as to just how insane this cake would be. The amount of chocolate crunchies mixed in with the ice cream was just so perfect. Not too much, not too little but just the right mix. In fact, letting it melt a bit helped it big time, as everything just blended together almost like a giant bowl of ice cream should. Except in the form of a cake. A sexy, sexy, sexy cake. Well, you know... 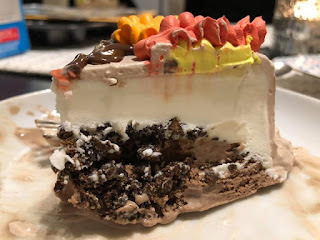 I felt almost empty waiting this long in my life to experience this as I'm positive someone in my social circle as a child would've had to get a Carvel cake. But I would've remembered something so smooth and intense. I can almost guarantee I would've begged my mom to find a Carvel within at least 500 miles to get me a cake. She wouldn't have done it, but I still would've asked. And you better believe I would've asked, gosh darnit. I would've been a brat about it too. Oh I would've been downright rotten in requesting a Carvel cake, let me tell you. 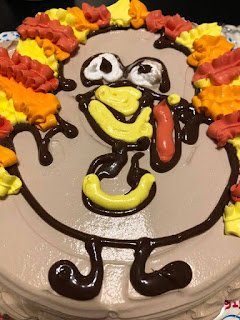 What was my first Carvel cake like? Amazing. And for it to be a Turkey themed cake makes it even better and just gets me in the mood for more for the goodies in store for this season! A nice way to bring that frown upside down and if I may be so bold to say, Christmas treats will be put on notice if Carvel does a cake for that season as well (I think I've seen a Christmas Tree cake before.) Now I have to just find an actual Carvel near me and take on that legend known as CookiePuss!


If this is how I begin my Thanksgiving, I can only imagine what more fun lies in store for me!