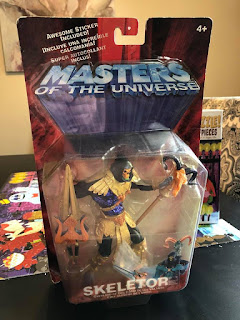 One of the great contributions to the 200X line was of course the awesome (and sometimes painful to hunt down) chase variants. A lot of cool colors and thought were put into these and it gave us some great looking figures. Of course, one of my favorites in the entire MOTU history was a variant and it's one I wanna dig into today... 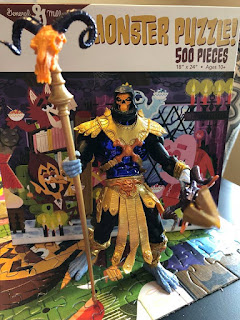 There's a lot of names this one goes by: Fruity Pebbles Skeletor, Disco Skeletor, but my personal pick for it is "Halloween Skeletor". Just look at it. Does that not scream Halloween to you? I don't exactly think it's "disco" but I suppose I can appreciate the term. Taking the basic Skeletor and slapping a different coat of paint on him is nothing new. Skeletor already received an inverted skull and crossbones variant but this enters an almost psychedelic level with this. I mean, a golden/orange-ish body with black highlights? That's a new one. 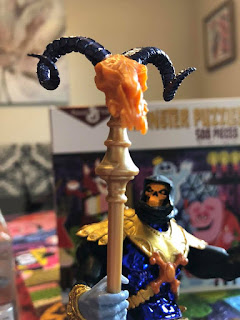 Plus, gold/orange/black weapons? Who's gonna truly fight a guy with a skull and gold weapons? That's straight up out of a horror movie or the CVS Halloween aisle. If they want to really add extra flair, they'd make it smell like a cheap CVS pumpkin candle even if that's Stinkor's gimmick, Skeletor is evil enough to steal that. He's a dick. 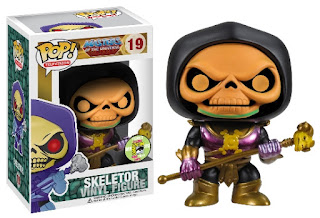 Despite what you may believe, a candy corn colored Skeletor was not the most popular figure from the line. He was memorable enough to receive the Funko Pop treatment as a SDCC exclusive years later and has gone on to become a very rare one at that. So while fans didn't embrace him as much, it's pretty awesome to see it left an impression on someone enough to create it! 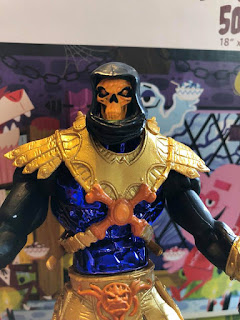 On top of that, I can't help but think this is the closest we'll ever get to a Golden God Skeletor from the live action movie. Still waiting on that one, Mattel. Until that day comes, I'll be happy to call this my favorite Skeletor figure of all time for it's crazy paint job and the fact that I can use it as a Halloween decoration all year round. I think Skeletor can appreciate that.