on August 01, 2018
Both He-Man and Skeletor got their time in the sun with their respective playsets, but what about Hordak? Surely he can't be left out in the cold! The line changed for the better once the Evil Horde debuted so it was pretty much guaranteed that The Evil Horde had their own playsets too. Fair is fair! If Skeletor gets Snake Mountain, shouldn't Hordak get SOMETHING? Well, he did! In fact, he got two playsets: The Fright Zone (which I'll be covering later this month) and obviously today's subject: The Slime Pit. 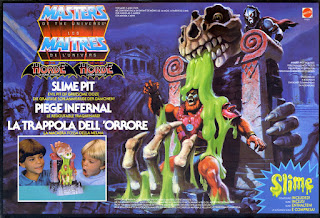 If you were a kid and played with He-Man, it was a sure bet you were into weird stuff. Sword, sorcery, horror, monsters and of course slime. As a child, I couldn't get enough of the stuff, no matter how messy it was. Of course, most of the times, I wasn't the one cleaning it up if it got stuck in the carpet (sorry, mom) but it was worth the mess. In fact, I'm pretty sure every successful (read: weird) toyline had some form of slime. Ghostbusters, Ninja Turtles, Toxic Crusaders all featured their own variant of this amazing green glop. While I had my share of other toys that featured it, Slime Pit was always the one that eluded me. Until now. I finally own it and can experience it as I had always wanted to. I had the Flushomatic from the TMNT line which was somewhat similar, but this was always on my toy grail list. Why wouldn't it be? Just look at it! 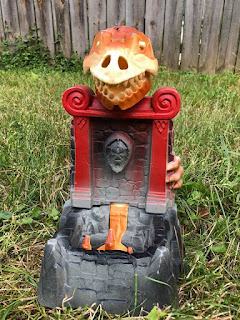 To paraphrase Evil Lynn "After all this time...The Slime Pit...is mine...". Impressive. I've only seen photos of it, but never actually held it, studied it, played around with it. For such an iconic piece in the line, I always thought it would've been bigger in scale. Now, that's not a knock on it at all. It's a pretty awesome piece to behold. I guess in my mind, I always figured it to be much larger since it's legend is larger than the actual toyline itself. But that's allright. It's still a fun piece to own. And...yes, ok...play with. You think I bought this and had no intention on playing around with it? Don't be ree-dic-u-lous. The main gimmick of The Slime Pit is to turn anyone you place in the chamber into a mindless slave to serve Hordak in his battles against He-Man and Skeletor. Of course, there were obvious exceptions according to the instructions that came with it: 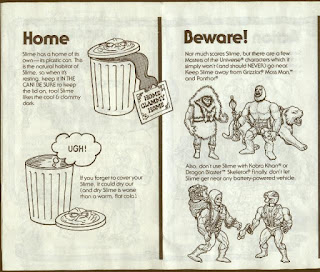 Well how about that? Khobra Khan,  Dragon Blaster Grizzlor and MossMan should NOT be included in your twisted, kinky torture. And somehow Panthor? I mean, ok the figures I get, but there's no way you'll fit Skeletor's giant panther in that thing. The last thing you truly wanted to do permanently damage those figures. At the same time, this sounds more like a dare on Mattel's part. They're no fools, they know how to get their money. You just know they were hoping kids would disregard the rules (more like a suggestion) and slime the heck out of these two just so they'd buy more. MossMan was rather inconsequential to the rest of the line, so no loss there, but Grizzlor was a big deal and almost a semi-main event guy, so kids were more likely to want him again. 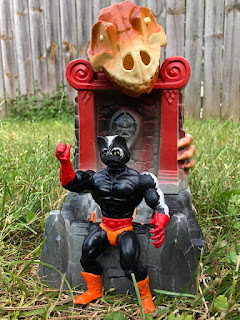 So here we are. The moment I've waited all these years for, has finally arrived. It's slime time. So sorry Stinkor, I love ya, but I need a patsy for this. 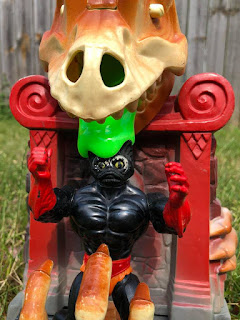 The claw is an interesting choice as a restraint. Although, considering all the weird gloom and doom, it totally makes sense.  Hordak and his boys aren't gonna have the time to strap someone to that wall or something. By the time they'd be done holding their prisoner, they'd be slimed too! 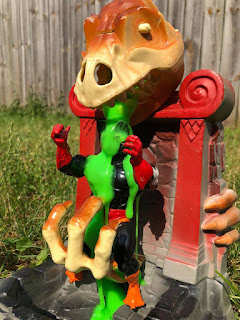 Whew! Look at that slime. If Stinkor loved his foul odors before, he's gonna love this. The slime I used wasn't the original slime, obviously, but it's just as gooey and smelly as the old slime was 30 years ago. Now, I'm not the biggest fan of the clean up after, but watching this is super cool. I feel like a kid again. Even if it means messing up my sister's lawn and having to clean it up afterwards. Worth. It. 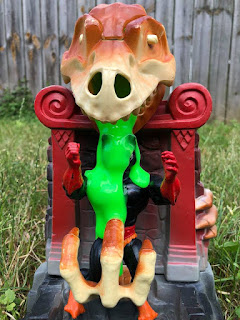 Love watching the sliming process take place. Especially since this was a somewhat windy day, so watching it sway around and cover Stinkor was extra fun. It was like watching snot pour from some sick nose all over their toys, which I'd find hilarious. 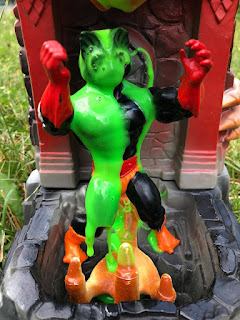 So that's pretty much it. Other than a medieval/gothic design, it only has one function. The notoriety and legend is based upon it being the first slime based playset as well as just being so cool looking . We've seen Mattel return to this concept multiple times in multiples lines, including an unreleased repaint/retooling for their King Arthur And Knights of Justice and even a Slime Pit inspired playset for their Harry Potter line. But this wouldn't be completely the end of the MOTU/Slime Pit connection... 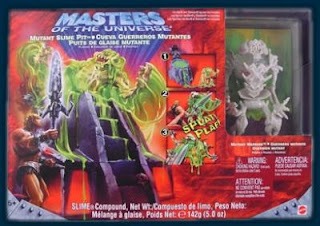 The 200X series also got a fun and different take on the original. This time around it was used for Skeletor to torture his enemies. Instead of an electric chair type gimmick,  it was more of a trap door/pit including a Mutant figure! While this was a cool playset and add-on to the line, it wasn't as popular as I'm sure Mattel had hoped, even though it did retain it's horror/monster feel, but I thought it was a lot of fun and a nice take on an old classic. To date, there has yet to be a Slime Pit for the Classics line or the Super 7, but who knows, kids love slime and destroying their toys without actually destroying them. Afterall...Mattel (through their Fisher Price brand) did just release this for their Imaginext line...

Hmm...Interesting...So you're telling me there's a chance?